After Finals Fun, Books, and Gardening

Wednesday afternoon the Senior 1, 2, 4, and 5 students finished their final exams and began a week of leisure as they wait to receive their grades.  They still have their regular chores to do but other than that, they have time to watch movies, play sports and games, make bracelets, etc.  I was really missing my time with the girls when they were in finals week so I am so happy that they are done and we can spend lots of time together. 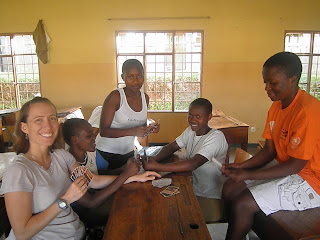 The last two mornings I passed out embroidery thread so they could make bracelets.  I had to come up with a system to pass out the colors in an orderly way; otherwise the girls swarm around me and put their hands in front of my face so their hand is the closest one when I pass out the strings.  That was crazy!  Finally I decided to pass out the strings in a slow but less chaotic way.  The girls stand in a circle around me and I go around the circle asking them to pick one color, which I then distribute.  I keep going around the circle until the strings run out for that day or everyone has five strings.

I've also been playing a lot of cards with the students.  I taught them Crazy Eights when I first arrived, but since the redundancy week began, I've taught them Spoons and Slap (aka Egyptian Ratscrew).  I have plans to add Rummy, President, and Nertz to the mix once enough girls know the other three games.  A deck of cards is a great thing to bring on any trip; people can be entertained for hours with something that takes up hardly any room in a suitcase.

Yesterday was the market day (Rita and I shop on Fridays) and as I walked home from the market, I said a little prayer to the Lord, which was, "Lord, it would be really nice if the package Carl mailed to me was finally at the post office."  And sure enough, after a week or two of waiting expectantly for the books he sent, there was a note in our PO box saying I had a package in the office.  It took 27 days to arrive.  I was so happy and even happier when I saw what he sent.  Thanks to Carl Bunderson, my Augustine Institute classmate and Denver friend, I now have the entire Chronicles of Narnia, Wuthering Heights, and Jane Eyre to loan out the girls and then leave for the school library when I return home.  Thanks a million, Carl!

Lastly, Rita's and my garden continues to grow.  It's a great source of satisfaction for me.  My Saturday routine is to wake up, eat, and then head out to the garden before it gets too hot.  Even today at 8 am it was warm already.  Saturdays is when I plant new seeds and I think the plot might finally be at capacity.  In the course of the past 3-4 weekends, Rita and I have planted corn, beans, zucchini, cucumber, cilantro, spinach, parsley, red onions, carrots, cabbage, and two varieties of lettuce.  The beans, carrots, onions, and lettuce have been up for a few weeks now.  The corn is just starting to pop up and the first two cucumber seeds have sprouted.  I'm still waiting for the other two cucumbers, two zucchinis, and the spinach to sprout.  I planted extra lettuce today to fill in the gaps where the previous seeds didn't sprout.  On the other days of the week, I will often swing by the garden to look for new growth and to pull weeds.
Posted by Heather Q. at 11:00 AM