Most weekends I spend in Butare.  I sleep in and then work in the garden on Saturday mornings.  On Saturday afternoons I usually catch up on emails or spend time working on crafts and talking with the students.  Sunday there is morning Mass and then some event to attend, either a lunch to celebrate the presentation of a baby at her church or tea and beignets (think of a plain donut) with the sisters next door.  Sunday night I try to eat with the students.

The past two weekends, though, I've had the opportunity to travel and recreate outside of Butare.  On October 27, I crammed into a bus designed for 15 but carrying 18 members of the local Emmanuel Community and we headed off to Kigali for the wedding of two other EC members, Francoise and Theoneste.  We had two buses so there were almost 40 of us who headed out of town at 7 am and returned after 9 pm.  I attended the dowry ceremony in the yard of Francoise's family house, followed by the Mass at Holy Family Catholic Church (where I sang in the choir), followed by the reception, which rivaled any reception I've seen in the US.  I plan to write about the wedding and dowry rituals in my second mission report so you'll just have to wait for that. 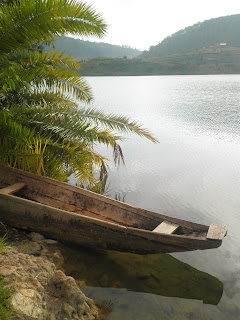 This past weekend I went to Lake Kivu with a large group of expatriates: an Australian family of five, the French Fidesco family of six, an American dad with his three boys, a married Englishman whose wife is out of the country right now, and four of us single folks from around the world (Portuguese, Australian, Rwandan, and American).  Our destination was the Kumbya Retreat Center, which is a place for Protestant missionaries to relax and is about halfway between Cyangugu and Kibuye.  I'm not Protestant, but the Australian family is so that is how we all
got to go there.  We stayed in two cabins that are without electricity or indoor toilets, but there is a flush toilet outside one of the cabins.  The schedule for the weekend was basically sleep, eat, swim, repeat.  I'm not much for taking naps so after lunch I taught the French girls how to make friendship bracelets and played Uno and Rummikub.  Saturday night I watched lightning flash through the sky from the back porch of one of the houses and then enjoyed the fireplace inside. 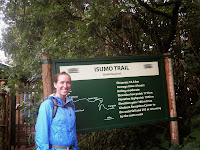 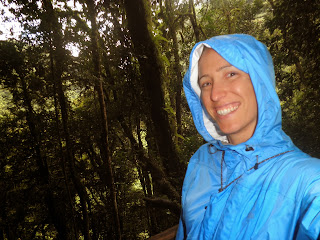 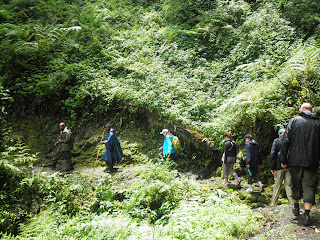 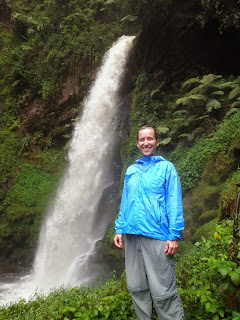 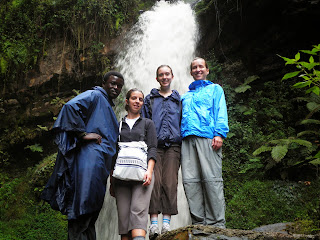 On Sunday, my car stopped at the visitor center in Nyungwe National Park.  We four single people and the Brit paid our money and met Narcisse, the guide who would take us through the fields of tea owned by the Gisakura Tea Plantation and into the rainforest protected by the park.  The destination was a waterfall about three miles away.  I loved it!  My hike in Nyungwe was the highlight of the weekend.  The tea fields have the neon yellow-green color that reminds me of spring in Minnesota and that's because the harvesters pinch off the top 3-5 leaves for tea and then new leaves grow and have the yellow-green color.  The rainforest is so lush, with moss and plants growing out of the bark of living trees and vegetation everywhere. And it's definitely a rainforest.  It started to rain when we were in the tea fields and continued as we entered the forest.  Eventually the rain stopped and only the drops from the trees continued to get us wet.  Thanks to the rain and it being the rainy season, the waterfall was very full, creating a spray that was visible from far away and that made it hard to keep camera lenses spot-free.  As I walked, I was reminded of the days I spent backpacking in Costa Rica with Outward Bound.  That too was an equatorial rainforest during the rainy season and the similarity between the two forests made me wish even more that I had my backpacking gear with me in Rwanda.  I would love to spend days backpacking (with a guide, of course) through the forest. 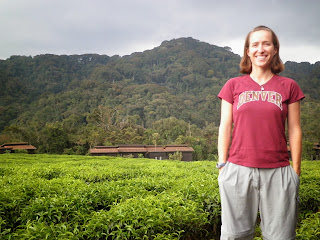 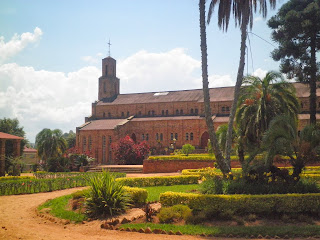 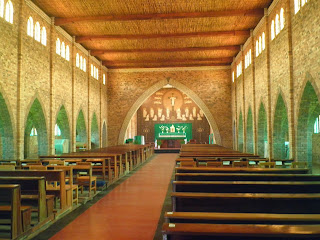 Lastly, this wasn't a weekend activity, but yesterday I was invited to travel with the cathedral's pastor to the major seminary on its patronal feast day of St. Charles Borromeo.  I attended the Mass in the seminary chapel and the sight of the orange bricks and 120 seminarians in cassocks (the religious dress that is normally black in the US) reminded me so much of my time in Denver and attending Mass at the Christ the King chapel attached to the seminary.  How I love the sound and sight of many men singing and planning to give their entire lives to the service of the Lord and his Church.  After the Mass, there was a graduation ceremony to pass out their degrees from a Roman university and then the reception.  The seminarians played guitar, sang, and recited poems.  The bishops gave many speeches, which were translated by the pastor who invited me.  After the reception was over, some priests, religious sisters, and myself were invited to the rectory for some more drinks and celebrating in honor of Jesus, the Good Shepherd, and the men who are being trained to be shepherds after his own heart. 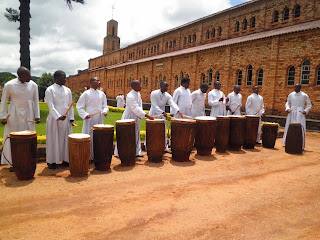