One of my Side Missions and a Garden Update

Early on in my Rwandan time (2 days from now marks 4 months already), I was asked by the priest across the street if I would be willing to teach English one hour a week to the eight novices who live with him (one Rwandan, one from the Central African Republic, one Congolese, and five Cameroonians).  [Novices are men in their first year of studies to be priests for a religious order/congregation, such as this group of men who are with the Missionaries of the Sacred Hearts.]  Since I didn't have any regular commitments yet, I agreed and for probably 3 months now, every Monday I walk across the street to teach from 8:30-9:30 pm.
It is such a joy for me.  Sometimes I feel lazy and hope that when I ring the bell at the gate, no one will answer so I can go home and have a free evening.  That doesn't happen, though; the door in the gate opens and I am greeted by Gustin, Albert, Ivan, Fidele, Gideon, Archange, Shadrach, or Wilfred and I instantly feel happy to be there.  I walk into the classroom and some of the men are waiting at their desks for me; we greet each other, ask about the week, and soon the last man arrives.

Since I'm not an English teacher by profession, I'm making up the lessons as I go.  I use grammar books I borrowed from the school library to get an idea of what I should teach first and how to teach it.  I'm grateful for the books and the grammar section in my English-French dictionary because they clue me in to the rules of the English language, things I might have learned in school 20-25 years ago but have long since forgotten.  Now I don't remember many of the rules; I just know what sounds right when speaking or writing, which doesn't help a ESL learner learn (such as why some simple present verbs end in an "s" and some don't, as in the example, "I like" and "he likes").

Anyway, the topics aren't the reason why I'm writing this entry.  It's to share what a joy it is to have the opportunity to teach them and to become a part of their community and them a part of mine.  What I love about being them is watching them razz each other about all sorts of things, listening to them laugh (often), seeing their kindness towards me and their brotherhood with each other.  I always come home from teaching them filled with joy and contentment.  I also occasionally attend Mass in English on Tuesday mornings at their house and I smile to hear them say the words of the Mass in English (the fruits of our first lessons together) and to watch them play their instruments and sing songs of praise.  They get so into it.  I already know that when I look back on my time in Rwanda, I will fondly remember my one hour a week with the novices and then I'll laugh.  They always make me laugh. 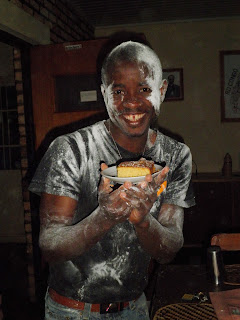 Here is an example of how they have become a part of my community and me a part of theirs.  Last Monday we were talking about the months of the year and I had them tell me when their birthdays are so they could practice saying dates in English.  Fidele said his was Dec. 10, which was the very next day.  I asked the other men if they were going to do anything special for Fidele, like have a birthday cake or a party.  They started joking about having nothing special and in fact, they were only going to drink water (see what I mean about razzing each other?!).  I decided that I would make the day special for him so the following day, Fidele's birthday, I made a cake and arranged with another one of the novices for my roommate and I to come over at the end of dinner to surprise Fidele with it.  It turns out he was the one to open the door for us so we shooed him away, put the candle in the cake, and walked into the dining room singing Happy Birthday.  Soon the dispersed novices were all gathered in the room, joining us as we sang Happy Birthday in many languages, and Fidele blew out his first ever birthday cake candle.  He's had birthday cakes before but never with a candle.  Needless to say, he was really touched (and soon covered with flour, courtesy of the other novices) and Rita and I spent 2.5 hours laughing and eating with him and the rest of the novices.  I plan to continue the tradition of honoring each of their birthdays with a cake.

Before I end this post, I wanted to include a quick garden update because I was looking at last month's pictures and I can't believe how much the garden has grown.  Here is one of the pictures taken November 18 that made it into an earlier post.  The corn is so small.  There's a lot of soil showing.  Then the picture from five days ago shows a radical transformation.  The corn stalks are huge (some are taller than me) and growing extra support/stabilizing fingers near the base.  The lettuce grows faster than we can eat it.  The carrot tops are full.  The onion tops stand a foot high.  The cucumbers have climbed high up the sticks I imbedded next to them and tomorrow I'll pick off the first cucumber.  A few days ago we cut the first mystery gourd but have yet to cut it open.  I think it will be time to harvest the red beans soon.  It truly is amazing to see how fast and big everything can grow with just sunlight, water, and soil nutrients. 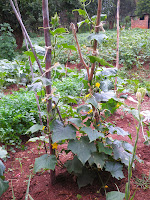