The Missionaries of Charity Orphanage and Christmas Plans 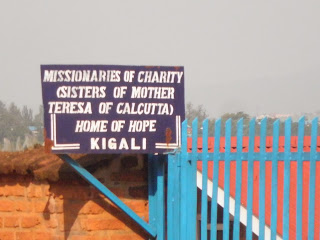 Rita and I have started our Christmas vacation.  We are using vacation days to have off from December 18-January 1 so here is the news on how we spent the first half of the break and what I will do for Christmas (everyone asks).

On Wednesday, December 18, Rita and I took the bus to Kigali, the capital.  Kigali sure is a different world from Butare.  There are skyscrapers, ethnic and expensive restaurants, cars everywhere (which cause rush hour traffic jams), grocery stores with products from the U.S., Europe, and India, and white and Asian people.  On one hand I could get used to such a life in Rwanda, but on the other hand, it didn't feel African enough.  I stayed until Sunday night, but Rita returned home on Saturday morning. We stayed with Megan Lyons, an American girl that I was in email contact with through a mutual priest friend from CO.  Her roommates went home for Christmas so she had room for us.  She was super hospitable and showed us around.  The best part about staying at her house was the huge screened in front porch (Minnesotans would be jealous).  We ate our meals out there and read in the morning on the outdoor couch.  I would like a porch like that.

What did we do?  The highlight was volunteering at the orphanage run by the Missionaries of Charity (Mother Teresa's sisters).  Unfortunately taking photos isn't allowed so I don't have great pictures to accompany this post.  We arrived on Wednesday in time for the afternoon visiting session from 3-6 pm.  We returned on Friday for both sessions, staying from 9:30 am-12 pm and then 3-6 pm.  It was a joy to be with the children, but it was also eye-opening, shocking, and saddening.  Let me explain the disheartening part first.  The orphanage has two main day rooms and a playground where the children spend their waking time.  One room is for the babies and I counted 21 babies.  There are metal cribs lined up all around the room, one right next to the other.  There is a mat in the middle of the room for the babies to sit and lie on.  I don't remember seeing any toys.  In the other room, there are 12 special needs kids (maybe 2-8 years old and mostly suffering from what looks like severe cerebral palsy) and 12 able-bodied kids (~2.5-5 years old).  One part of the room has tables for meal time and the rest has two cribs, plastic chairs, and a mat.  Again, I saw very few toys, just a stuffed sheep and a Matchbox car.  The outdoor play area did have a swing set, a slide, and a merry-go-round.  Each room had 2-3 staff workers to attend to the children and sometimes the sisters would come down to hold the babies or visit the older children.  You can imagine 24 kids, experiencing the terrible twos or needing to be fed or acting up out of boredom or the desire for attention, being managed by 3 workers and whatever volunteers are there that day.  If I had to pick an orphanage to live at, one run by the Missionaries of Charity would guarantee I would be treated as a person with dignity and worth so that is where I would choose to be, but still, it's an orphanage.  There aren't enough workers/volunteers to give each child the affection and attention they need and desire, which they would have a better chance of having in a family

A sad fact that I learned while there is that the odds of the kids being adopted into families aren't great because foreign adoptions from Rwanda aren't allowed currently, which means only Rwandan nationals can adopt.  That breaks my heart because there are so many kids in orphanages and I know so many of you and given the chance, I would try to win your hearts over to one of these kids so they could become a member of your family.  If I was married and there wasn't a foreign ban, I know which kid I would want to bring into my home.  Her name is Jessica and I would guess she's around 5 years old.  The first day she came across as a trouble maker, crying a ton when she wasn't allowed to do what she wanted to do, taking the few toys from other kids, not listening to the workers, etc.  On the second day I decided to not react to the bad behaviors she displayed (thereby not giving her attention when she was acting up), but then to call her to me and give her attention when she was being good.  It worked!  She quickly got bored with taking the brush I was using to comb a toddler's hair (my first time combing and braiding African hair!) and put it down.  Then at the end of the day, I pulled her into my lap and we had 10 minutes of one-on-one time.  I tickled her, gave her hugs, showed her how to make different sounds with my mouth that she tried to imitate, and protected her from a handicapped adult (also present on the compound) who would reach out to bop her on the head or shoulder.  One time she stuck out her tongue and blew raspberries at me and I told her, "Oya.  If you do that again, I'll put you on the ground."  She smiled and a minute later, this time did it away from me.  I said it again and then she stopped.  That showed me that she can and will be good if she gets positive attention.  And as my mom pointed out, since she's probably the oldest able-bodied kid in the group, she is probably bored and acts out to have something happen, even if it's negative attention.

The best part about being at the orphanage was getting to give love to all those kids.  I tried to spend some time interacting with each of the special needs kids by holding them (such as one boy who is five years old but has a very small body and can't move or talk because he has fluid in his brain) or picking them up by the arms and hands and helping them walk awkwardly around the room.  Even though none of those kids can communicate, I could tell that some of them understand what is going on and what is said to them because they would smile when I called out their name or beckoned them, get agitated when I put them down on the floor to move onto another child, and get excited when it was their turn to walk.  At one point I had three of the boys lying on my legs and one would laugh so much when I tickled him, another wanted me to hold his hand, and the other wanted me lie on me also.  For the able-bodied kids, I didn't spend as much one-on-one time with them, but I took turns pushing a few of them on the swing or inviting a group to sit on the merry-go-round so I could push them in it.  I helped a few of the younger ones finish their food when they were tired of feeding themselves.  As I wrote earlier, I was given a comb, brush, and a bottle of oil and asked by one of the sisters if I could comb a toddler's hair.  It was my own initiative to braid it.

So that's it for the experience at the orphanage with the children.  After the evening sessions both days, Rita and I joined the sisters for an hour of prayer, which was in English.  Woohoo!  We took advantage of the many grocery stores in the area to expand our food selection at our house, which benefited mostly from a visit to the Indian store where we bought dried lentils and chickpeas, chickpea flour (to try to make a corn tortilla/crepe), and popcorn kernels.  We also learned there is an American-style movie theater that plays current movies so we watched The Hobbit 2.  I never would have guessed I'd get to watch a new release in Rwanda.  What a treat!  Another treat and a first for my time in Rwanda was having good-tasting Mexican-ish food.  The Butare American family is in Kigali right now because they had their baby boy up there and they took us to Meze Fresh, a Chipotle-like restaurant.  My first good tasting Mexican food in 5 months!  It cost the equivalent of 7 days worth of unlimited internet, but it was sooooo worth it.

After Rita went home, I attended the national Emmanuel Community weekend retreat in Kigali.  Each day there was praise, Mass, adoration, and a talk.  Everything was in Kinyarwanda and while people translated for me, I often lost focus and then fell asleep during the long talks.  The highlight of the retreat was getting to meet community members from other parts of Rwanda and staying at the home of a newly married couple.  Agnes and Placide speak English well enough so we stayed up late socializing and eating.  The differences between American and Rwandan traditions and culture is always a source of hours of conversation.  I took the bus home with members of the EC, once again with one more person per row than the number of seats, and arrived home with lots of joy.

As to what Christmas will look like out here, tonight Rita and I are having a festive dinner with the sisters who live next to us, followed by midnight Mass.  If the timing works out properly, in between the two events I'll join an EC family as they and a large group of other families walk to the edge of town to a cowshed where they will sing praise songs.  Since Jesus was born in a stable, I think it's a beautiful plan and hope to be able to join them.  On Christmas day, I'll spend the day at a local Benedictine monastery with the Butare members of the EC.  We will eat, sing, play games, and I don't know what else.  Rita will hang out with a Brazilian religious congregation.  After Christmas we'll spend a few days in Butare and then head back up to Kigali for a day trip to Akagera National Park (http://www.african-parks.org/Park_2_Akagera+National+Park,+Rwanda.html) and more time hanging out in Kigali.  We'll be there until the 1st and then school starts up on Jan 6.
Posted by Heather Q. at 5:52 PM