Christmas, the New Year, and Everything In Between 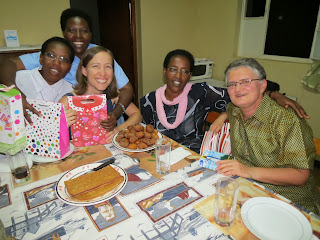 First, Christmas in Rwanda.  I was worried that this would be the hardest Christmas I ever lived because of the language barrier, but that was not the case.  Christmas Eve and Christmas Day were very joyful.  Rita and my Christmas Eve celebration didn't begin until 10 pm.  We waited for the sisters next door to get home from Mass and then we went over to their house for a late dinner.  Earlier in the week, the head sister had asked what is traditionally made for Christmas in the US and I told her that for my family, the tradition is to make pizza (my mom's side is Italian).  So she told me to make pizza and the sisters would take care of the rest.  Little did I expect that they would adopt my tradition themselves, but they did.  When Rita and I arrived at their place, there was our American pizza and their Rwandan version of pizza to eat.  I was very touched that they took on my family's tradition.  Before eating, though, we gathered in front of the Nativity scene, prayed, and sang the refrain to "Angels we have heard on high."  After thanking God for the birth of Jesus, we stuffed ourselves with pizza, salad, and desserts Rita had made from our garden's pumpkin.  Sr. Marie Rose, the head sister, surprised the rest of us by disappearing before dessert and returning with gift bags for all of us.  Each bag contained an apple, an orange, and a chocolate bar (it might not sound like much, but all three are pricey so we rarely, if ever, buy them). 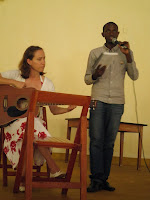 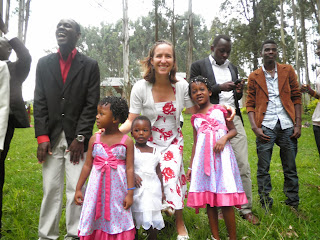 I spent Christmas Day with the local members of the Emmanuel Community, the international Catholic community to which I belong.  120 of us went to a nearby Benedictine monastery and spent the whole day there.  We sang praise songs, had Mass, watched the children perform a Christmas play 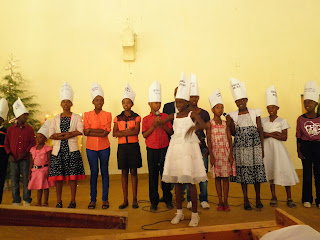 , ate lunch, played games outside, and danced.  During an interlude between activities, I was even convinced to sing and play guitar for a few songs (how happy I was to play a guitar for the first time in 5 months).  One thing I noticed during the dance is that with the Emmanuel Community members, and in Africa in general, I am willing to risk looking dumb or uncool or whatever.  Normally I don't like dances that are free form, people dancing in a circle, etc.  I always felt insecure and like I wasn't a good dancer, but here, I soon got over it and enjoyed myself.  I think it's because the Rwandans are impressed whenever I participate in their cultural activities so that gives me some street cred no matter how I look or sound. 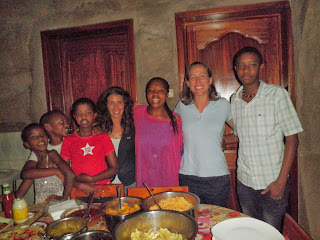 Dec. 26 and 27 were days to spend around the house.  I spent lots of hours in the garden, including harvesting and shelling black beans.  I tried again to make a Mexican meal and again, it wasn't the greatest.  Chickpea and corn flour crepes are a great improvement on the corn tortillas I tried to make in my first weeks here, but still, they aren't to the level of ordinary tortillas.  Rita and I did venture out to have dinner at the house of an Emmanuel Cty family that is in my small faithsharing group.  They really laid out a spread, as you can see in the picture.  There were French fries, rice, green bananas, meat, sauce, and salad.  We brought a pumpkin cake, again, the fruit of our garden.

On the morning of the 28th, we headed back to Kigali for the second half of our vacation.  This time around, there was a lot of lounging around Megan's house as we talked, read, or slept.  We were graced with the presence of Fr. Mike Rapp from the Denver archdiocese.  He is currently studying in Rome and was in Uganda with a priest friend from there.  He took a short trip down to see Megan and visit the shrine of Our Lady of Kibeho.  One benefit of having a priest around is that we three ladies and Timothee, the French Fidesco volunteer working in Kigali, were able to have a private Mass in English on Saturday night.  This was super helpful to Rita, Timothee, and I because we had an early morning departure the next day to go to Akagera National Park.  Without the Saturday night Mass, which is rare in Rwanda, we would have had to make sure we were back in time to go to a Sunday night Mass, which is also not easy to find.  But since we had our intimate Mass, we were carefree as we were picked up at 5:30 am on Dec. 30 for the 2 hour drive to Akagera NP.

Akagera preserves Rwanda's savannah so we were able to go on a safari drive.  I could call it a poor man's safari because it costs significantly less to go there than a normal safari would, but I guess the animals aren't as plentiful.  I didn't mind though.  I was impressed by what we did see, which were zebras, giraffes, impalas, water bucks, monkeys, baboons, buffalo, warthogs (Pumba, anyone?), hippos, and birds.  The drive took most of the day.  We started with our guide at 8:30 am and finished around 2 pm.  Then there was the long drive back to Kigali.  Here are some of the best pictures of the animals. 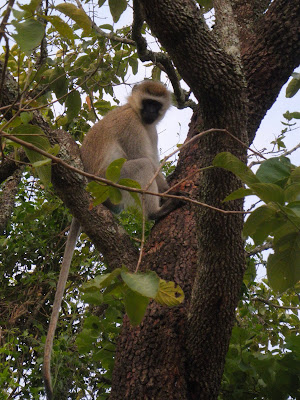 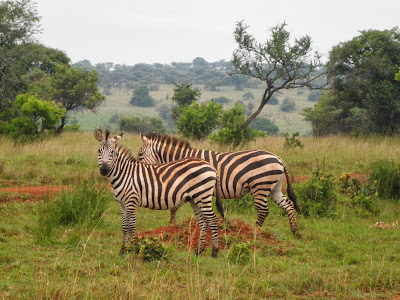 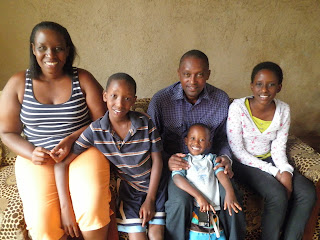 After the trip to Akagera, the rest of the time in Kigali was quite relaxed.  I read a book about the process of forgiveness and reconciliation after the genocide.  We visited the Kigali Genocide Memorial, where there is a museum about the Rwandan genocide and other genocides around the world and the mass graves of over 250,000 people.  The stories really are horrific, but almost as unbelievable as the atrocities people can commit against each other is the forgiveness people have been able to offer their family members' killers afterwards.  Other than heavy stuff, Rita and I visited the home of one of our students, Lisa, who will be in Senior 2 this upcoming year.  She's the one on the right in the family picture.  The family fed us lunch and sent us home with a small bag of peanuts.  The visit with them was very warm and I truly felt the hospitality of the Rwandans and perhaps the pride they had at welcoming people from Lisa's school, especially foreigners.  It was a treat for us and we would have visited other students, but we either didn't have their phone numbers or we had incorrect ones.  I went out to eat with Megan at a posh outdoor Asian restaurant and enjoyed some curry (expensive by Butare standards, but normal for Kigali).  I had lunch with an Emmanuel couple, Edith and Silvere, who are currently serving with Fidesco in Zambia.  I went bowling with Christine and Michael and their kids (that's the Butare American family who is in Kigali after the birth of their son).  The alley has 6 lanes with real gutters and balls, but what is so funny about the setup is the man who hides behind a curtain and removes the downed pins by hand.  I spent the night of New Year's Eve at another EC family's home.  I had met the married daughter and son-in-law and a brother at the Christmas gathering.  They had me over for refreshments on the porch, dinner, and then unexpectedly, a sleepover.  Midnight wasn't a celebratory event like it is in the States, at least not in their house, so that was a bit of a disappointment.  We did drink hot milk from their cows, though, which is a sign of being given a blessing.  The next morning, I volunteered at the Missionaries of Charity orphanage and then made my way back to Butare.  Now I'm preparing for the return of the students this weekend.  I'm sure it will be great to have them back, but since they've been gone for two months, I've gotten used to having a more flexible schedule and more free time.  Surely there will be an adjustment period, especially as I begin my full schedule of teaching!