What I've been up to during my blogging absence

I apologize for my multi-week absence.  As you will discover, my weekends have been full so I haven't had the time it takes to write a long blog entry. 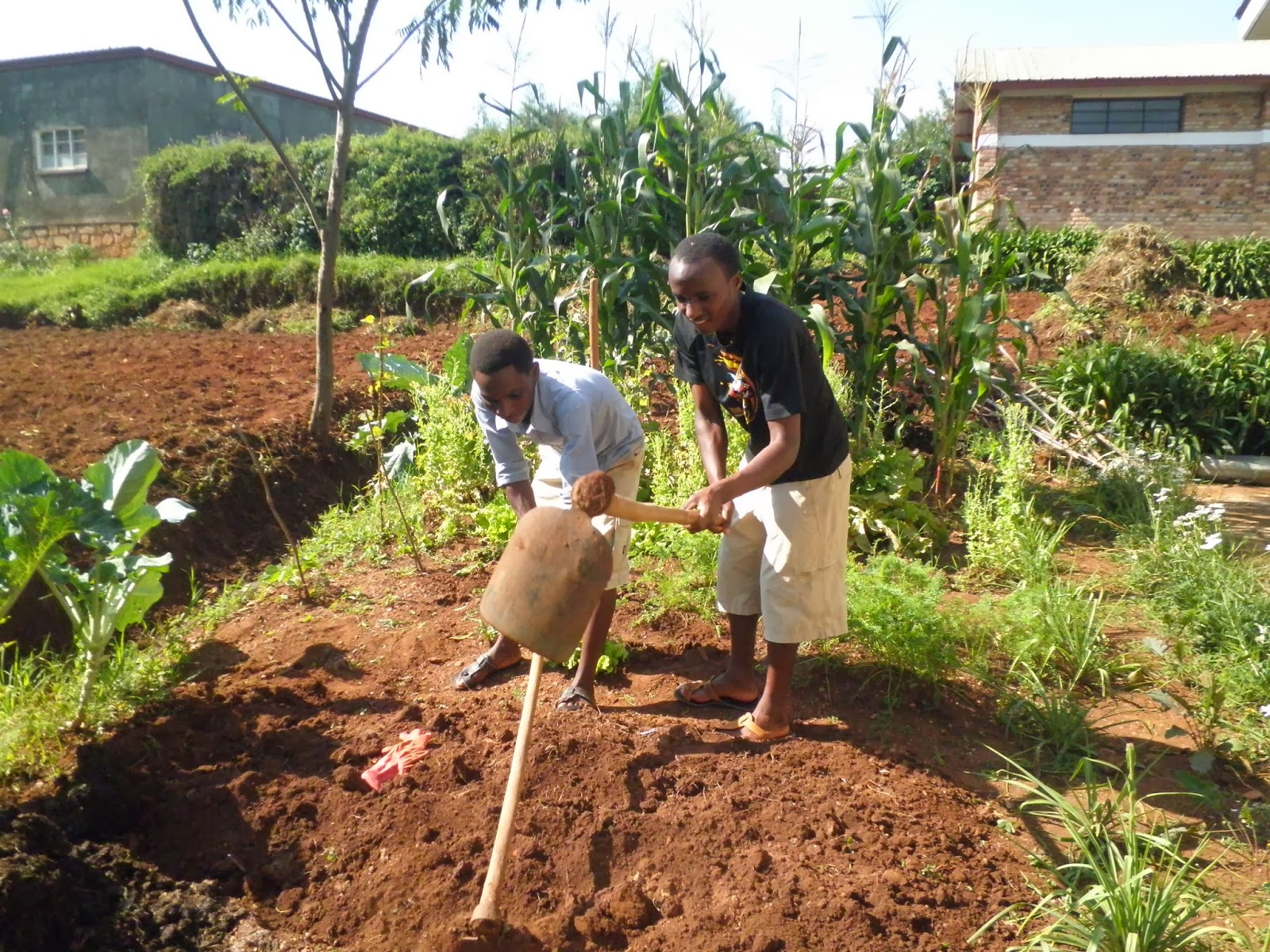 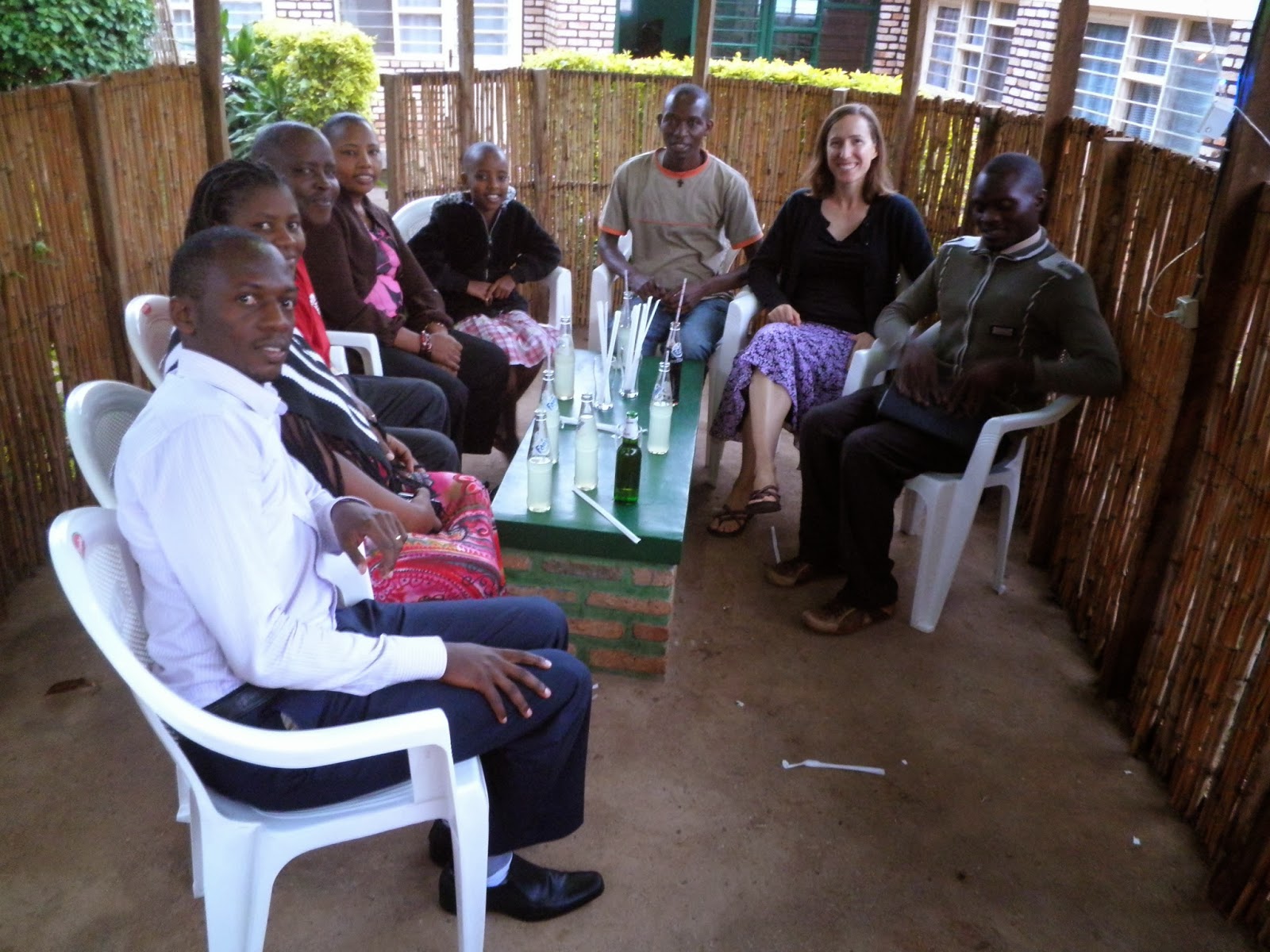 I can begin with February 1-2.  Even though now is technically called a dry season, it is the shorter, wetter dry season so I was informed that seeds have to go in the ground now, as opposed to 1- 1 1/2 months from now when the long rainy season begins.  A few brothers from my Emmanuel Cty prayer group had offered to help me in the garden and even though I am content to spend hours in the garden by myself, I took them up on the offer.  Feb. 1, Saturday, Valens and Onesphore came over in the morning to till and fertilize the soil with me in preparation for future planting.  After we finished, I invited the guys to stay for a late pumpkin pancake breakfast and they did.  The three of us and Rita sat around the table eating and talking for a few hours.  It was great.  Later that same day, I met with the other members of my EC faithsharing group for a festive dinner and time of conversation at a restaurant.  We ordered "Rwandan plates," which consist of beans, rice, green bananas, French fries, and veggies (either cabbage and carrots or green beans and carrots) and can be bought for 800 RF ($1.25).  There should be a few small pieces of meat, but they didn't bring any that day. 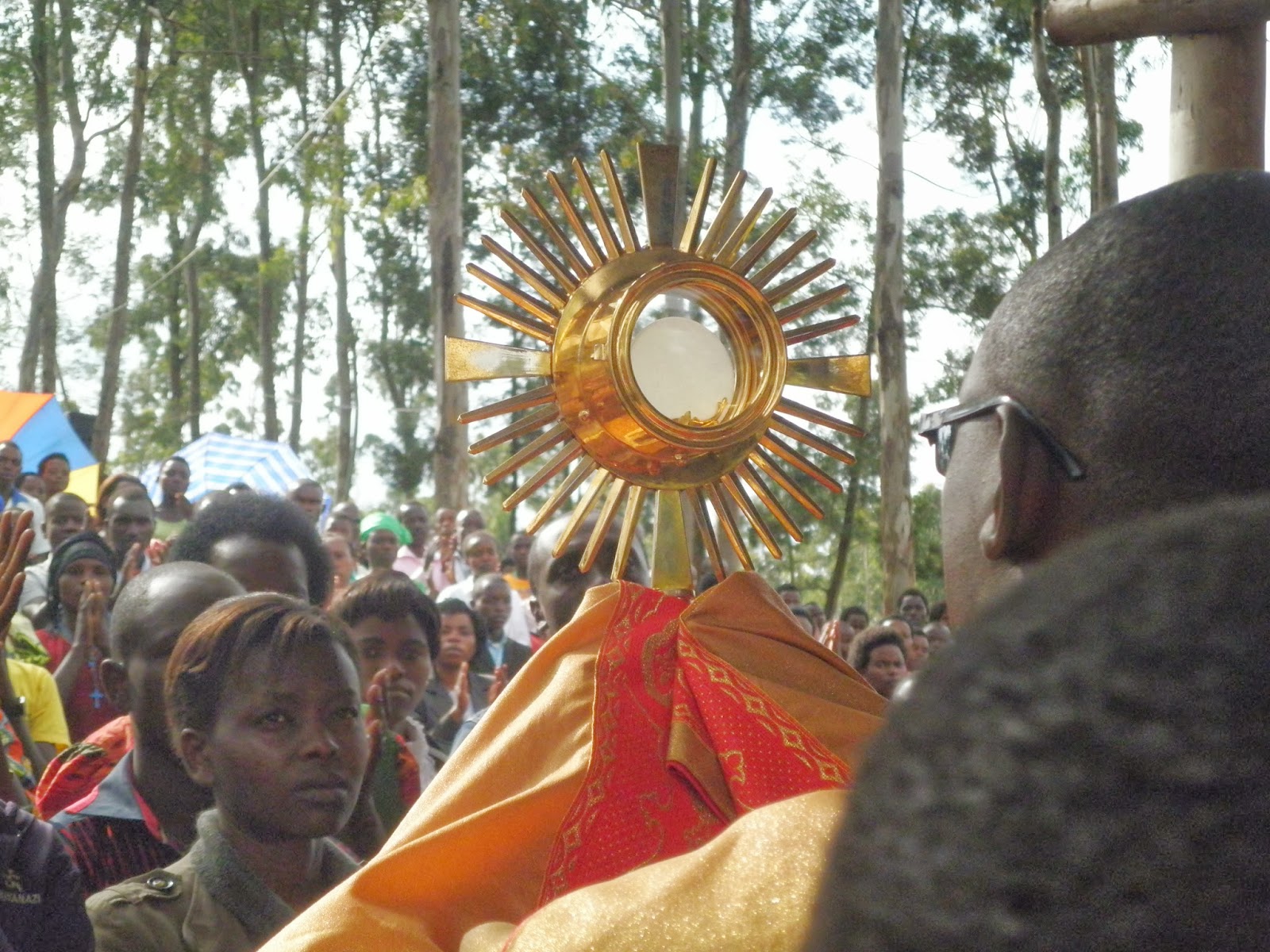 February 2 was another day to be with the Emmanuel Cty.  Once a year, each sector of the EC in the country has the responsibility of assisting at a monthly healing Mass and Eucharistic procession in Ruhango.  Ruhango is a town about an hour from Butare and is known as a center to experience the divine mercy of Jesus.  There is a big Divine Mercy Jesus statue there and once a month the people of Ruhango and around the country gather there for a big Mass to pray for healing.  On the day I went, the Butare EC group helped manage the crowds before, during, and after the Mass and procession, and man, were there crowds!  I heard an estimate of 10,000 people and I believe it.  The picture can help you picture the number of people that were there and it shows only part of the crowd.  Since I don't speak Kinyarwanda, I paired up with a guy I know named Olivier (who was really good about translating everything) and we were place as ushers in front of the choir, off to the left of the stage area.  We didn't have to do much, but we did have a good view of the altar area.  When it was time for the collection, we and many other ushers went through the crowd with plastic trash cans with holes cut in the lids for people to drop their money into.  As the only white person in a crowd of 10,000, I definitely caught people's attention.  Later, when the Eucharistic procession began, Olivier and I cleared a path in the crowd near us for the priest and his entourage to walk and we followed after him to keep the crowd back.  It was a long day (7:30-4:30), but it was rewarding. 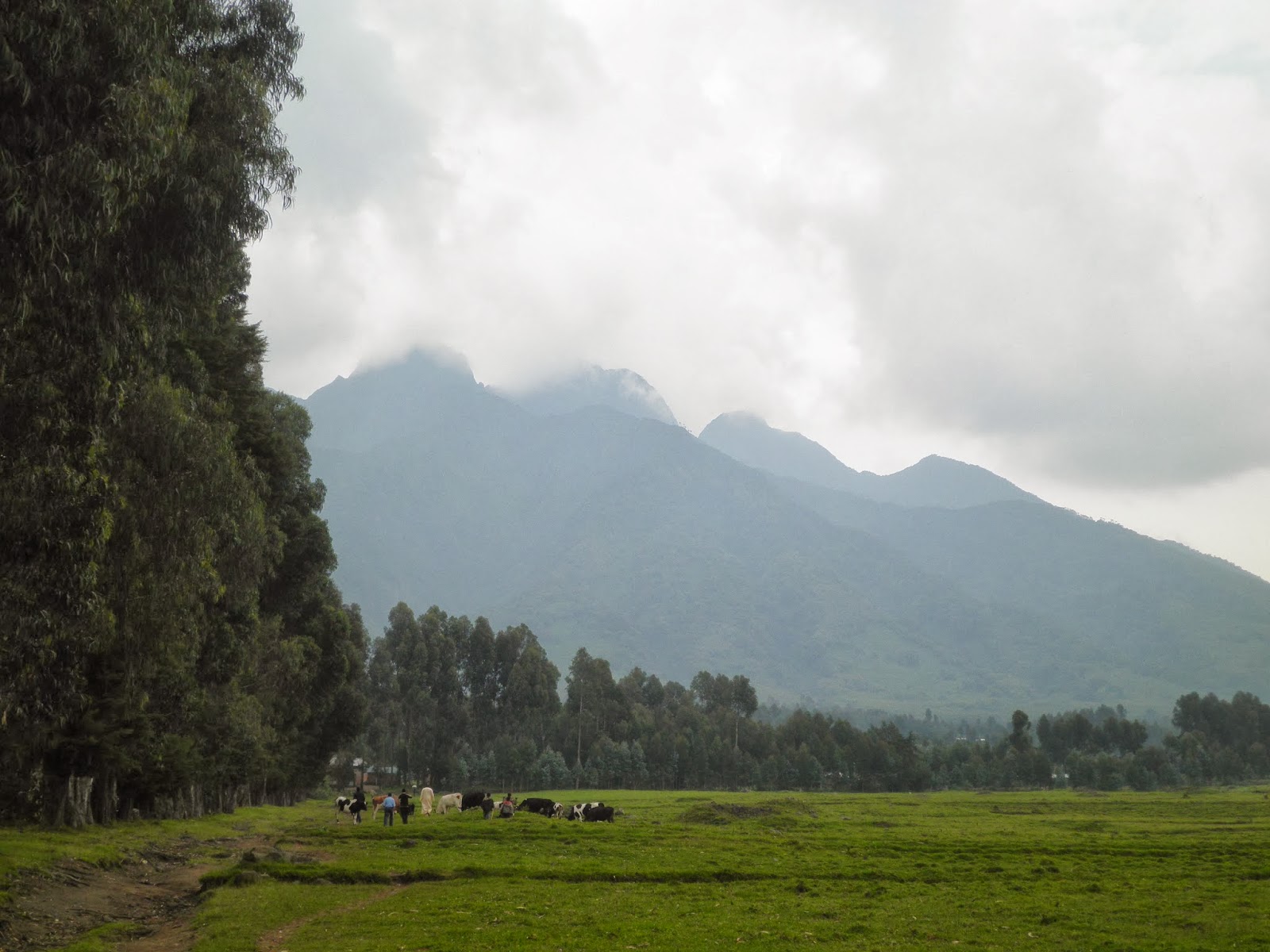 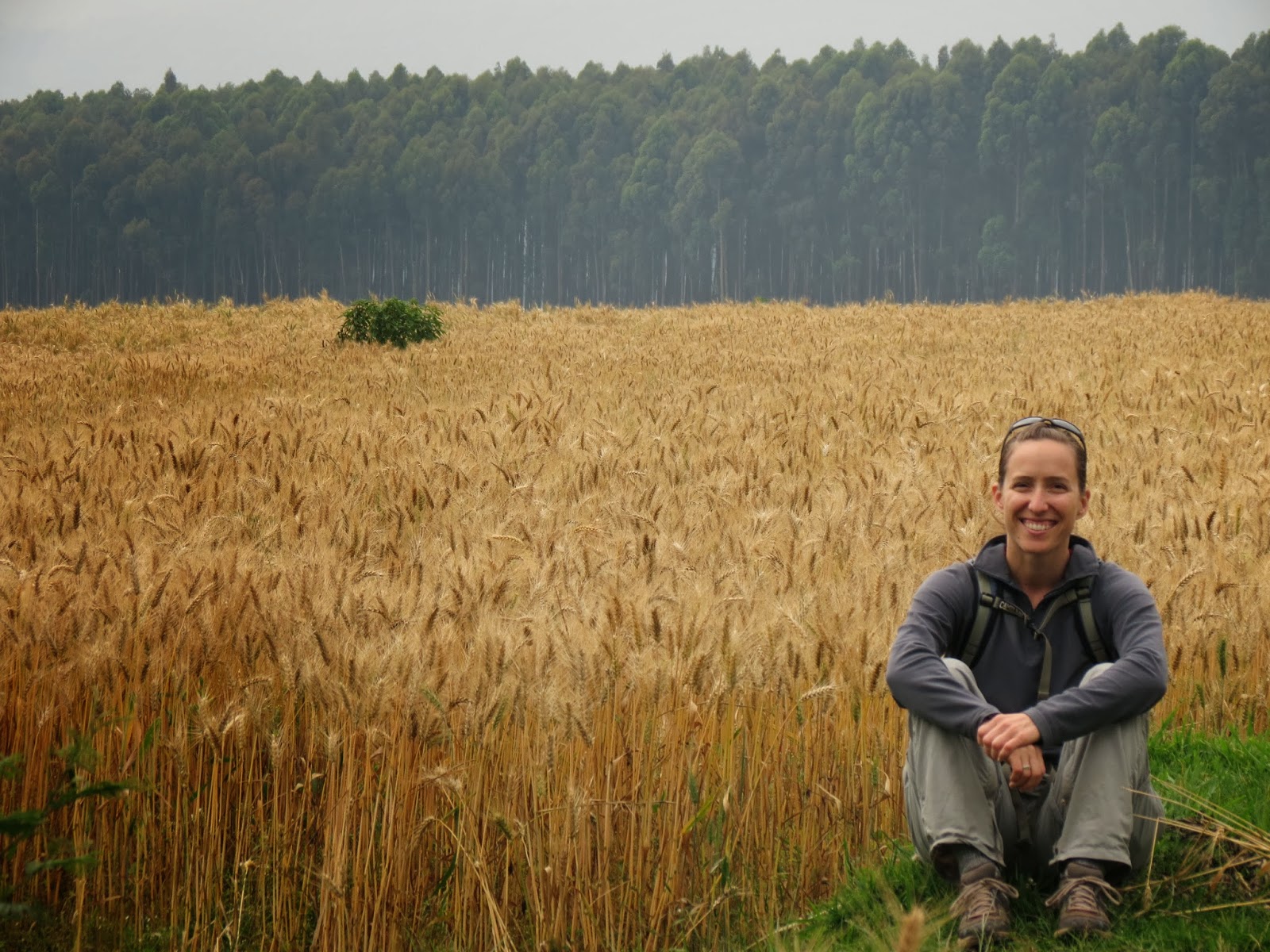 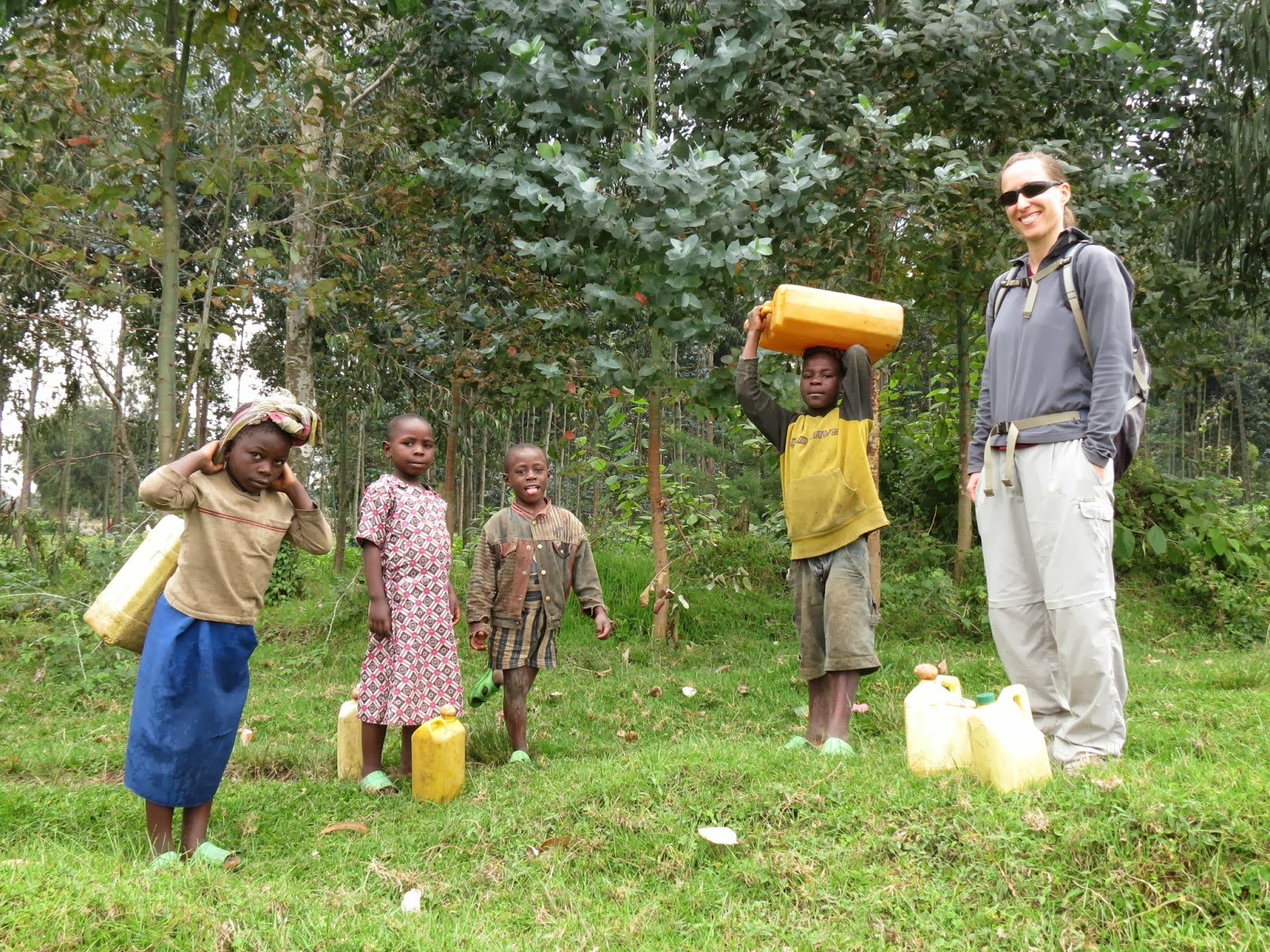 The following weekend, February 8-9, brought a trip to the northwest part of Rwanda and to the border of Volcanoes National Park.  Rita and I went with three French men: Ronan, the father of the Fidesco family in town, and Jeremie and Timothee, Fidesco volunteers in Kigali.  We planned to climb Mt. Visoke, one of the volcanoes in the park that rises from 8,000 ft to 12,000 ft.  On the best of days, the trail will be dry and not slippery.  On the worst of days, the trail will be a mud pit and super slippery.  Our group had the best of days, which was so great, but unfortunately, Rita and I weren't on the mountain with the men.  We must have eaten something bad at our house before we left (perhaps the carrots from the garden still had traces of manure on them or it was the fried eggplant that didn't taste as good as it normally does) because I was hit with the symptoms of food poisoning on the drive up to Kinigi, the village where we stayed, and they remained severe throughout the night and the next morning.  Rita started to feel iffy on Saturday morning so she stayed behind with me and proceeded to get worse throughout the day.  A test at a local clinic confirmed I was infected with e.coli.  After a restful morning, we felt good enough to walk in the surrounding countryside, which was beautiful.  Volcanic ranges were around us.  We walked in grassy fields that reminded me of Ireland and passed herds of cows and their shepherds.  We came across young children filling containers with water so I helped the smallest ones carry their containers towards their homes.  As Rita and I turned back to leave them, they called out, "Good morning, goodbye!" until we were out of sight.  We walked through a wheat field and a deaf man, who appeared to be in charge of the field, took some heads of wheat and gave them to us to eat.  So, all in all, even though we didn't get to climb the volcano, we made the best of it and took in the natural beauty of the region. 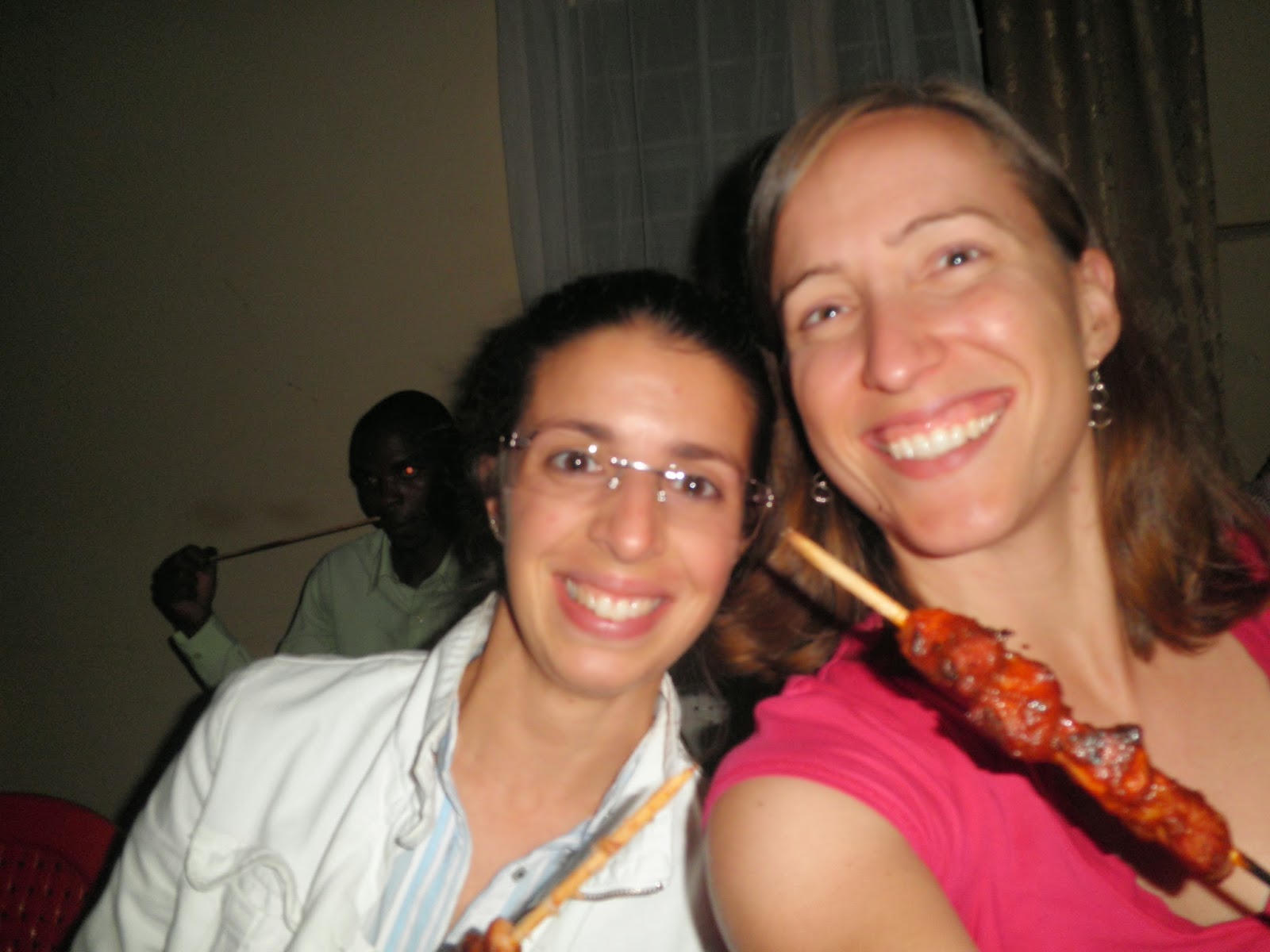 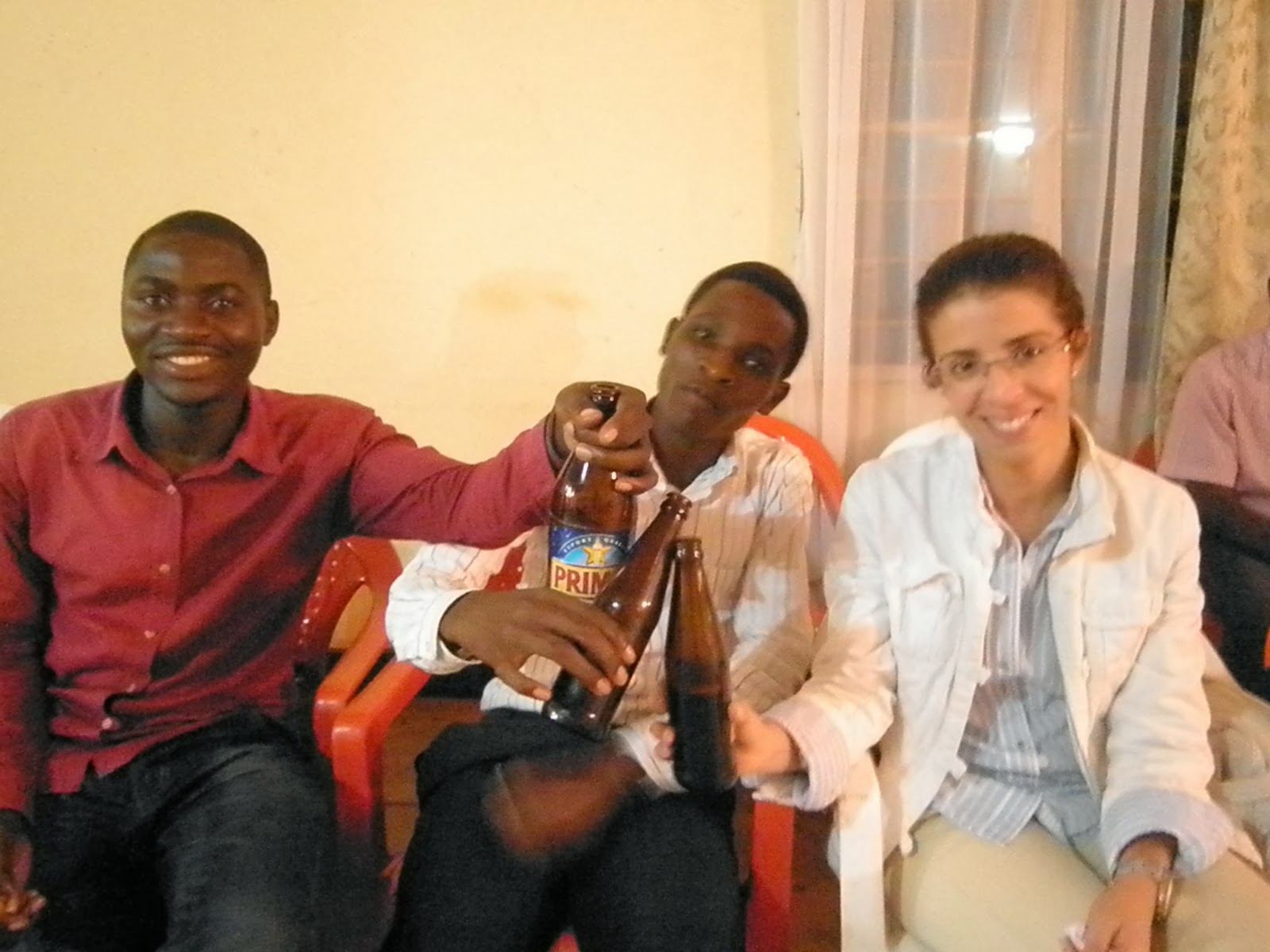 Moving to this past weekend, there was a big EC celebration for Valentine's Day and the visit of our two Fidesco brothers from Kigali, Jeremie and Timothee.  Valentine's Day doesn't seem to be a big deal in the country, but the Emmanuel Community likes to make it a day to celebrate love.  It began with a 6 pm Mass at the Butare cathedral.  During the Mass, there was a time when all the single people went forward and promised to remain faithful to the Lord while they waited for the revelation of their vocation, then the widows and widowers made a similar promise, and then the married couples went forward and renewed their wedding vows.  After the Mass, there was a dance party across the street at the diocesan welcome center.  Rita and I and everyone else sang praise songs and then danced to secular music after dinner until 11:30 pm.  We walked to the French family's home (don't worry, we were with two EC guys) to pick up Jeremie, who would be sleeping at our house.  Once we got home with him, we were hungry because one meat shish kabob for dinner doesn't cut it.  We stayed up until 1:30 am cooking and eating crepes.

Saturday was very full with celebrations of Timothee's 24th birthday and the monthly EC weekend.  After teaching two class periods in the morning, all of the Frenchies came over to our house for a late brunch.  Rita and I made pumpkin pancakes again (we had ~8 pumpkins in our garden) and enjoyed the company of the others.  Then I went to the EC weekend for the afternoon and after that ended at 6:30, I walked to a local restaurant to join the others who were having drinks to celebrate Timothee's birthday.  Afterwards we went to the French family's home for dinner, but before we ate dinner, a spontaneous dance party erupted.  Timothee played music on his laptop and soon all the furniture was pushed out of the way and Segolene and Ronan, Rita, Timothee, Jeremie, the four kids, and I started dancing in the living room.  It was great.  As we danced, I made a point to remember that moment because Segolene and Ronan and their kids will finish their Fidesco contract in one month and return to France.  Then it will just be Rita and me in Butare, Jeremie and Timothee in Kigali.  After the dance and after the kids were put to bed, we enjoyed eating cheeseburgers (yum!!!!) and talking until late at night for the second night in a row.

Sunday morning I was up early to head off to a full day with the Emmanuel Community and then work began again on Monday.  Now you can see why I haven't been able to write any updates.  Soon I would like to write about the topics of my lessons since, as a teacher, I have the great opportunity to impart wisdom to the students and that is what I try to do.
Posted by Heather Q. at 4:55 PM