I recently had my six-month anniversary of arriving in Rwanda and sometimes during the past six months, I have been frustrated because I don't feel like I have enough responsibilities at the school or that my work really matters to the administration.  Maybe it's true, maybe it's not, but that is the impression I have sometimes.  A few times this has really gotten to me, but overall I strive to remain positive and not let other people's ingratitude affect me. This may sound like a weird introduction to a post about educating the students at my school, but I include it because in the past few weeks, I feel that I am making a difference in the lives of my students.  Even if it is rarely acknowledged by the administration, even if I don't have a super crucial role to play, I am still able to contribute to the lives of the students I teach. 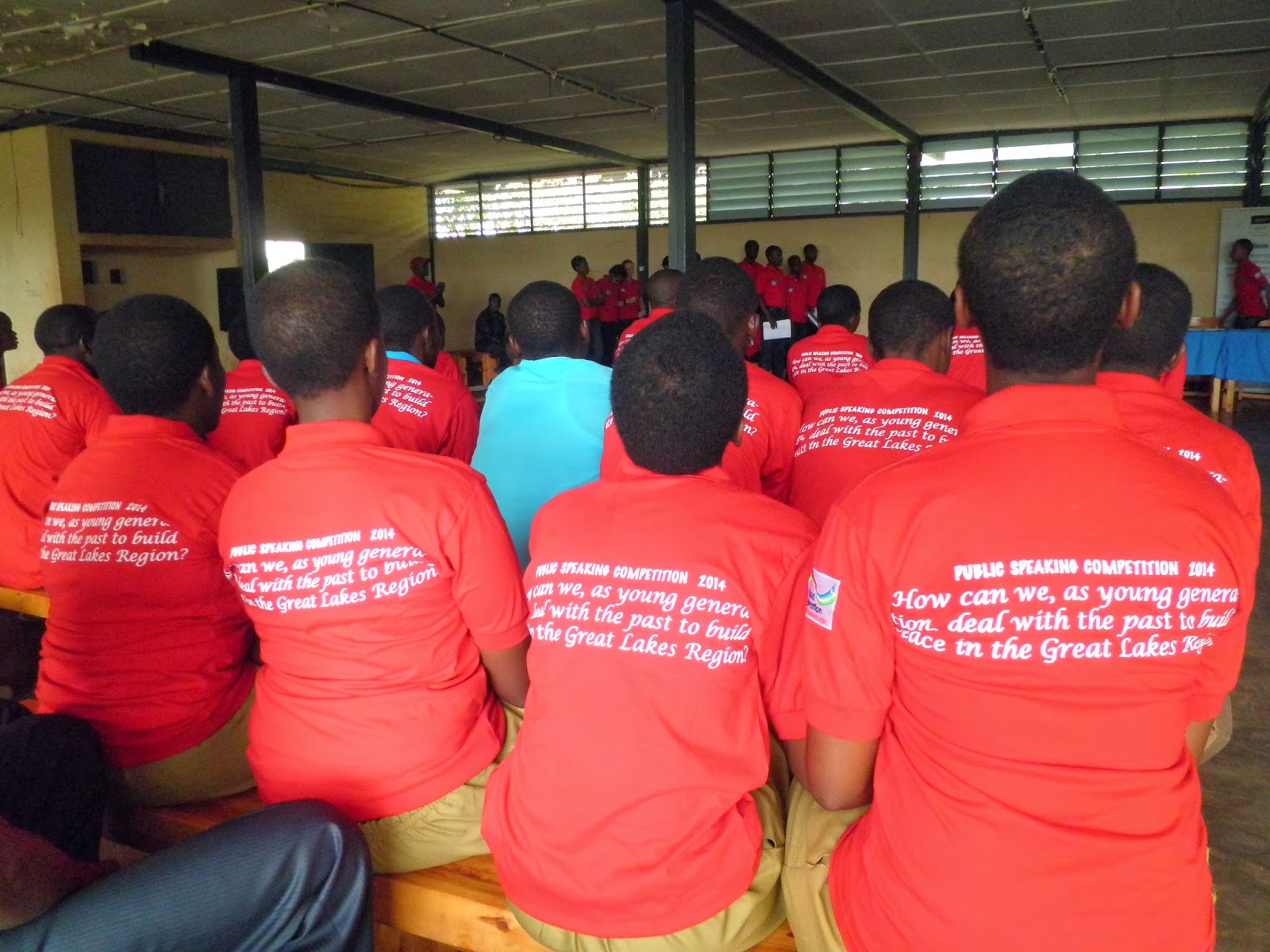 First major opportunity: coaching one of our students, Marlene, for a public-speaking competition.  The competition was organized by Never Again Rwanda, an NGO that promotes peace-building and tolerance mostly among young people, and the theme was, "How can we, as young generation [sic], deal with the past to build peace in the Great Lakes region?"  The GLR is composed of Uganda, Rwanda, Burundi, and the Democratic Republic of Congo.  My school sent four students, two who would present in French and two who would present in English, and they each had to speak for 5 minutes and then answer 3 minutes of questions.  Last week the teacher who was in charge of organizing the speakers asked me if I could work with one of the English speakers.  I wasn't thrilled by the idea because that meant more work for me (the inclination to laziness is amazing in a bad way), but I accepted the job.  I mean, Valery was already coaching three students so I could handle one.  So, from Tuesday until Sunday, I worked with Marlene.  We worked through a few drafts of her speech until it was solid.  I coached her on the appropriate amount of movement good gestures, the importance of making eye contact, and smiling.  I challenged her with possible questions that could be asked by the audience.  I recorded her practice speeches with my digital camera so she could watch herself and become her own critic.  Then the morning of the competition arrived and I sat with her as we waited for her turn to present, showered her with praise when she was finished, and consoled her when she did not take first place. 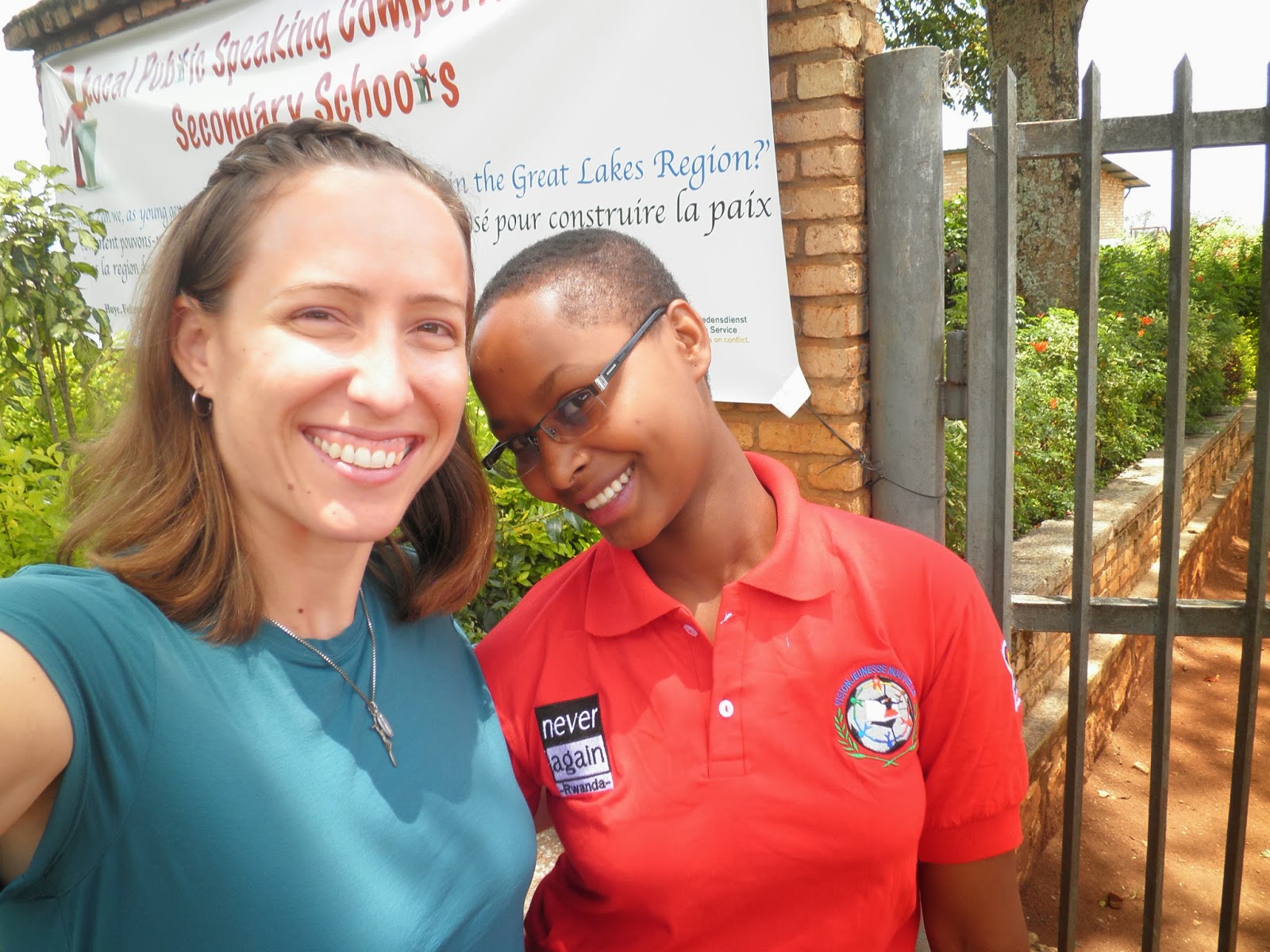 The experience was really fulfilling for me and I think for Marlene also.  Pretty much all of the activities at the school are group-oriented and the students are scheduled practically 24/7 so very rarely do I get to interact with a student one-on-one.  I try to mentor them through little discussions as we walk together from class to lunch or after the clubs end but before the study period starts, but in general I don't get enough one-on-one time with the students.  Working with Marlene gave me that opportunity.  During the study period we would squirrel away in the staff room or the library to correct the drafts and then perfect her presentation technique.  I would continually encourage her and shower her with affirmation to counteract Valery's statements that not winning equals a failure.  Since each English speaker only had a 7-8% chance of winning, I thought it was possible to be successful without winning and I told that to Marlene.  I told her that, no matter what the final result was at the competition, I was proud of her and she should be proud of herself because she gave a speech in a language that is not her own and her final presentation was 100% better than what she started with and it was true!  When she delivered her speech, she was confident, used good hand gestures, smiled, and made eye contact the entire time.  She was great!!!  This afternoon I showed her the video of her presentation and she said something that made me so proud of her.  She said something to the effect of, "I may not have won, but I feel I did the best job I could do so I have no regrets."  Amen!  That is the attitude I wanted to impart to her and whether it was my doing or not, she has the right attitude.

Second major opportunity: my class periods.  After some schedule changes, I finally ended up with nine class periods a week, one in each of the classes for Senior 4-6.  I try to mingle my lessons so sometimes I am dealing strictly with English and other times I'm imparting tools that will be helpful for life.  Some of my recent favorites have been:
Soon I will give classes on how to be happy and how to discern the will of God and make life decisions.   After the April break, I will give a long series on human sexuality, love, relationships, dating, and vocations.  Even in Rwanda, the teenagers are fascinated with relationships and love.

What's great about these topics is that they go beyond the classroom, beyond the school setting.  If they can remember what I teach, they can have the tools to battle discouragement and depression, to successfully love and be loved, to strive after the things that will bring them happiness, and to figure out what God wants from them.  These are all tools that I have learned as an adult and sometimes I wish I knew about them a lot earlier than I did.

So, these are just a few ways I have been able to contribute to the well-being and education of the youth at my school.
Posted by Heather Q. at 9:25 PM