This past weekend I went to an ordination in Kizuguro, a town in the Eastern province.  I didn't know the man who would be ordained a priest or the two men who would be ordained deacons, but they are in the same religious community as the novices I teach so my roommate and I were invited to attend.  It also happened to be the hometown of Fr. Andre, one of the priests from across the street, so he was happy to be able to show us his old stomping grounds.

It was fun to be in Kizuguro with the novices and other members of the congregation (the Missionaries of the Sacred Hearts of Jesus and Mary) that I had met during the year.  It felt like a family vacation because the Butare men of the MSHJM have become my spiritual brothers.  Rita and I were also blessed to be hosted by the sister congregation in Kayonza (if you wonder why I'm bothering to include town names when you don't know Rwanda, it's so I have a record for myself).  At the sisters' home, there were three little puppies and a fierce momma who kept me away from them most of the time.  There were also monkeys and one morning I even held out an open banana and one of the monkeys ran up and grabbed it from my hand.  That was cool!  There were three Spaniards staying with the sisters and the two congregations originated in Spain so I got to practice my now very-poor Spanish all weekend.

But the focus of this post isn't on the ordination or the surroundings.  It's on Pisuri (pronounced Pee-sur-ee), a little kid that came right up to Rita and I and gave us hugs as we walked onto the parish grounds the first afternoon.  I remember being surprised by how direct he was.  Sometimes children will grab my hand after I have interacted with them a bit, but he came right up, gave me a hug, and then grabbed Rita and my hands.  I was amused when he made a game out of playing with Rita's roller suitcase as we stood outside talking with others.  Then, when Rita, Fr. Andre, and I sat down inside the refectory for a pre-dinner snack, Pisuri enjoyed eating bread and drinking an orange Fanta as he shared a chair with Rita.  Based on the reaction of the workers in the building, I could tell it was not normal for him to join us for our snack and eventually the parish priest kindly chased him out of the room. 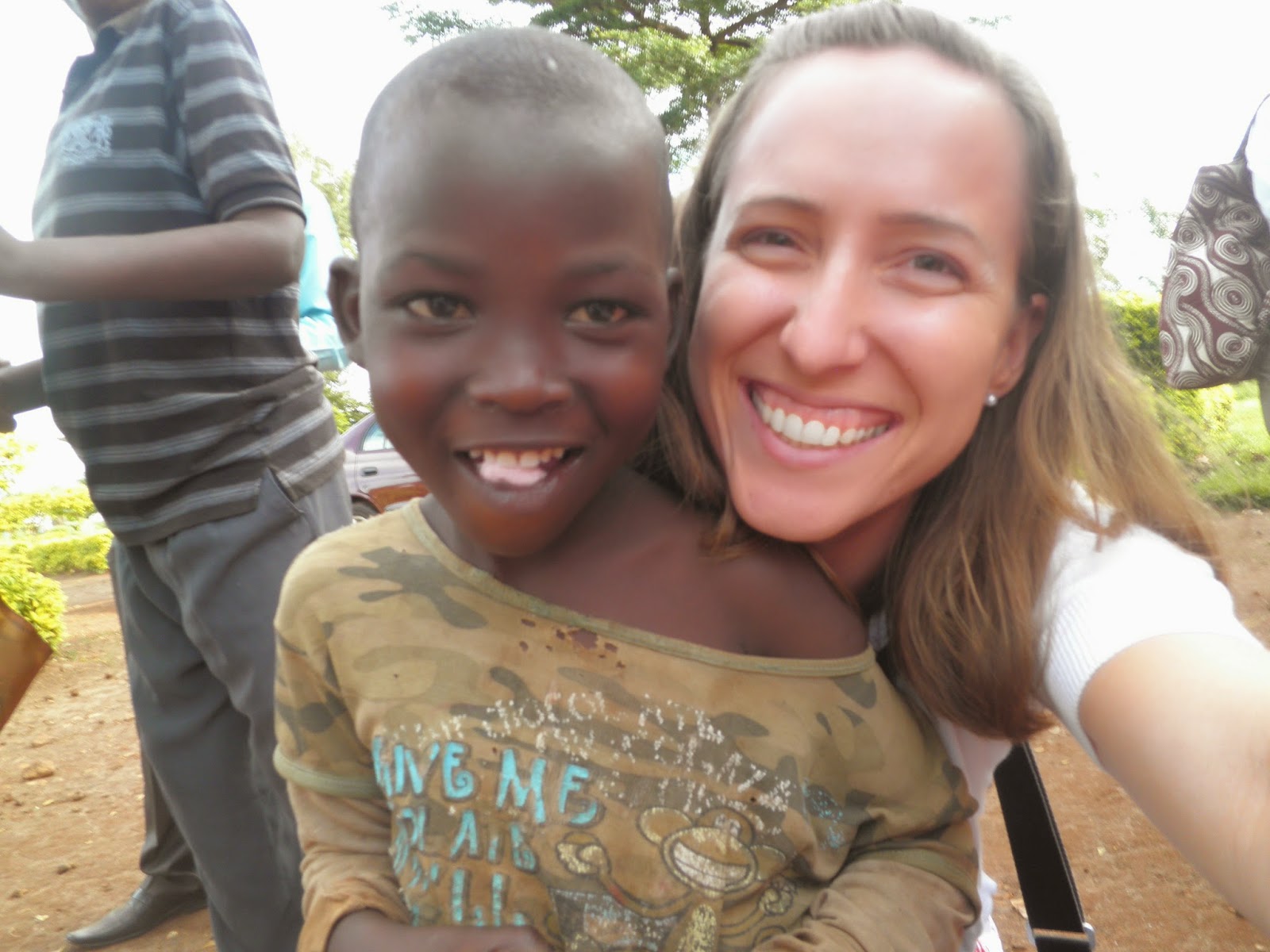 I could tell by the dirt on his clothes and skin, as well as the absence of an adult keeping tabs on him, that Pisuri didn't have an ordinary, secure childhood.  I later discovered that his mom lives somewhere in or near the village, but she is crazy.  I never heard a dad mentioned.  Since the mother is both crazy and poor, her children (I'm sure if there are more besides Pisuri) fend for themselves.  The priests and seminarians at the parish keep an eye on him and offer him a bed in the welcome center, but they said he never spends the entire night in the bed.  He slips out before the morning.  The village people also know him, which I saw when Fr. Andre, Rita, Pisuri, and I went for an evening walk the first night.  The people called out to him, "Ay, Pisuri!", as we walked by.  Essentially he is a street boy who is well known around the village.  Since he isn't super thin, I assume some people must give him food to eat.

Pisuri and his situation captured and broke my heart.  It also made me reflect on what could be an American desire to "save the world."  I'm not sure on that last one, but I wanted to write about my thoughts to get people's feedback.  But I'll come back to that.  First, the capturing of my heart.  As the four of us went walking on Friday night, Pisuri held my hand and often tried to pull my arm off in an attempt to move me somewhere or just be a pill.  I'm not sure.  Since he kept yanking on my arm, I eventually scooped him up (he's about 5 years old) into my arms.  He definitely enjoyed being held and again surprised me by putting his cheek right up against mine.  The Rwandan children are touchy, but he was so much more so.  I held him as we walked back to the church and stood in the courtyard talking with the men who would be ordained the next day.

That's when the parish priest explained Pisuri's home situation and how he is starved of affection.  That's why he came right up to us to hold our hands.  That's why he wanted to be held or to sit in my lap whenever I sat down.  So, since he is starved for affection, I decided to do what I could to satiate his hunger and I kept holding him, even after one of the priests said that I should put him down because it would only be harder to put him down later.  It didn't make sense to me to put a child down who doesn't get held at home and is desperate for it when my arms are capable of holding him.  So I held him, probably for close to an hour, and he snuggled his face into my neck and started the slow breathing of someone who is asleep or close to it.  When the parish priest told Pisuri that I would see him the next day, he said, "No.  I'm going to sleep with her."  Man, talk about a difficult situation.  I was willing.  Let me take that child home and bathe him and lay him in bed next to me so he can feel love and security for one night.  I was willing.  But no one thought it was a good idea and I too wasn't sure if Pisuri would stay in my room all night or if he would try to sneak out.  Since I was staying with the sisters 30 minutes away, I didn't want him sneaking out into an unfamiliar place.  So I didn't take him and when the time came for someone to pull him away from him (he wouldn't let go), he screamed bloody murder.  It was terrible to hear.

What made it harder was a comment that I was responsible for his reaction because I hadn't put him down earlier.  When I responded that I was only trying to make up for his lack of affection, the response was that I wasn't going to adopt him so why make it hard on him to be taken away.  I was shocked and confused by the comments.  Why was it seen as a bad thing to hold a kid who has a crazy mother and is left on his own as a five-year-old?  Was I incorrect in thinking that I could make a difference in his life, even if it was only for a weekend?  Also, why did no one else seem to care as much for him or to be heartbroken over his situation?  I wanted to do something, to find him a home, to challenge the priests to find a woman who could adopt him.  Heck, if I lived in Kizuguro, I would take him into my home and see how it goes.  If I were married and international adoptions were allowed, I would investigate that route too.  Why did no one seem to care as much?

That's when I started to wonder if Americans have a Messiah complex, the need or desire to save the world.  Saying it like makes it sound like I think that is a bad thing, but it's not.  Think about these facts.  Catherine, an Australian woman in Butare, once asked me and an American couple if Americans are generous people.  I didn't know how to answer the question because I've never noticed the generosity level of other cultures and compared it to my own, but Catherine went on to say that all the Americans she has met in Rwanda are really generous, more so than she is used to seeing I guess.  My roommate, on hearing Catherine's statement, said she could see some truth to it because she knows or has heard of many Americans who go on service trips to other countries or take service years.  Then I think about adoptions.  I know plenty of American families who have adopted, either because they weren't able to conceive or even after they had biological children, but I haven't heard any stories of adoption from my foreign friends in the Emmanuel Community, for example.  The United States also gives tons of foreign aid to developing countries.  Tons of projects in Rwanda were and are funded by USAID, the United States Agency for International Development.  And then there is our history of going to war when our own country wasn't under attack.  I'm not saying it's right or it's wrong that we go to war, and I know some people will say we only go to war when we have a selfish reason to do so (oil), but I choose to believe that sometimes we have risked our own soldiers' lives and used our own resources to improve the situation of people in other countries.

So, the questions I leave with you are, "Do Americans have a greater desire than other countries to rescue people from their difficult lives in other countries?  Do we feel this need to make things better for the less fortunate?  Do we think we can make the world a better place and put our efforts into doing so?  Lastly, if we have these ideas, is it a bad thing?"
Posted by Heather Q. at 11:35 PM