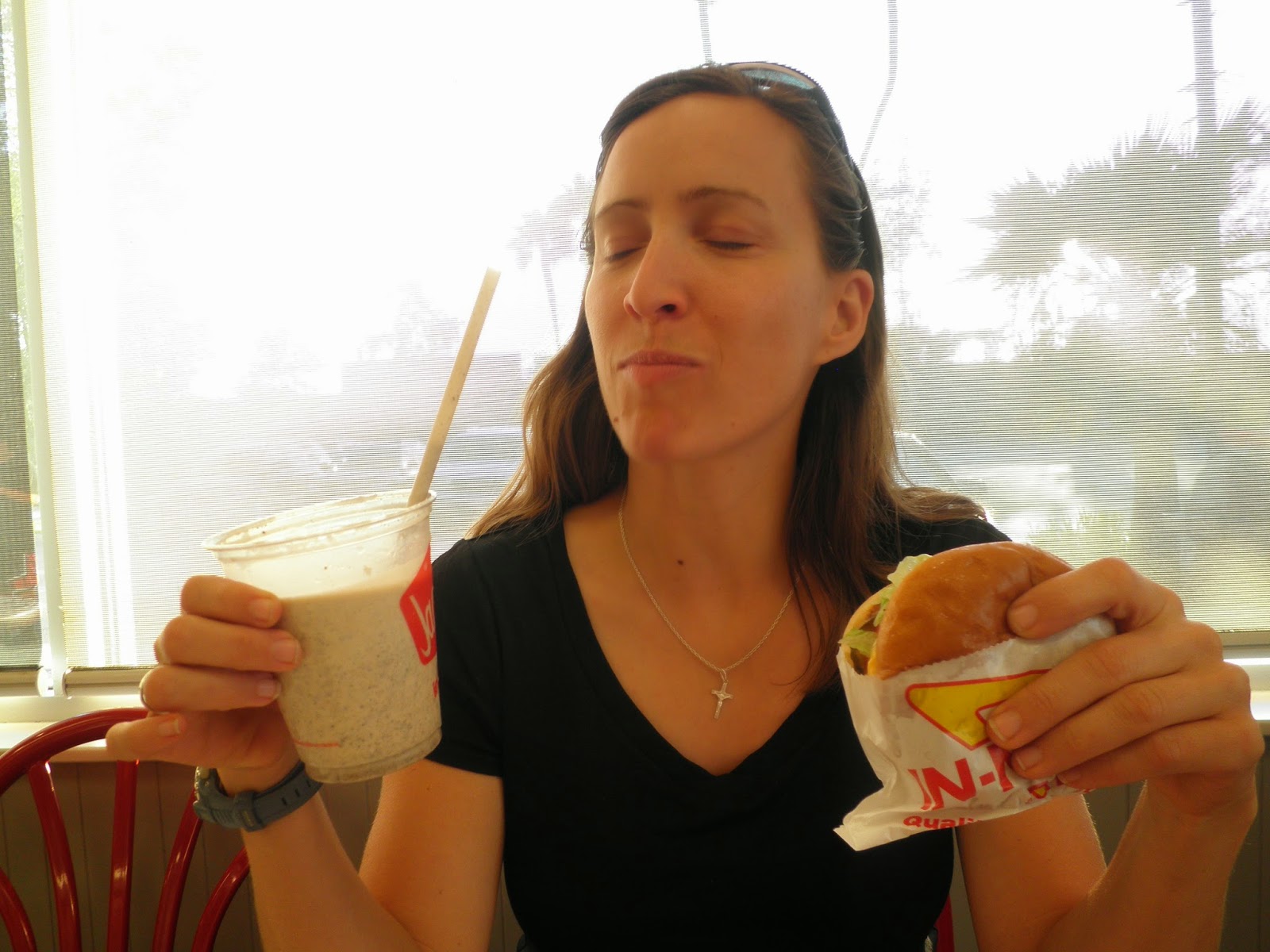 The end has come and gone.  Last night I arrived in southern California after thirty hours of travel, six movies, two plane meals and lots of snacks, and a brief visit with my cousin, Michelle, and her kids at the Seattle airport.  The first thing I did once I arrived after thanking God for safe travel?  Get an Orea milkshake from Jack-in-the-Box and a cheeseburger, animal-style, from In-n-Out Burger.  Yum!

So far I don't feel very different.  It feels like I'm home for a normal visit, except for the fact that there are lots of details to take care of that aren't normally there, like find a cell phone and health insurance plan, research used cars in Minnesota, and find housing for three weeks from now in Minnesota.  Yeah, no big deal. 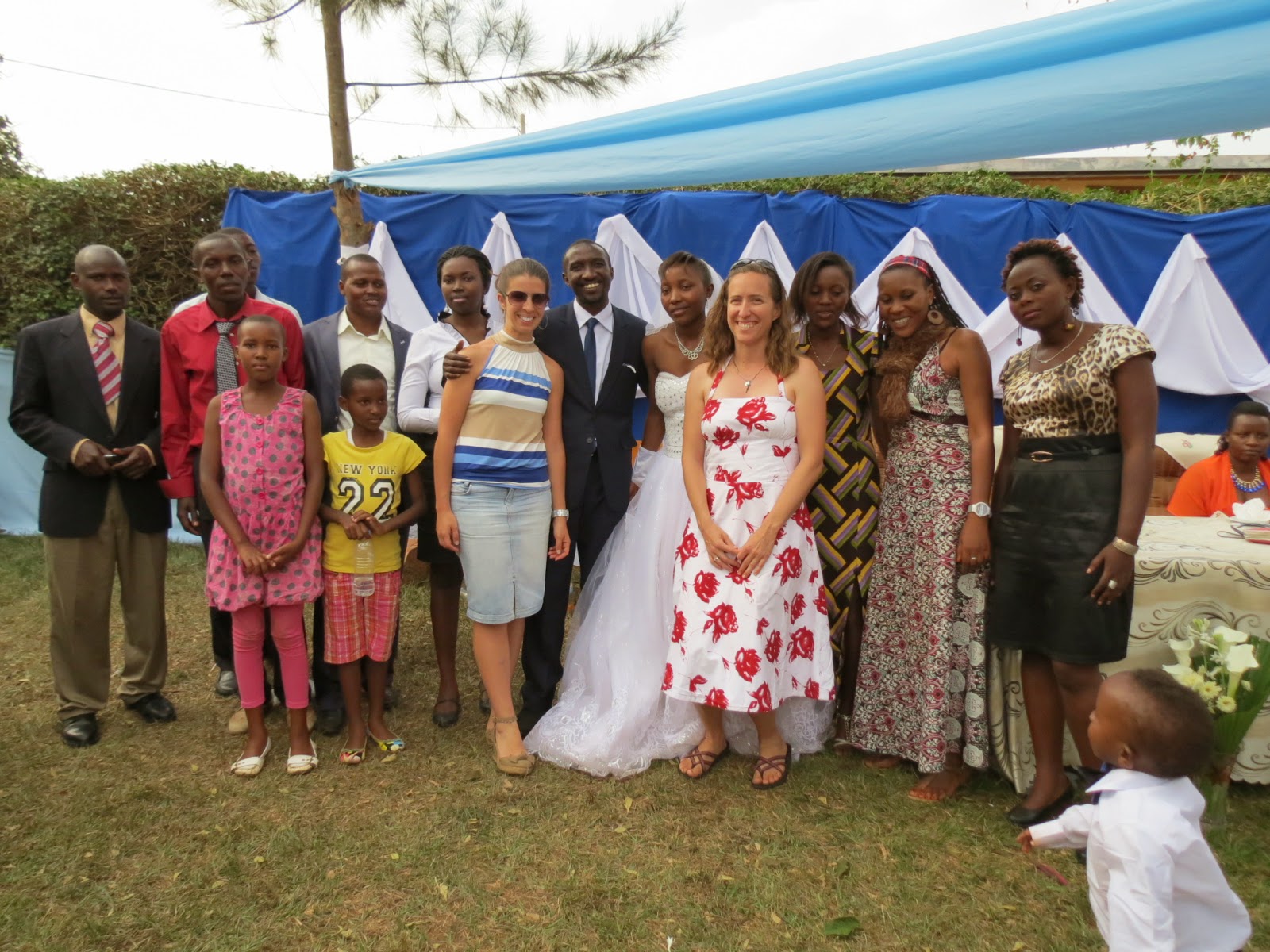 I was able to do all sorts of cool things and had to do one big uncool thing in the weeks before I left.  After the camping trip, Rita and I traveled to Kigali for a wedding of a man who volunteers with the Brazilian congregation.  That meant we spent a lot of time hanging out with each other and with the Brazilians.

Once we got back home, I was surprised by the news that I was responsible for giving the final exam to eight of my nine classes because my partner teacher was out after giving birth.  This was a shocker to me because I hadn't given final exams in the previous two terms and when I learned of the news, it was already halfway through final exams and only two weeks before I would leave Rwanda.  Well, that definitely changed my plans of how I would spend my last two weeks.  I had hoped to spend a lot of time hanging out with the students once their exams finished (they have a gap week where they are at school waiting for their grades), but instead my roommate and I spent hours and hours, days and days, grading almost 300 exams.  It was insane and my grades were turned in two days late, but we finally finished them and I could have a day or two to hang out with the students. 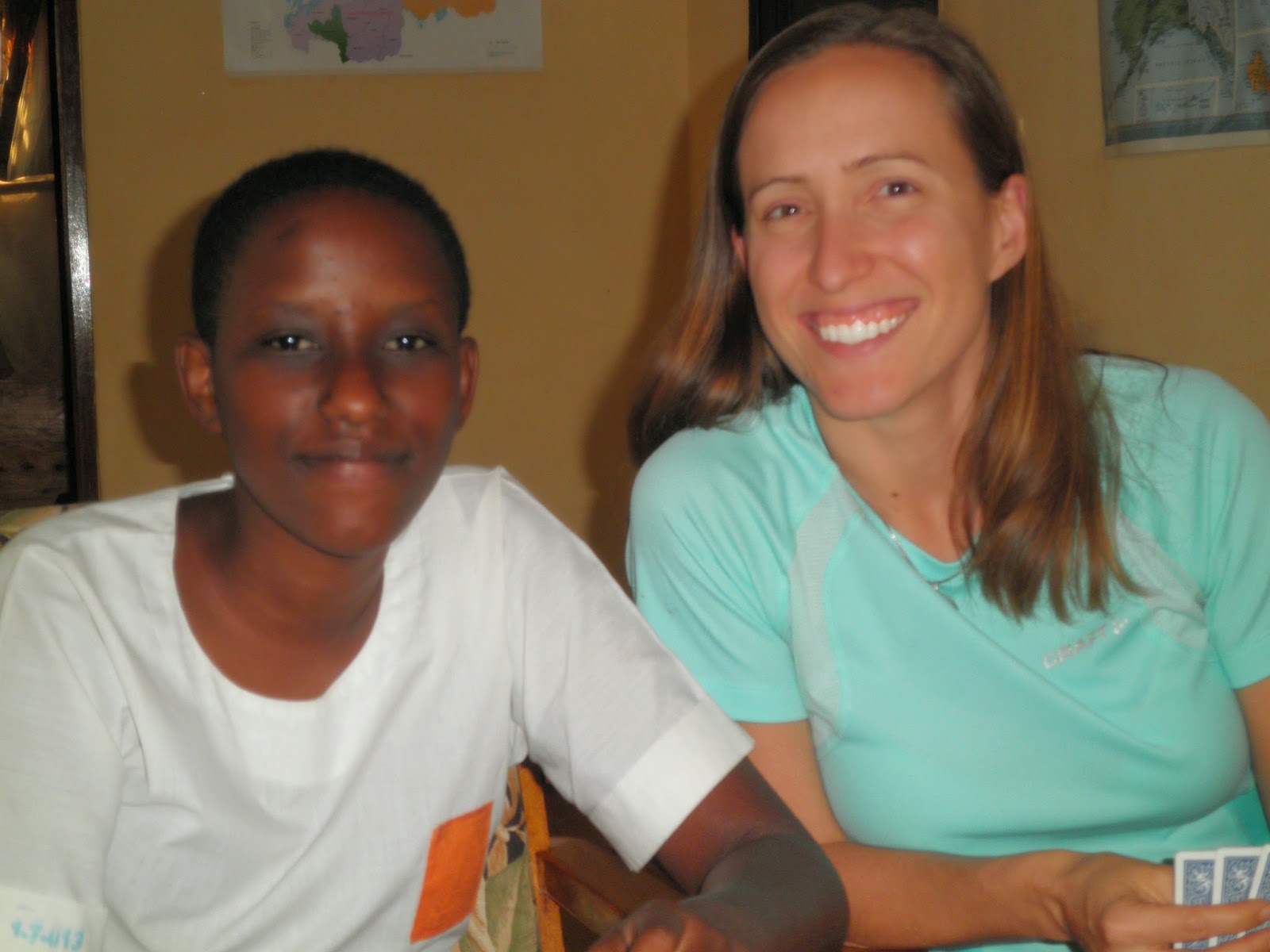 Two unexpected opportunities for hanging out came about when one of the Senior 2 students, Lisa, said that the headmistress gave her permission to visit us in our house.  This surprised me because our house is normally off-limits, but we were happy to have Lisa over.  We played cards and then we went into the kitchen and I taught her how to make the dough for pie crust (we would be having quiche later that night).  You should have heard her as she urged me to wait for her return before proceeding with the next steps since she had to leave for a school assembly.  I had to continue making the quiche without her, but she later joined us and the family of the local EC coordinator for dinner. 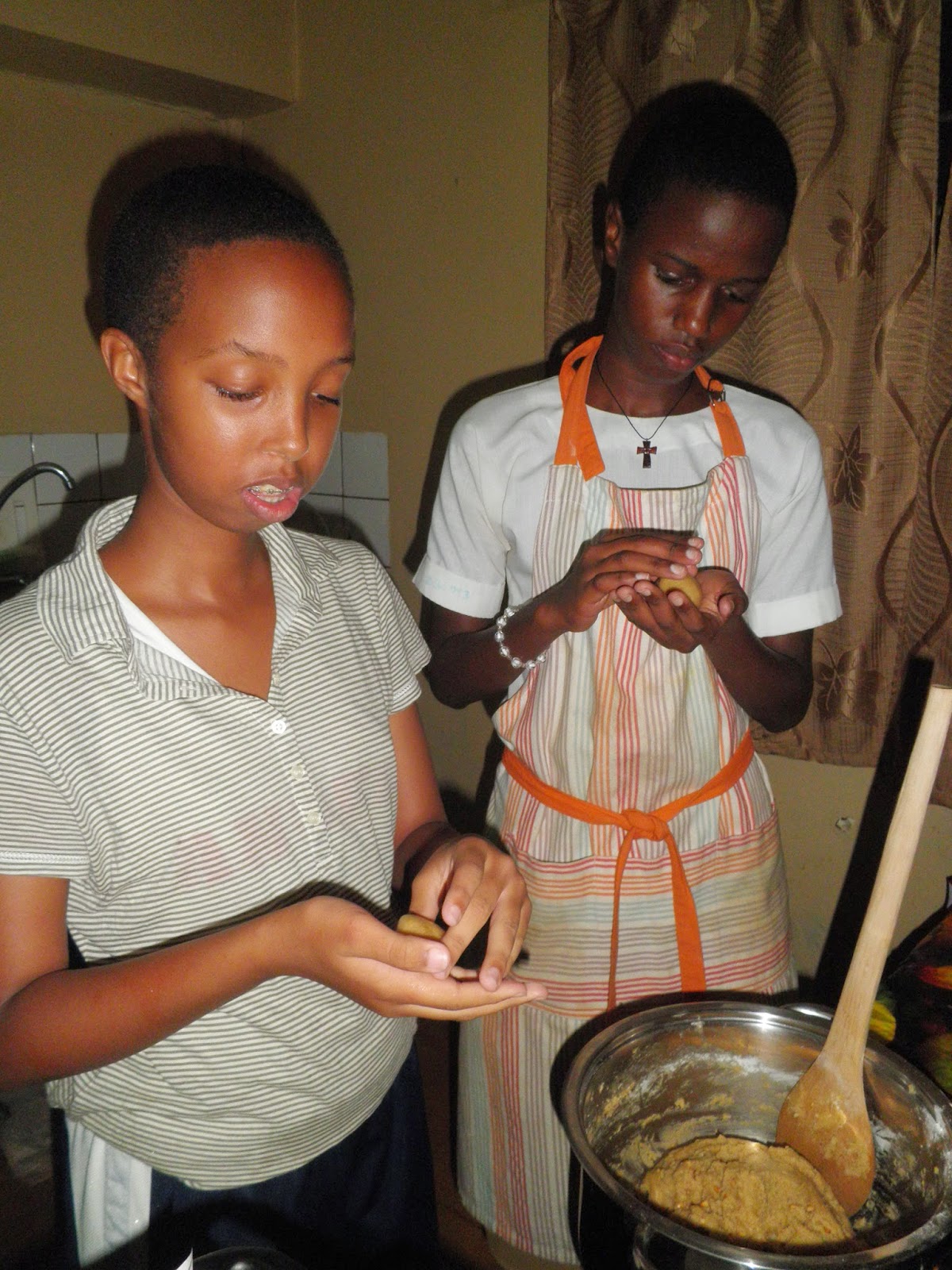 The other opportunity was another cooking experience.  Now that Rita and I knew the students were allowed to visit us, we invited two of our other favorites, Laurette and Gerardine, to bake peanut butter cookies and a sweet potato pie with us.  It was a new experience for them in many ways: American measurements, peanut butter tasting, and cooking in our kitchen.  Cooking with the students was something I had hoped to do in Rwanda and once I saw how the school was structured, I didn't think it would be possible.  I'm happy it happened right at the end. 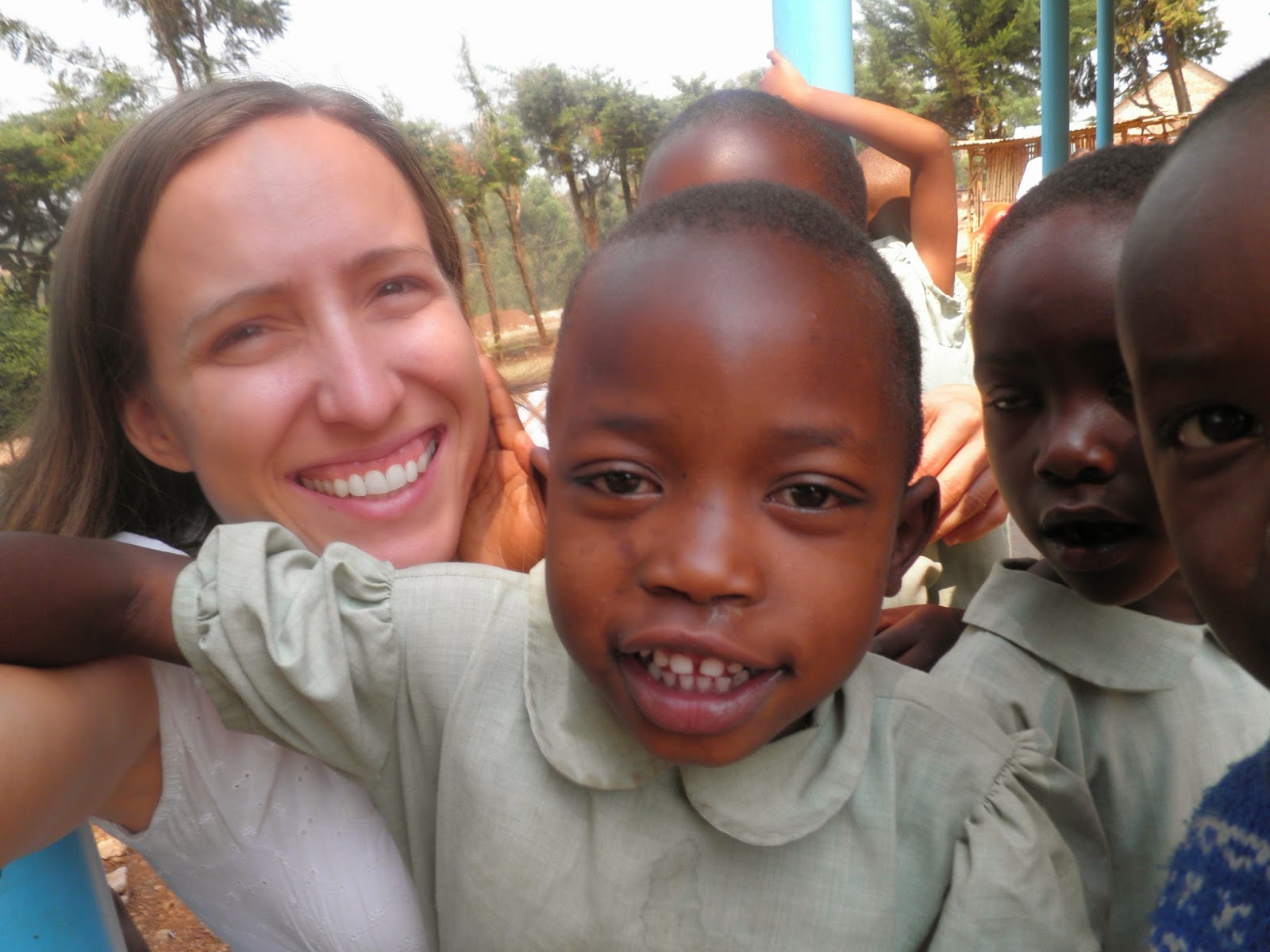 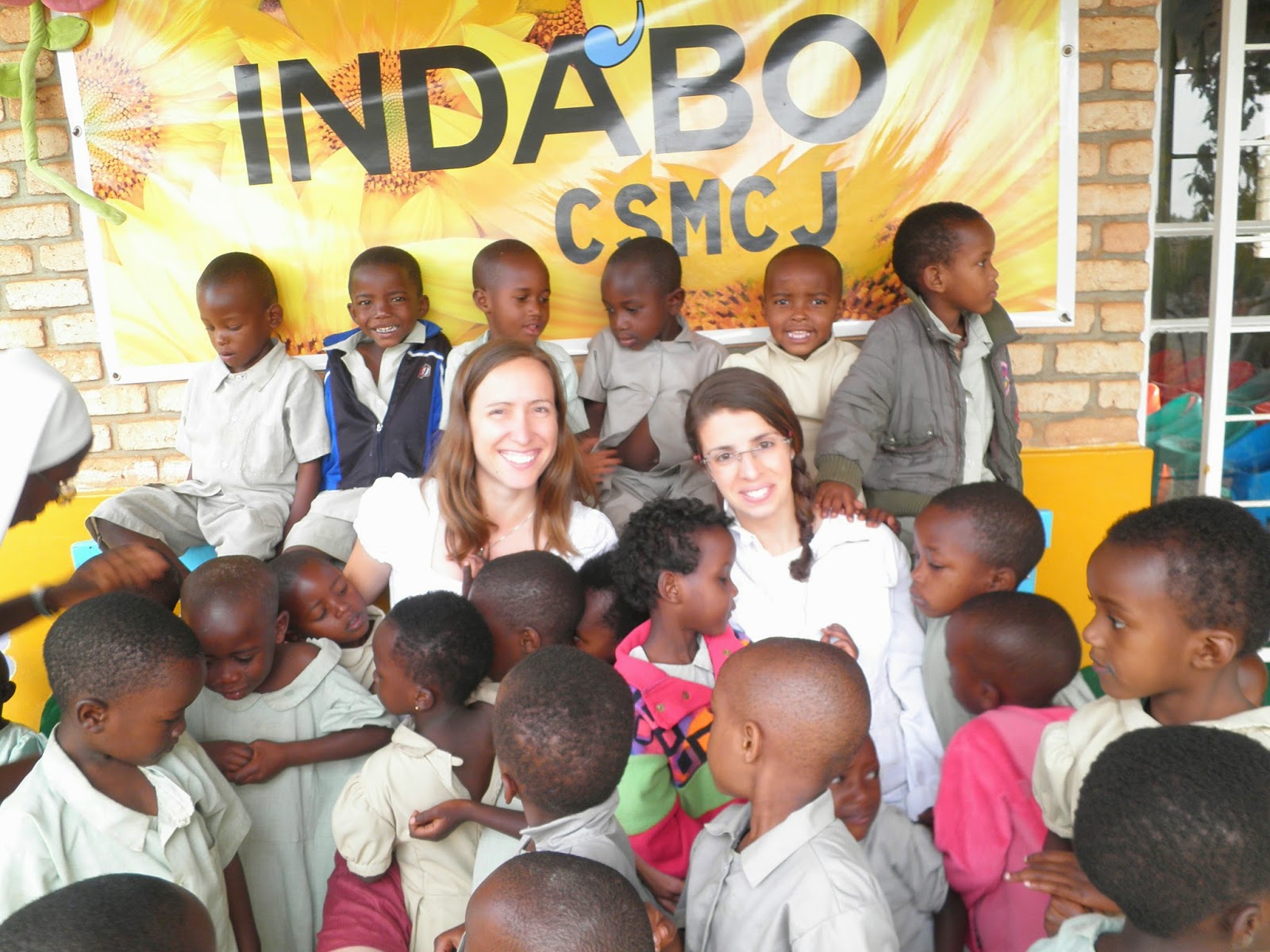 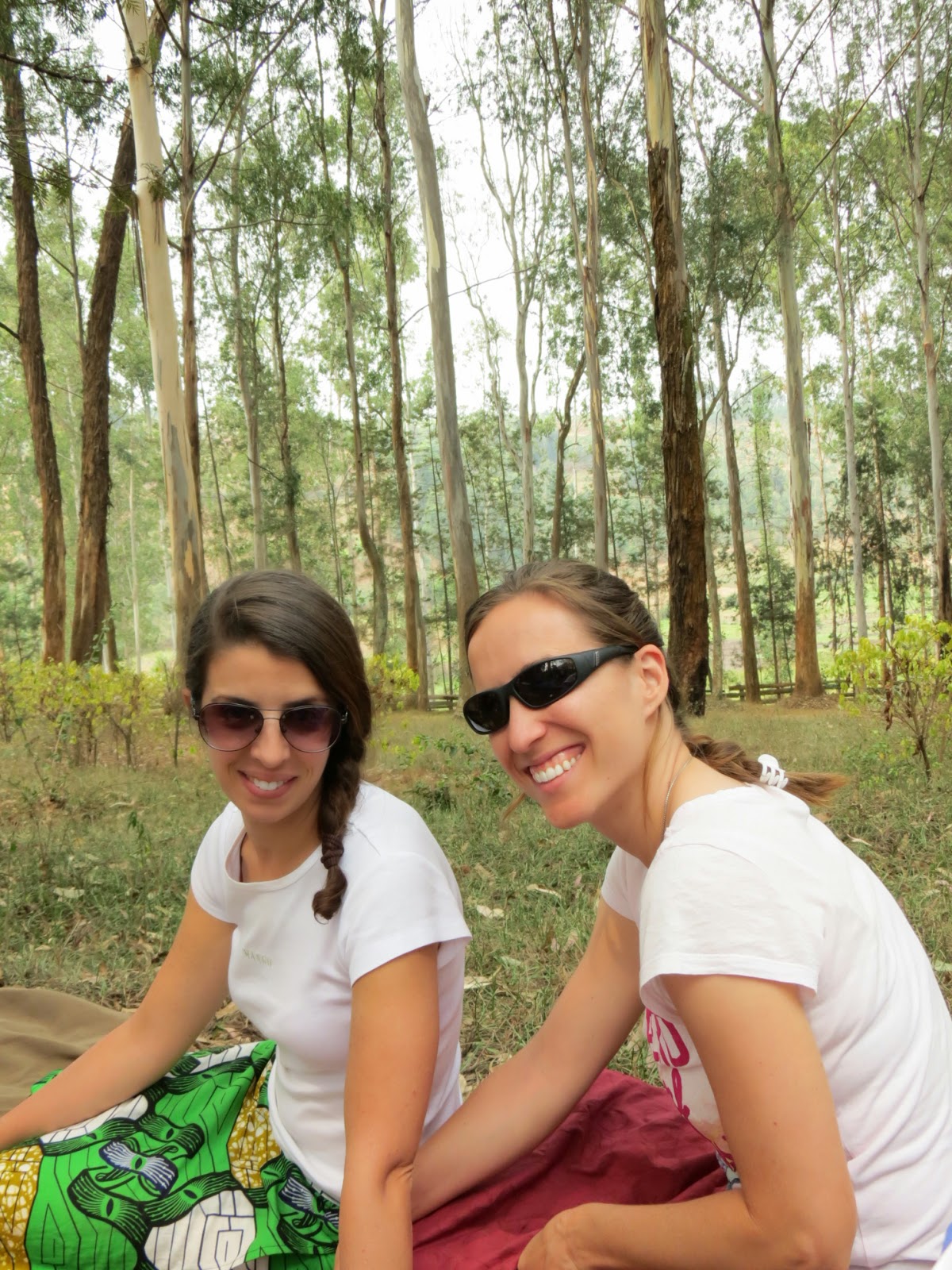 Last Thursday was Rita's birthday, which provided lots of opportunities for fun.  We went to the Brazilian daycare for my last time.  The kids sang Happy Birthday to Rita and then swarmed both of us.  They were so used to having an umuzungu of their own when the Americans were in town that they seemed to be needier for us than ever.  Today I was looking at some pictures of the daycare from when the Americans were in town and just looking at photos of the kids warms my heart.  Fr. Dave said someone told him that "Rwanda is the land of a thousand smiles because it is the land of a thousand tears."  That person was playing off the motto of the country, which is "Land of a Thousand Hills."  I don't know if there are more smiles because of the tears of the past, but there sure are a lot of smiles, especially from the beautiful Rwandan children.  After the daycare, we went to the Benedictine monastery with the Brazilians for a picnic, volleyball, and Uno and then went to the student Mass where I could say goodbye afterwards.  At night we went over to the novices, who threw a birthday for Rita and going-away for me party.  I was so touched when they presented gifts for us, which included personalized baskets with lids for each of us and a large, round banana leaf nature scene that was also personalized. 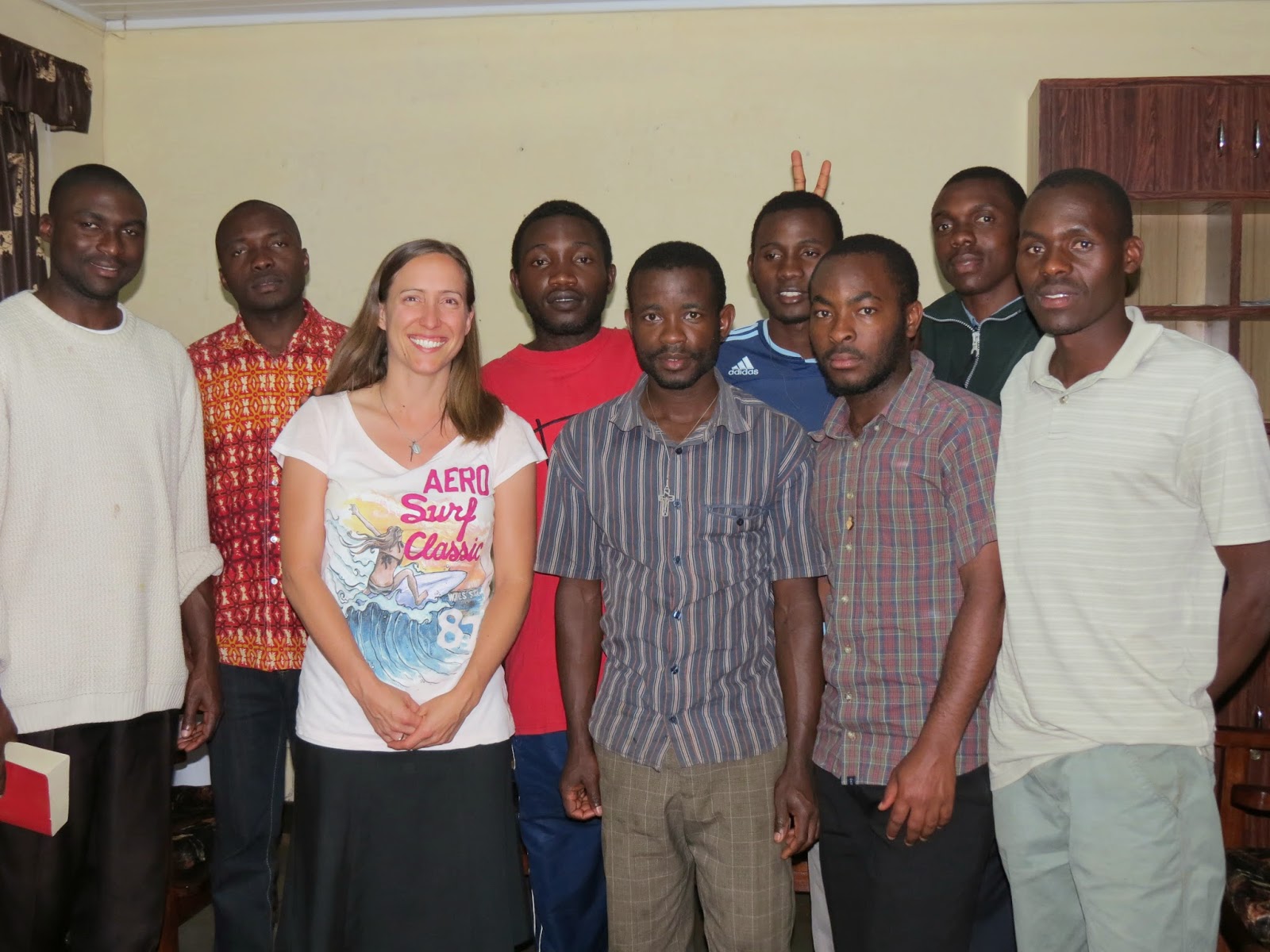 Saying goodbye to the novices was the only time I cried while saying goodbye.  I had so much fun with the novices every Monday night and they really came to mean a lot to me.  They always made me laugh and it was great to see them progress in their English skills. 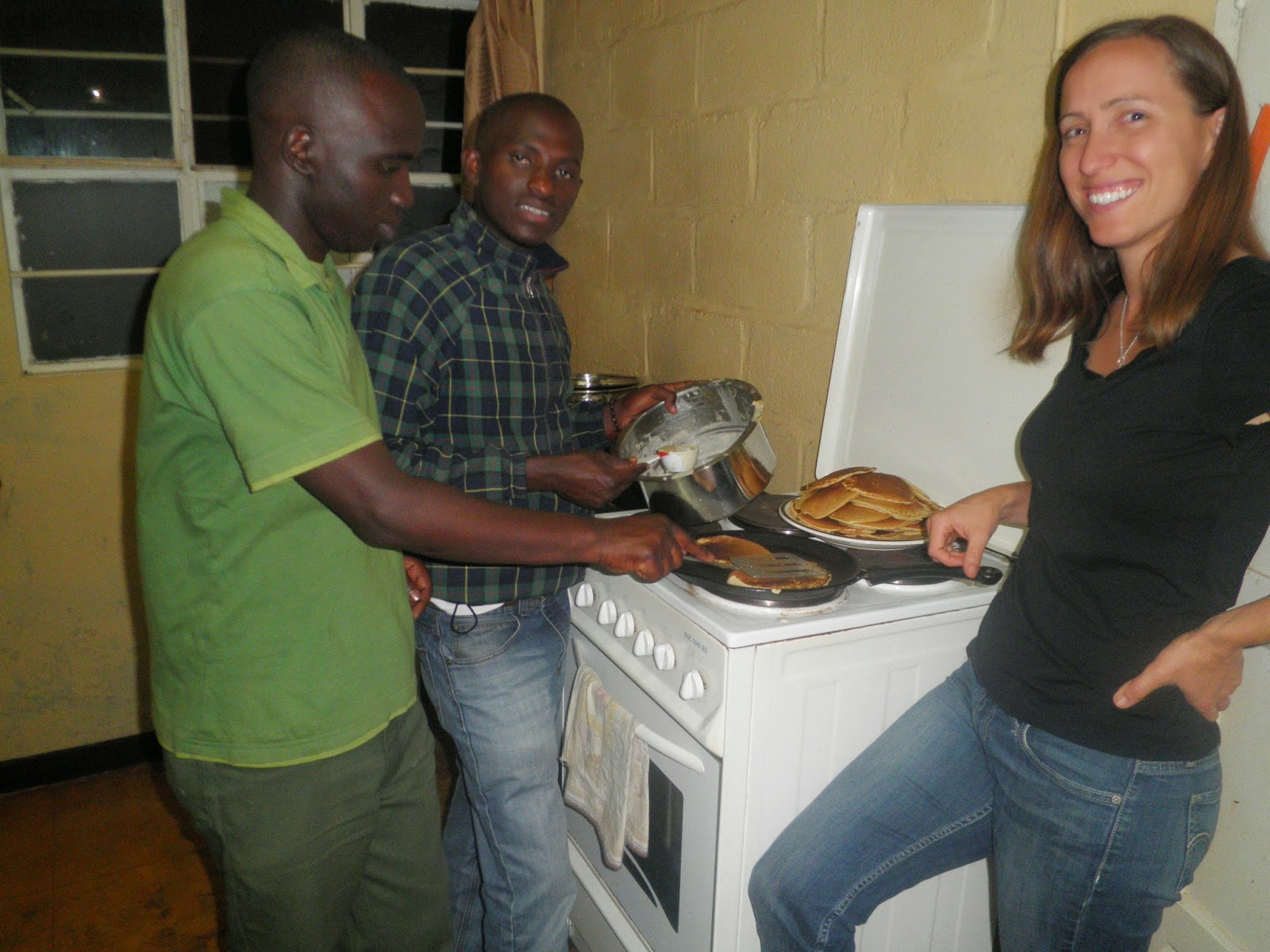 My last full day in Butare consisted of saying goodbye to the students as they loaded onto buses to go home for a few weeks of vacation, lunch with Rita and two colleagues, and dinner with a few guys from the Emmanuel Community.  I got to teach them how to make pancakes. 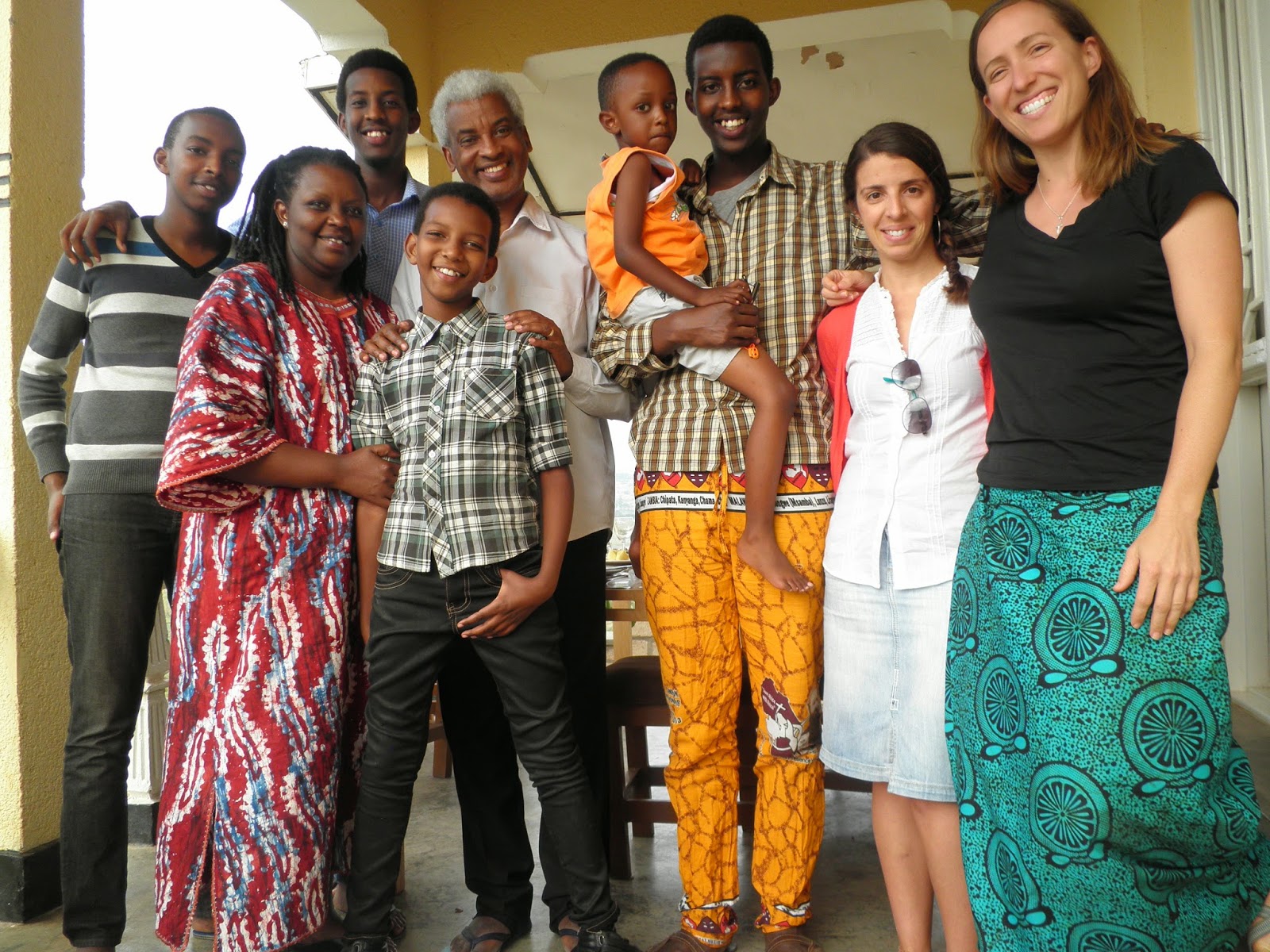 My last weekend in Kigali was spent in Kigali.  I spent a few hours at the Missionaries of Charity orphanage, giving some love to Jessica (who you might remember from my visits in December) and another little girl who wanted to climb all over me.  At one point I had one on my back and another in front.  At night Rita and I celebrated my last night in town by going to Zen, an outdoor Asian fusion restaurant with a very posh atmosphere, something definitely not found in Butare.  Sunday, Rita and I joined an EC family for lunch.  Francois-Xavior, Yvonne Solange, and their kids are a great family.  The parents escaped out of Rwanda during the genocide and their first son was born in Belgium.  They proceeded to have four more sons and from what I can tell, they are all very respectful, attentive to each other, and faithful.  I asked the family what their secret was and while there wasn't one obvious answer, they make time to be together as a family and they bless each other by drawing a cross on each others forehead when they say goodbye.  I like that tradition; maybe I'll introduce it when I have my own family.