And then there were 19 extra Americans in Rwanda 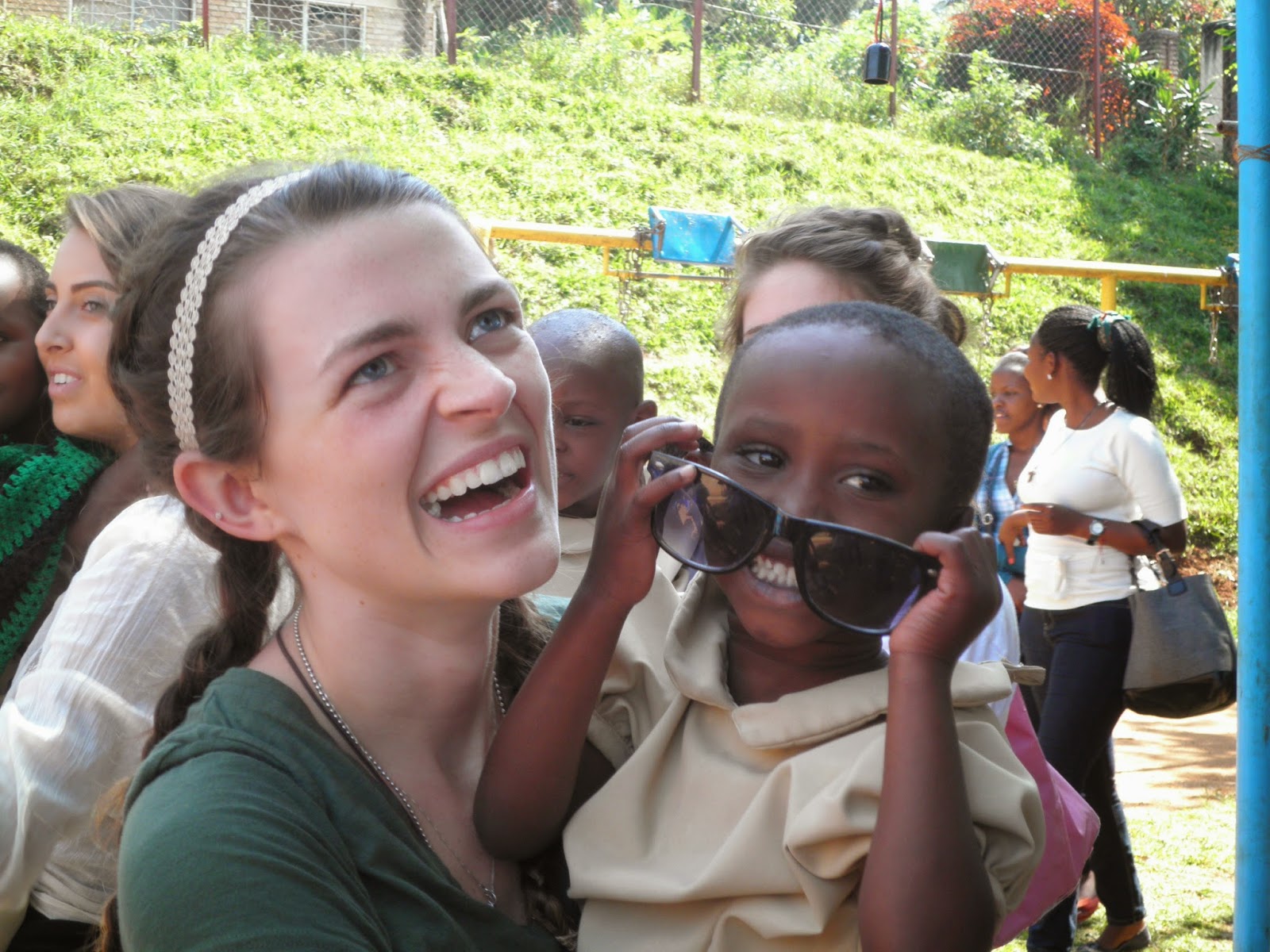 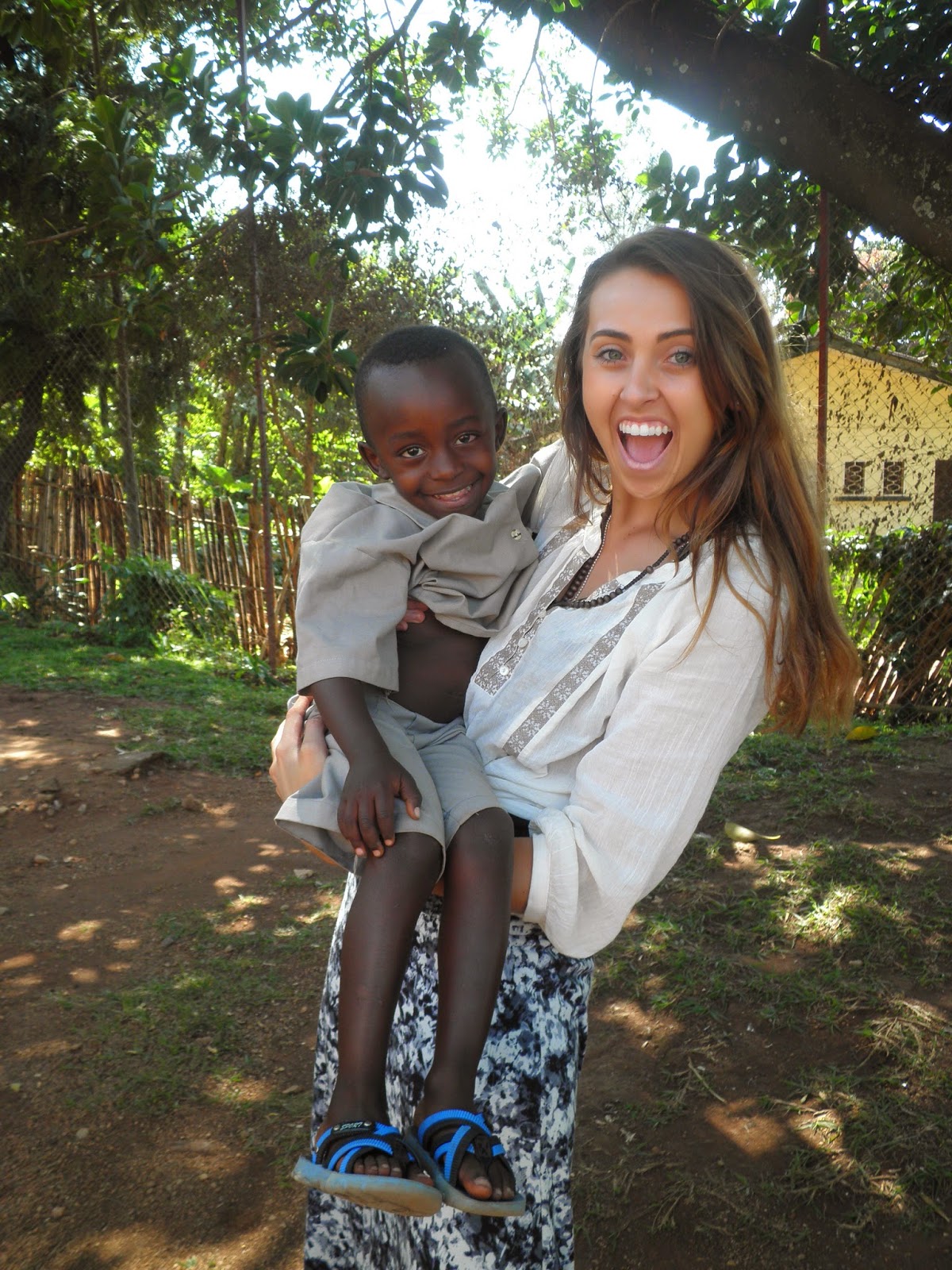 My normal rhythm of life was thrown out the window June 26th when 1 priest and students from CO State (16), CU Boulder (1), and Catholic University of America (1) arrived in Butare for a week of service.  From then until the group's departure yesterday afternoon, life was a whirlwind of activity, sometimes stressful but full of so many good fruits, as I helped the group get from work site to work site, town to city to national park.  Here are some of the many activities they participated in and the people they served. 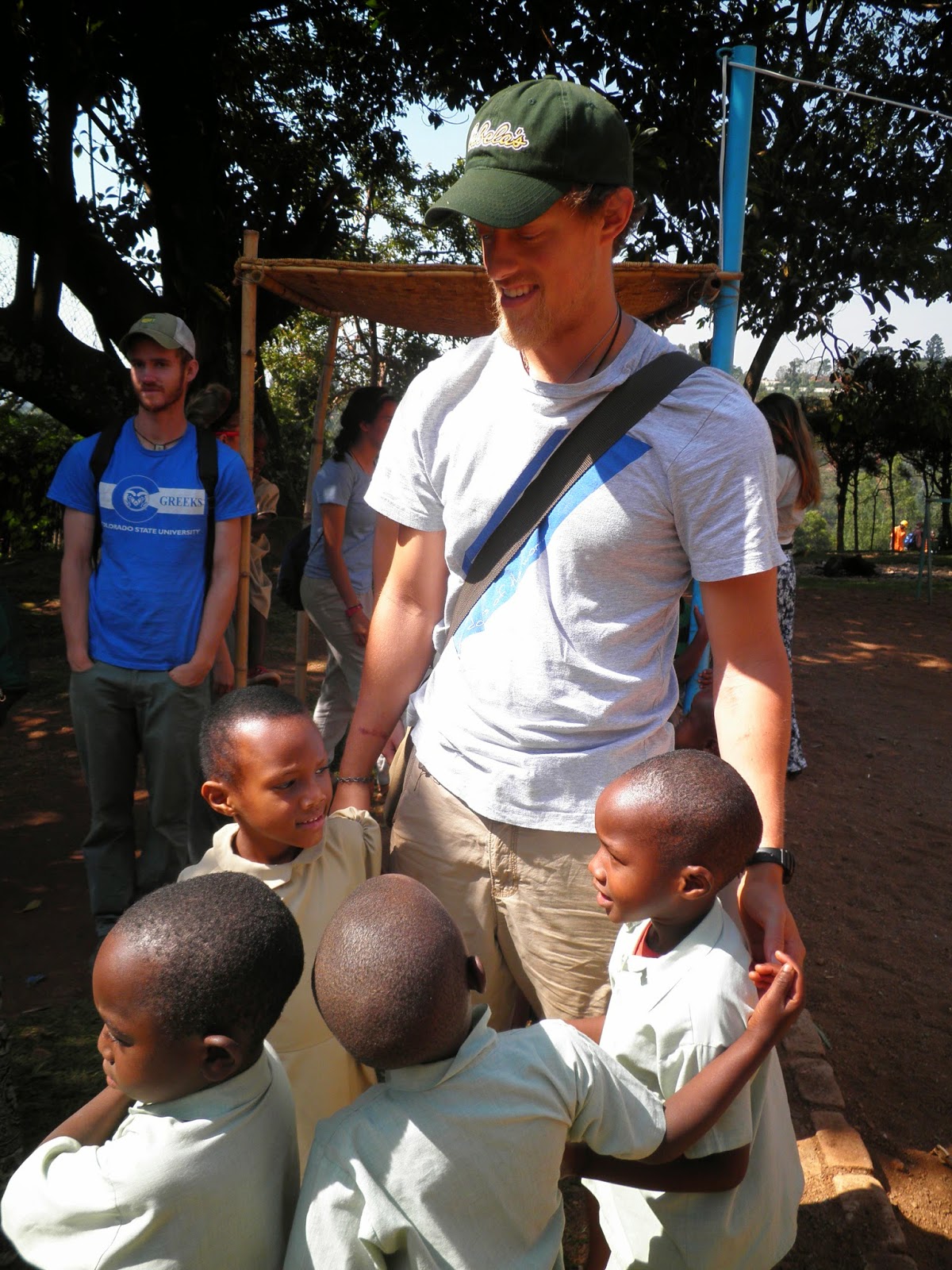 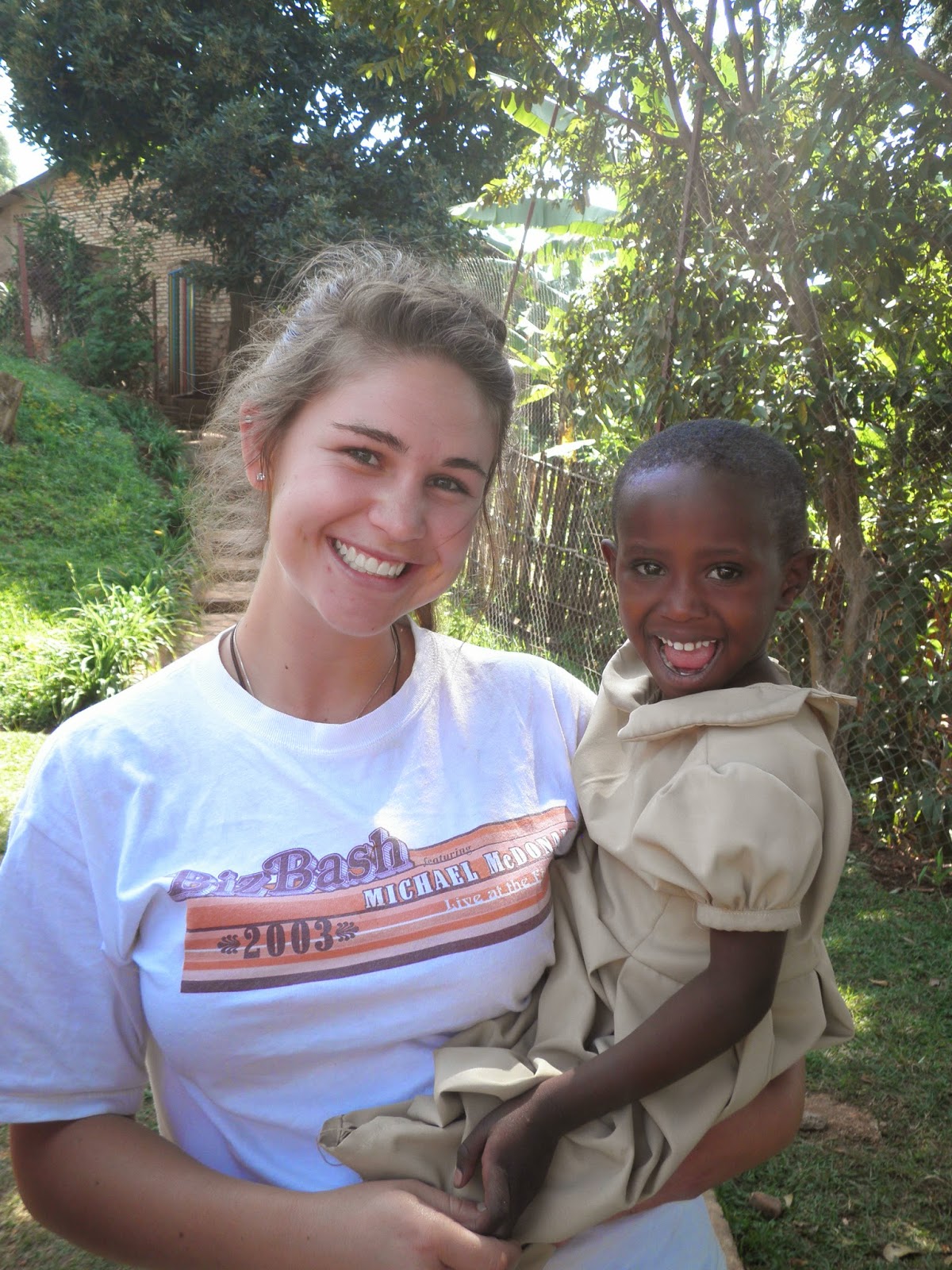 In Butare, there were three main services.  During the weekday mornings the whole group went to the Brazilian daycare/nursery school where my roommate and I like to volunteer.  I had been worried that the guys in the group would find the caretaking boring or that the whole group would overwhelm the site.  Neither were the case.  Each student quickly found a favorite child who would cling to him or her all morning so the students were so happy to return to the daycare to see their special child.  They were also very affected by the life situations of the children.  I knew they are poor, but I didn't realize how bad their home lives are.  Some kids live in places that "are not fit for dogs" (the words of one of the sisters) and don't have beds.  Some kids are the result of prostitution and one of those children has HIV.  These stories were challenging for the group to hear because it made their work seem futile.  Yes, they could love the children for 3-4 hours a day for a few days while they were here, but they can't change their life situations.  I know from Pisuri that that is a hard pill to swallow.

The second service was spending time at two centers for orphaned and street kids, one for girls and one for boys.  I had heard that such centers existed in Butare, but I couldn't find them until I was preparing for the CSU group's arrival.  I went hunting in the general direction that was pointed out to me and asked a few questions and all of a sudden I discovered these centers for abandoned kids.  One thing I noticed when visiting the girls center is how affectionate the girls were.  They didn't know me and yet these 9-11 year olds were giving me hugs in the course of my first exploratory visit.  I think each center was visited two times by members of the CSU group.  The group came with a lot of soccer donations so some of that was given to the boys' center.  At the boys center the volunteers played soccer and at the girls center they made bracelets and practiced dances.

The third main service was manual labor in the fields. The group wanted to get some physical work in while they were in Butare so they cleared and cultivated a field owned by the Brazilian congregation.  That field will help the Brazilians to have more food for their community, which frees up more money to spend on feeding the daycare children.   Their second project was to clear as much of a plot of land that will be used by an Emmanuel Community family for a future house site as possible. 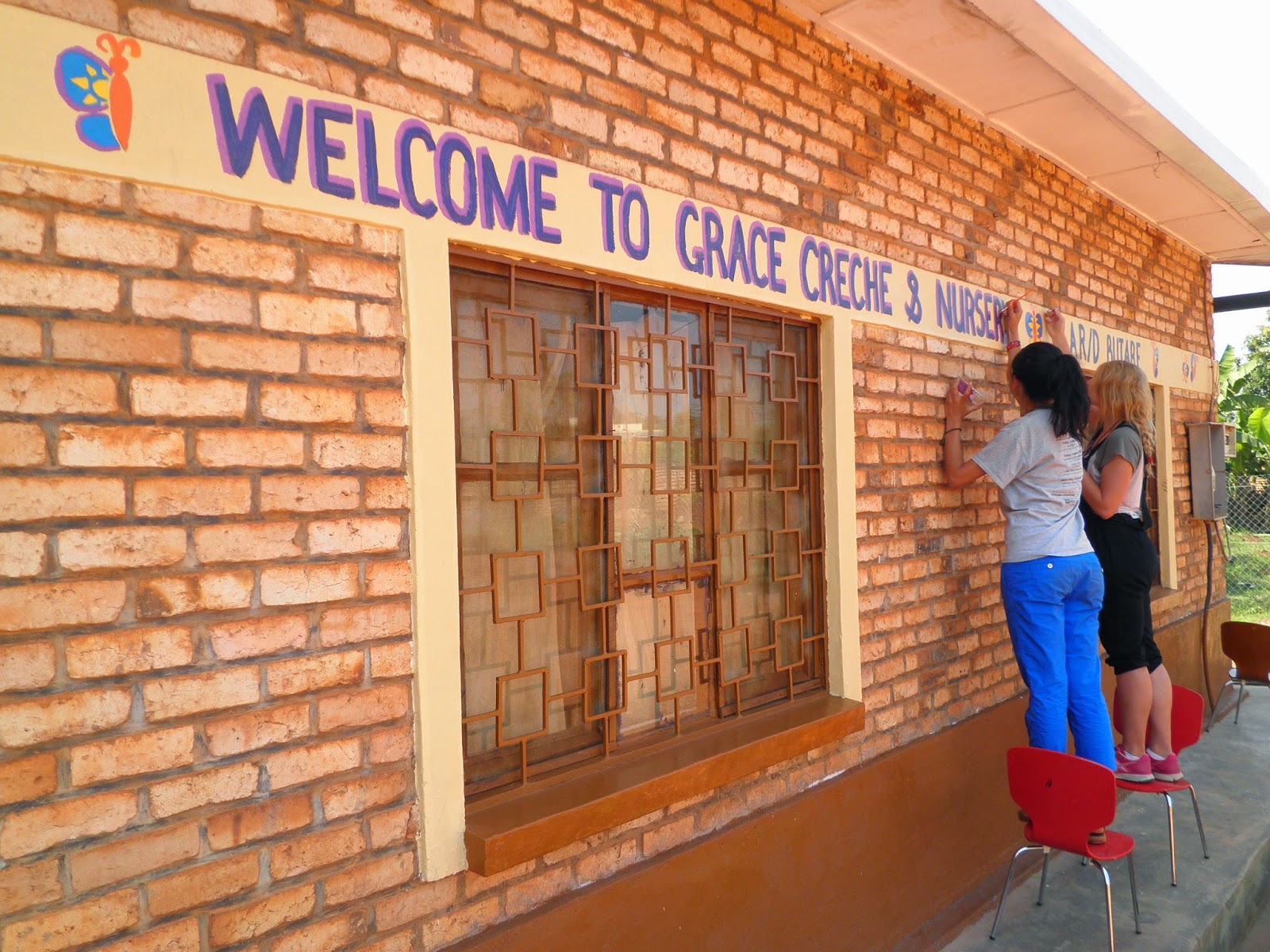 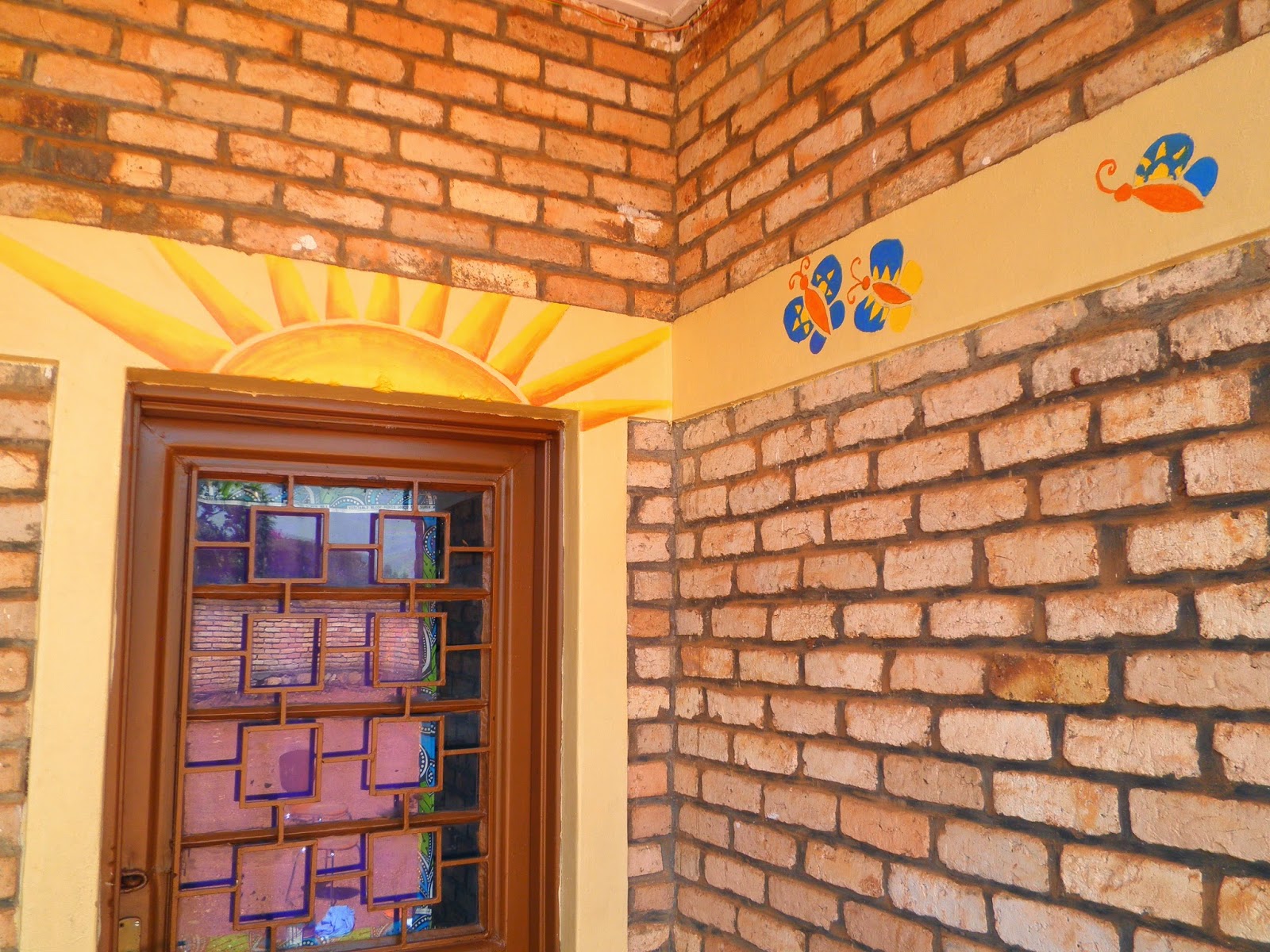 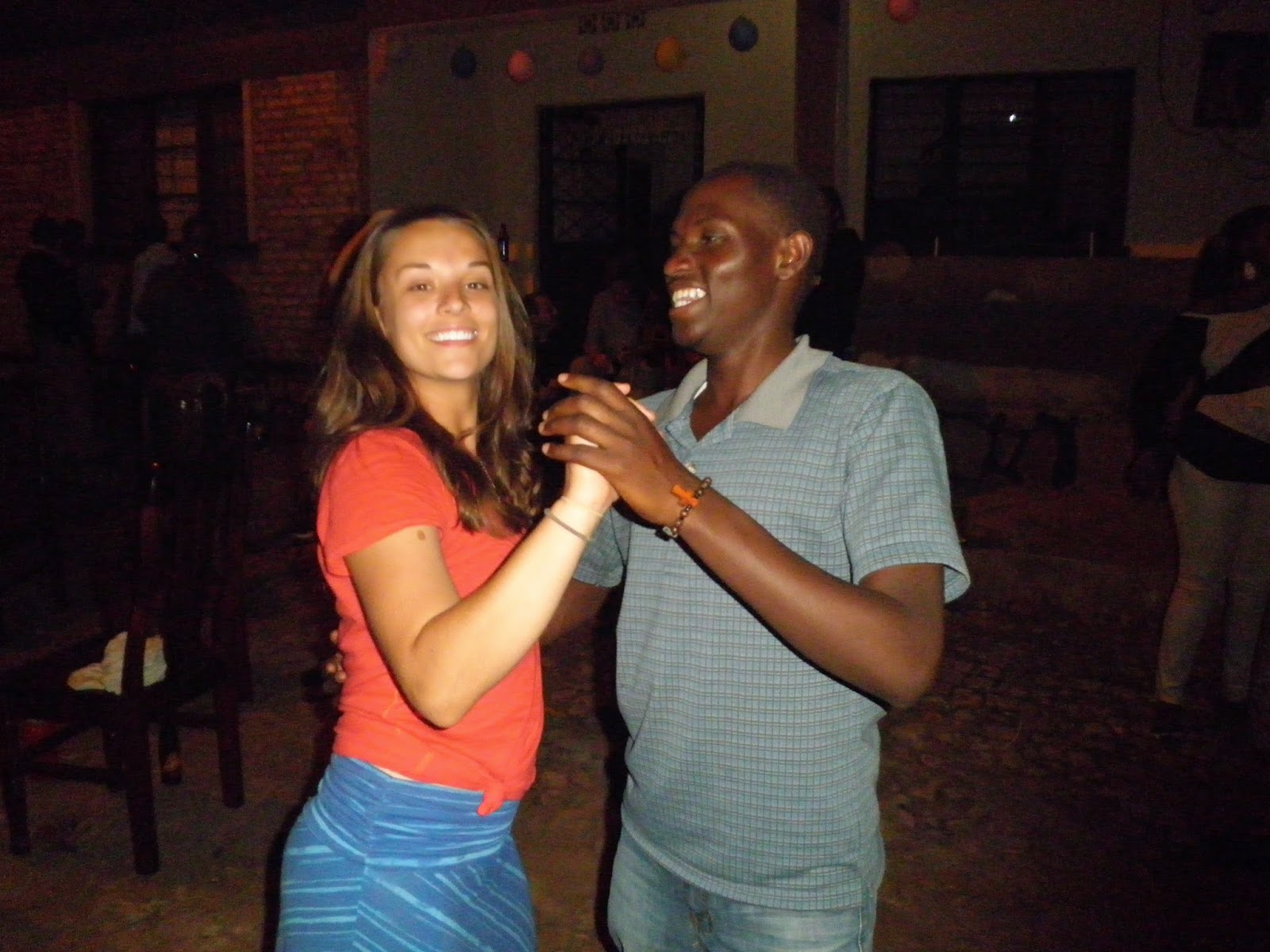 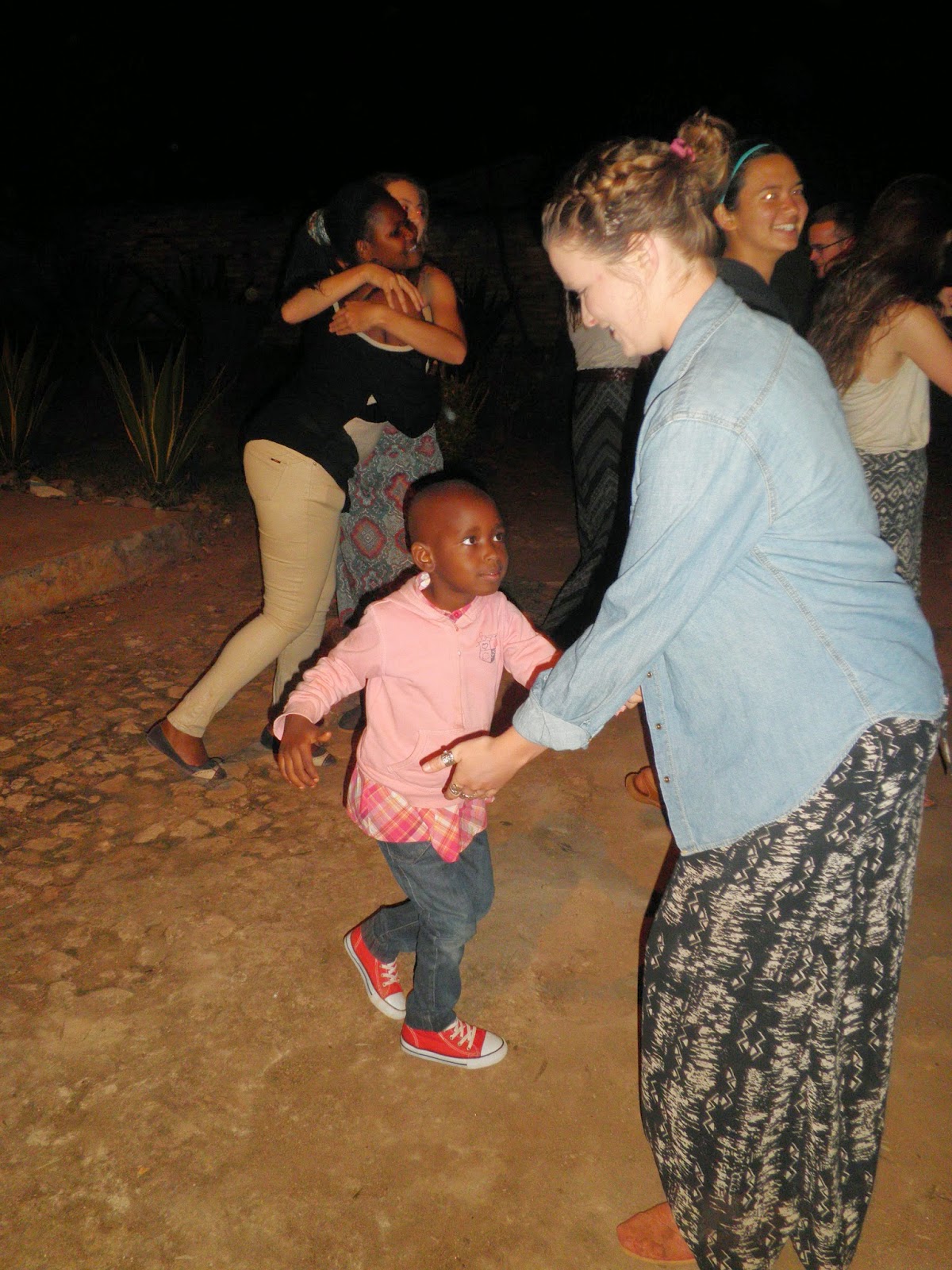 In addition to the three main projects, there were a lot of one-day projects and varied night events.  The night of the arrival they joined my students for the weekly school Mass.  The choir sang English songs and I felt like a proud parent watching her kids use what she taught them.  The group was invited over to the house of the Brazilian community to watch the Chile vs. Brazil World Cup game and then to celebrate the feast of Saints Peter and Paul with food and dancing.  The next morning the group joined the community at their convent for Mass and adoration.  Four women from the group spent a morning painting pictures on the trim of a nursery school building.  Almost all of the women (one was sick) came to my school to put on a mini-retreat for the students.  After an initial song with gestures and a testimony of faith presented to the whole group, the students were divided into groups of 20-30 so they could each have an American girl to lead them in conversation and testimonies for the remainder of the hour.  It was so satisfying to see the students eager to continue talking with the volunteers and to hear the American women say how much they loved sharing with the students.  They went to the home of the local coordinator of the Emmanuel Community for a dinner and dance party.  We showed the Rwandans how to swing dance and the Rwandans taught us how to dance Rwandan-style.  Lastly, the group led a night of prayer and evangelization at the Catholic cathedral.  If you are in the Emmanuel Community, "Mercy Night" is enough to tell you what it was.  For those of you who aren't in the EC, let me paint a picture of that beautiful night.  The Eucharistic Lord was displayed in a monstrance (a gold-plated holder on a stand) on the altar.  The lights were off in the church.  Taper candles held in paper bags by sand formed the shape of a cross in front of the altar on the ground.  Enough candles were lit to illuminate the cross, but others were unlit so the people we met on the streets could come in and light one as a sign of their prayer.  Half of the group stayed inside the church to pray and the other half went out in pairs with paper lanterns to invite passersby to come into the church to pray, to light a candle, to pick a paper with a scripture passage on it, to pray with someone, or to go to confession.  The night lasted for 2 hours and many people came into the church to pray.  It helps that Rwanda is such a pedestrian country.  A few highlights were: one man who was very stressed about life so he prayed for more than an hour and felt so peaceful and relaxed after his prayer time; and three people who didn't have time to enter the church, but when I let them pick a scripture passage and they read it, their faces broke into big smiles and they thanked us for the words they had received.

All of those events happened in six days.  Whoo!  It was a sprint, but my work with the group wasn't finished yet.  We went from a sprint to a long walk, 18 miles to Kibeho to be exact.  On July 2, I guided the group on their pilgrimage from Butare to Kibeho.  I've made the walk two times before, once in November with the visiting American, Paul, and once in March with the university prayer group, but this was the first time I walked in more-or-less in silence and it was great.  I had so much time to pray and to reflect on what I lived in Rwanda and to prepare for what I am about to live in Minnesota.  We spent 3 1/2 days in Kibeho.  There wasn't much of a schedule for the time, which was so nice for the group after two heavily planned weeks (they spent a week in Kigali before they reached me in Butare).  The bulk of the retreat fell on Fr. Dave's shoulders because he led people in prayers for spiritual, mental, emotional, and physical healing, which took about an hour per person.

After Kibeho the group caught two buses, one back to Butare and then one from here to Kigali, on July 5.  We went to bed relatively early because we had a 5 am bus pick-up to go to Akagera National Park.  The group was so lucky with what we saw.  At one point we were watched an elephant about 1/4 around a lake from us.  When the elephant disappeared out of sight, we loaded back into the bus to try to see it again near the road.  Well, we definitely saw it!  As we were driving on the dirt road, we saw the elephant only 30-40 feet away from us, facing the road.  His ears were spread wide and our guide told the driver to put some distance between us and the elephant quickly.  If we had stayed right in front of the elephant in our big bus, there is a chance he could have charged us to show his dominance.  Needless to say, we drove past the elephant and stopped where we could still have a good, but safer, view of him.  It was the closest and the longest I've seen an elephant in the wild.  We also saw hippos out of the water again and some giraffes, but not as close as my first trip to Akagera.  One interesting perspective was seeing how dry the great plain in the north was.  Normally there are many, many animals grazing in the green grass, but the animals were as abundant this time because the plain was so dry.  As you can see in the pictures, a lot of the grasses are brown and dried up.  The dryness made for a lot more dust flying into the bus and coating our skin with dirt.

Yesterday was the group's last day in Kigali so they took advantage of the free day to go souvenir shopping.  They also got to see the boys from the Emmanuel Center in Kigali play soccer decked out in the jerseys, shorts, shin guards, cleats, and goalie gloves that the group had brought them.  They looked so cute and proud.  They were ready for the World Cup of Kigali.

I took advantage of the day to go to the dentist to get some sensitivity checked out and to hang out with the Kigali Fidesco guys.  Some people made me afraid the dentist would be dangerous to go to here because of poor sanitation, but I thought it was very Western looking with new instruments for my visit.  My one complaint is that the cleaning was a bit painful.  The dentist was more firm in his use of the instruments than they are in the States.  With Jeremie and Timothee we went out for an evening of bowling at the Mamba Club.  That is an experience, partially because the lane sloped slightly to the right and because there is a man who sets up and clears the pins by hand.  Due to the sloping lane, I probably had my worst score ever, somewhere in the 60s.