Kibuye and Gisenyi - Two lake side towns with different feels

Rita and I had the opportunity to take a five-day vacation last week and it was amazing!!!  We went with Sr. Adeline, who is our neighbor, and Jeremie, one of the Fidesco volunteers in Kigali.  We went to two Lake Kivu towns: Kibuye, which I had never been to before, and Gisenyi, which I traveled to when I went with the school's dance troupe to a competition, but I saw spent most of this trip in parts of the city that I didn't visit before.  Both places were memorable for different reasons, which I hope you will discover in the rest of this post. 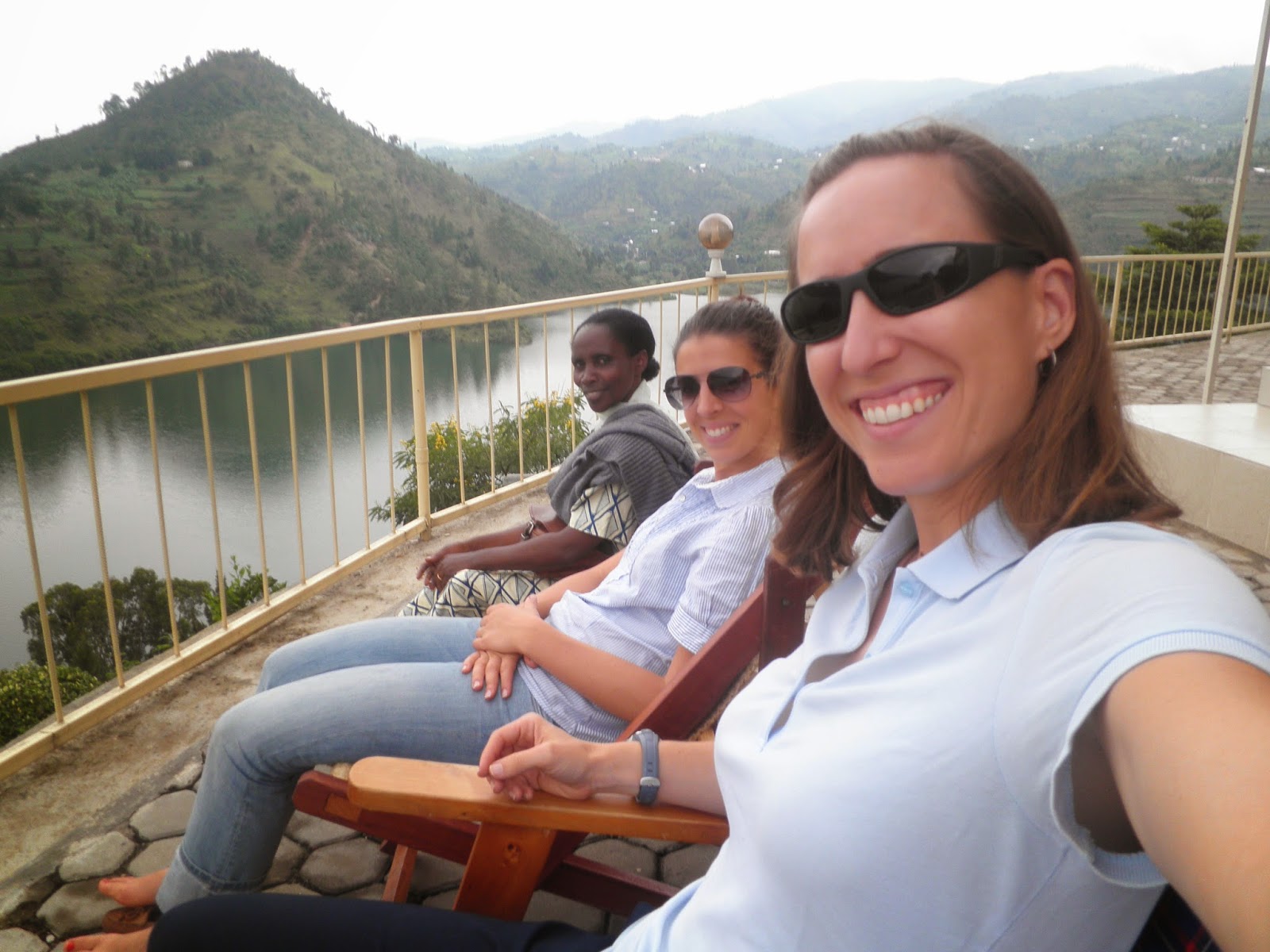 On March 26 Rita, Sr. Adeline, and I rode two buses (4 1/2 hours) to Kibuye, a lakeside town on the western border of Rwanda and about halfway between Cyangugu in the south and Gisenyi in the north.  I had been told before going that our Fidesco predecessors liked to travel to Kibuye whenever they had a free moment and now I understand why.  The Home St. Jean where we stayed is located on a hill above Lake Kivu.  The first night we splurged ($9/person) for a room with a view and were placed in a room that had lake views from 2 of the 4 walls.  We pretty much spent all of the first day and the second morning sitting in lounge chairs outside our room (the photo at right) or sitting next to the water at the base of the hill.  We talked, read, wrote in our journals, prayed, and ate our meals from those chairs. 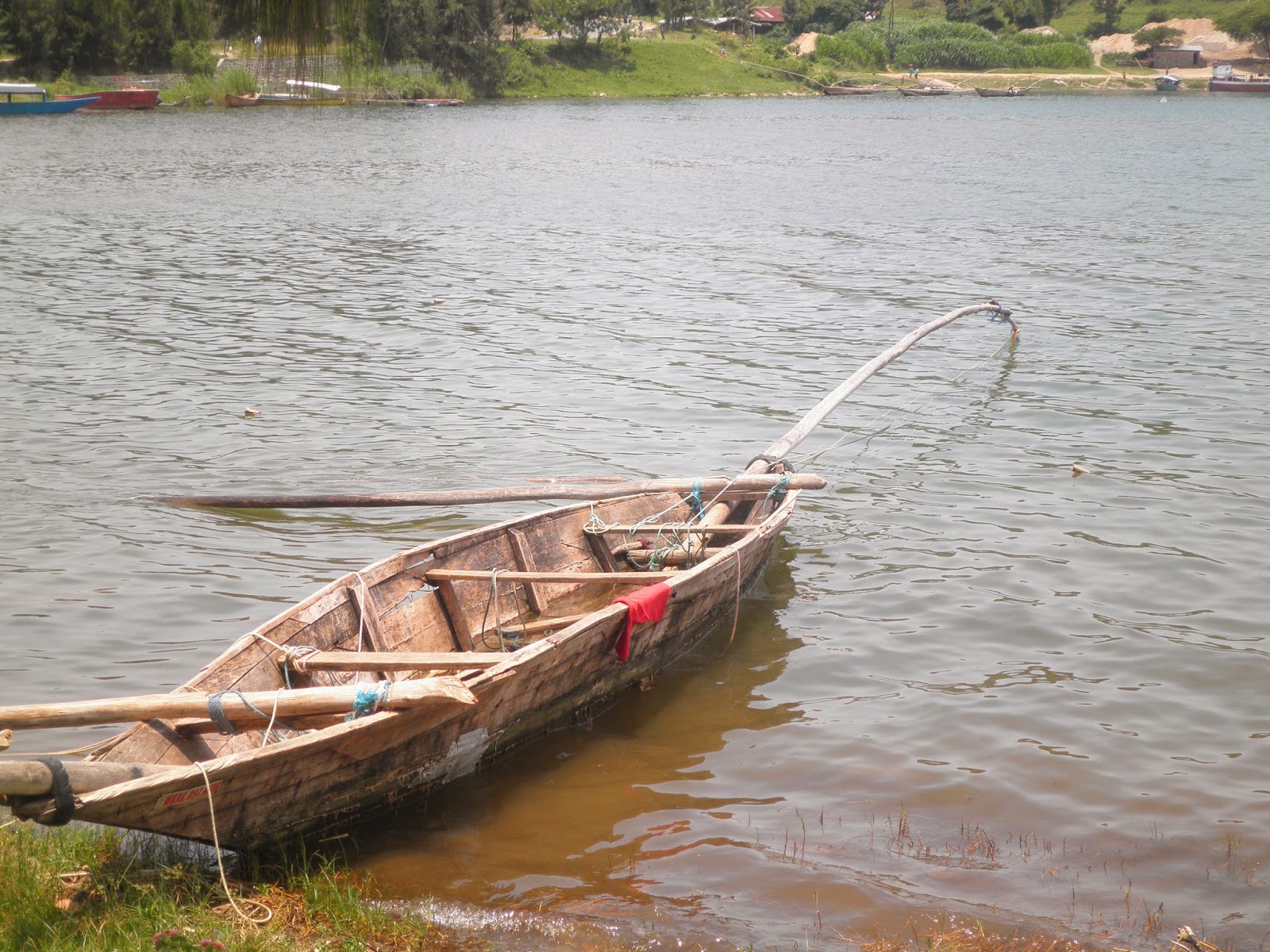 Jeremie arrived the second day so we met him in the city and started our grand tour through the city and hills and along the lake shore.  Along the lake we saw elements from the three-step process of fishing in Lake Kivu for sambaza, small fish that look like sardines but aren't salty.  First there were the fishing boats, one of which is pictured here.  The picture only shows one boat, but there really were two boats connected together with the wood that is going into the water in the left of the picture.  The sticks that bend over the front and back of the boats are used to suspend the nets in the water.  Even after seeing more than one set of boats, I'm still not sure exactly how it works, but it must because then we arrived at the fish processing co-op.  The second step is the drying.  The co-op was along the shore and included many screens suspended horizontally above the ground with the little sambaza drying on them in the sun.  As we were admiring the process of frying up some sambaza in huge woks heated over wood fires (the third step), Sr. Adeline convinced the lady to let us try some.  Before we knew it, she salted the cooked fish and handed us a take-out container full of them. They are only 1 - 1 1/2 inches long so we ate the entire fish, eyes and fins and all. 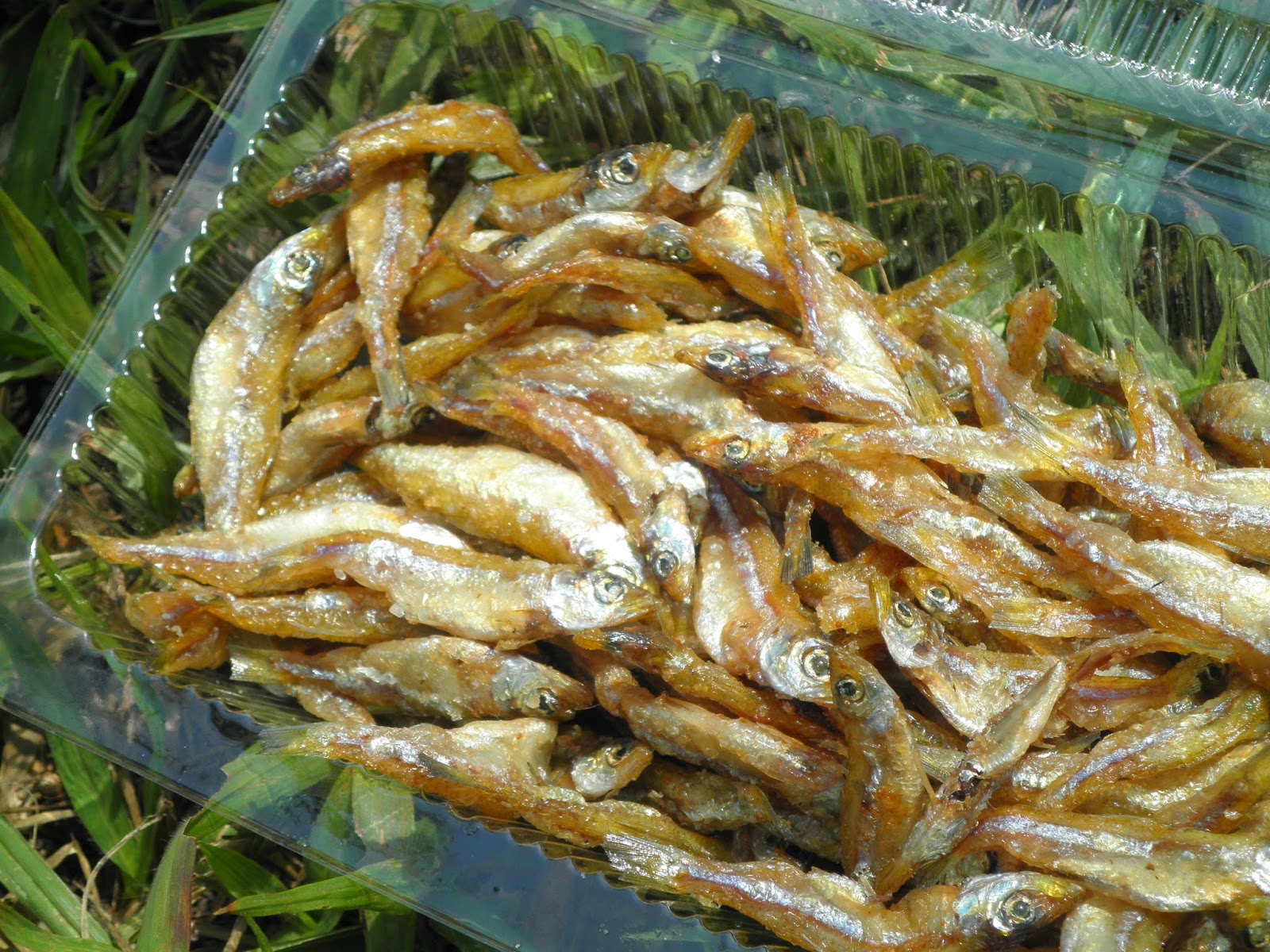 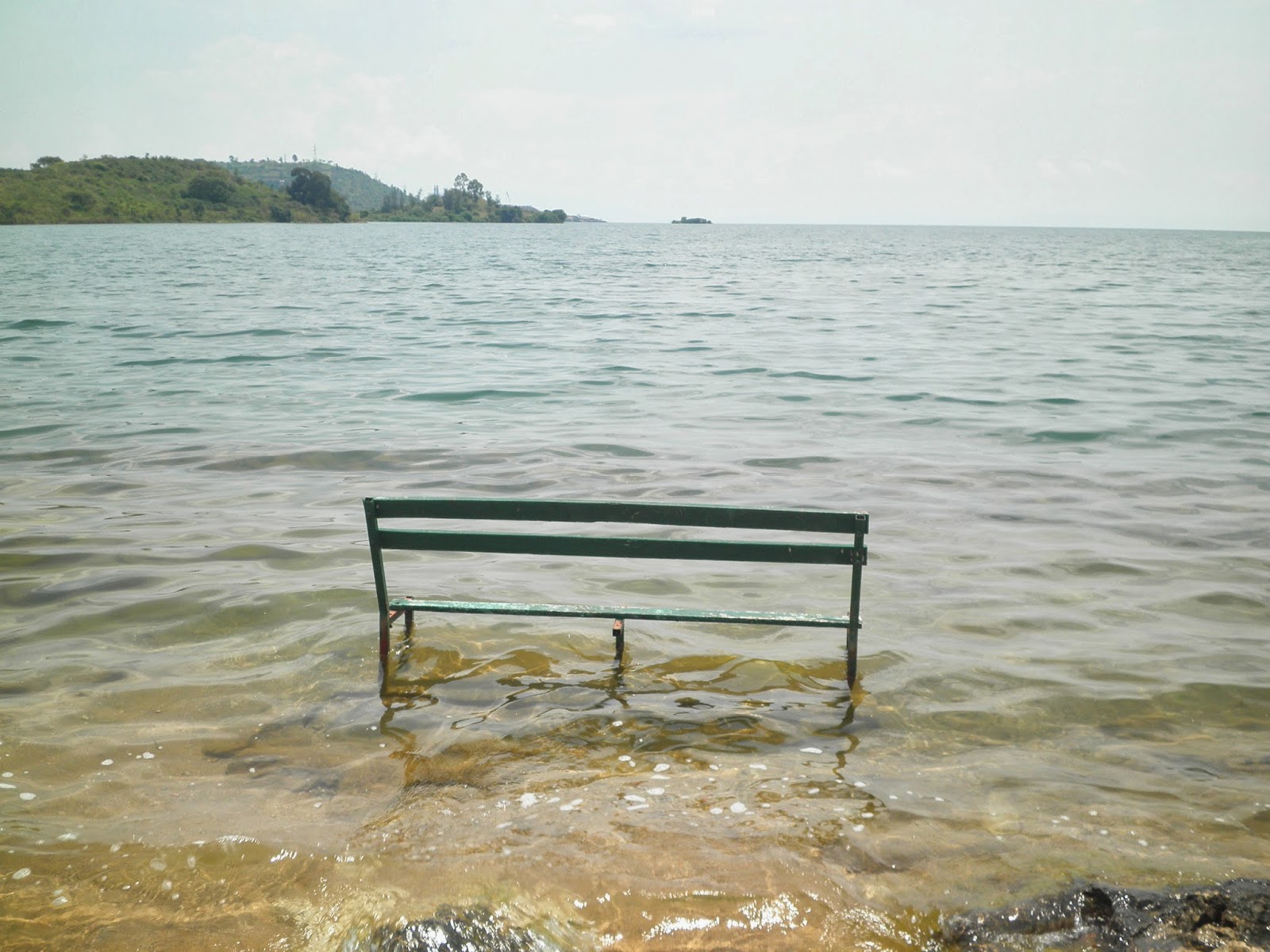 After enjoying the oily, salty sambaza, we walked under a crossing guard gate that no one was manning and ended up in the private gardens of a colonel.  No one was there so we kept walking until we discovered a sandy beach.  Wow, if only I had my swimsuit with me at that time!  Most of the lake shore along Lake Kivu in Kibuye is rocky or covered with grass, but here was a sandy beach with two benches in the water and a jumping platform.  Jeremie had his boardshorts so he enjoyed the jumping platform and we ladies sat on one of the benches with our feet in the water.  Wow!  We only left because we could hear thunder in the distance and then the gardener told us it was a private garden. 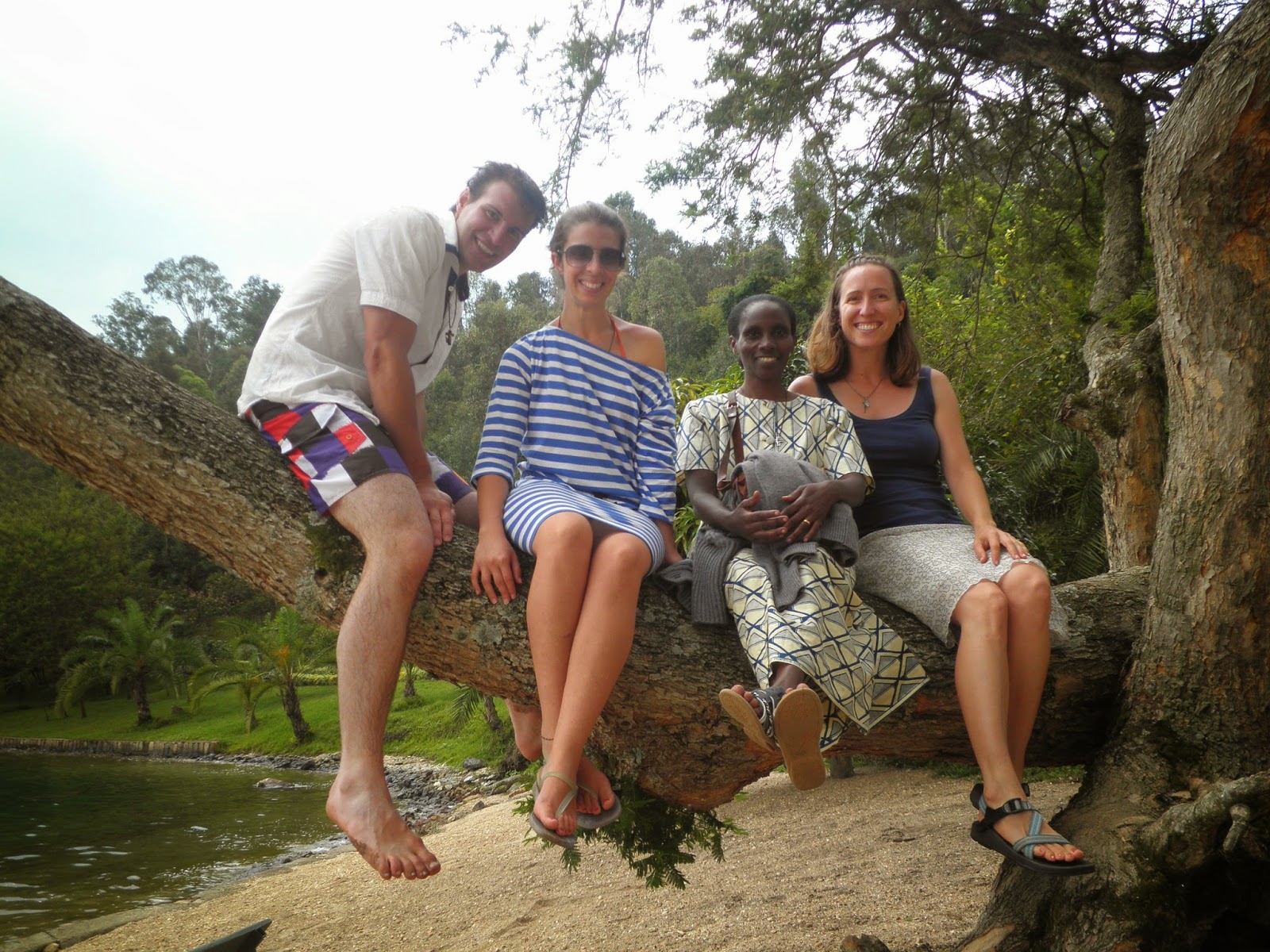 Later that day, in the late afternoon, the four of us walked down to the lake below our guesthouse and sat there until it was dark.  We sang Emmanuel praise songs.  We took pictures.  We shared about our hopes for the future.  I wove a crown out of pine needles, which we ladies took turns wearing.  We ate dinner at an outside table until a rainstorm pushed us inside. 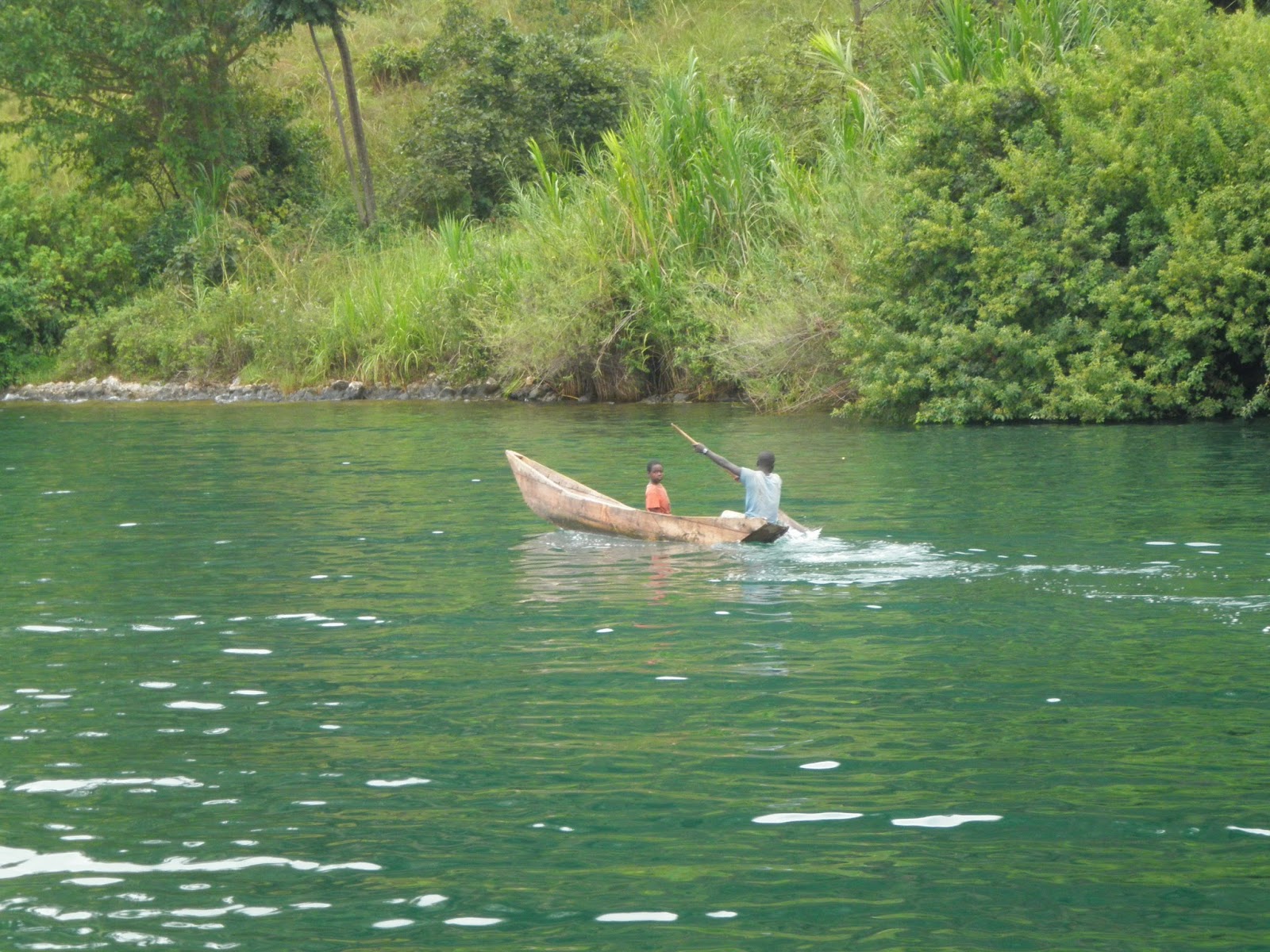 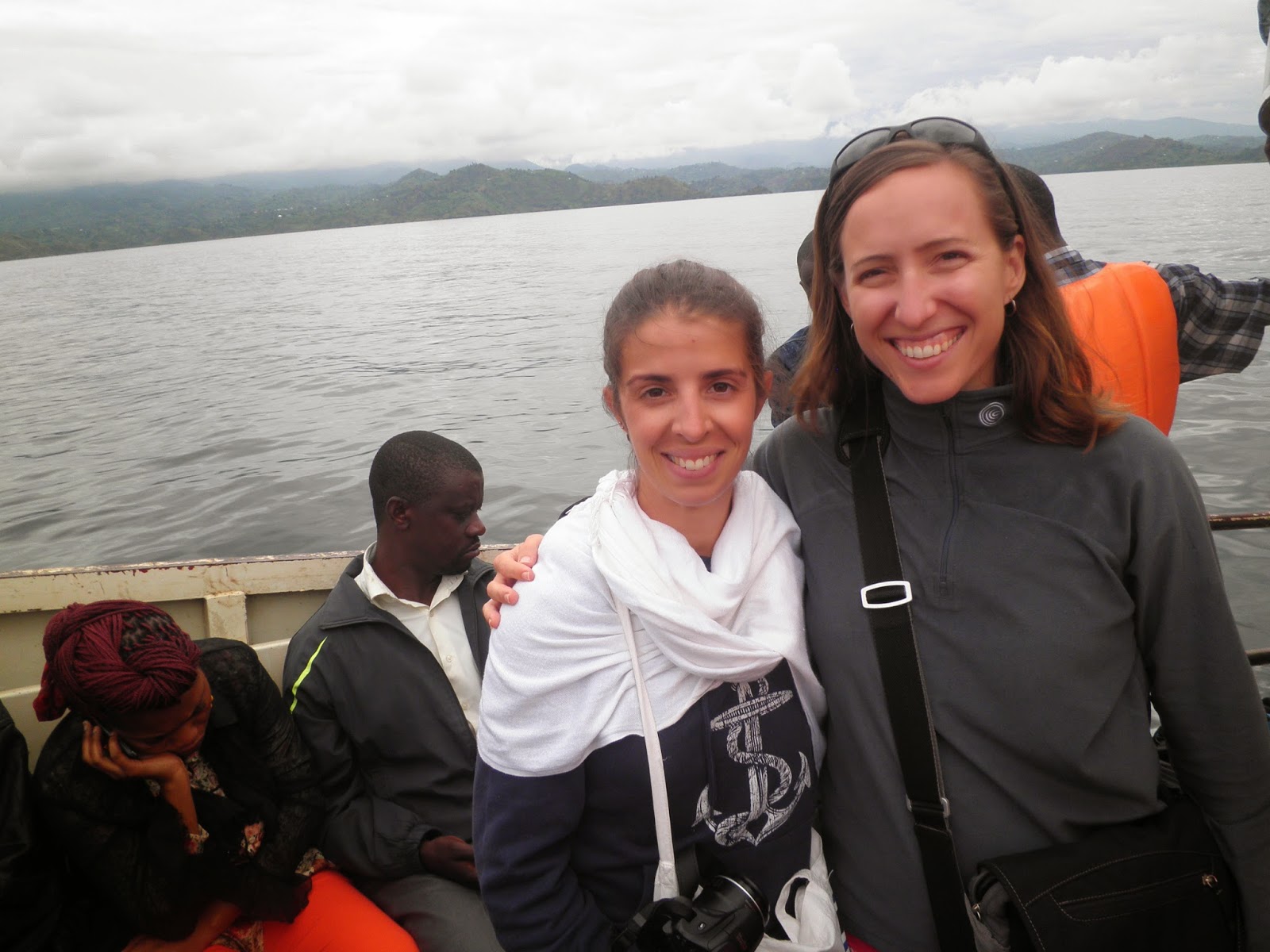 The third day, Friday, we rode a boat from Kibuye to Gisenyi, the northern lake town.  The trip was three hours and the inside cabin was definitely a vision of the developing world.  More people were on the boat than there were seats so people made seats out of sacks of rice, beans, and sugar.  A woman unrolled her woven mat and sat down comfortably.  The cabin was too crowded for our tastes so we went to the front of the boat where there were fresh air and great views but no open seats.  My feet hurt after three hours of standing, but the ride was worth it.  We were surrounded by water and the green hills of Rwanda and the Democratic Republic of Congo.  We saw local fishing canoes up close.  We got another taste of Rwandan life.  And we even met an American named Kyle who was spending the year traveling through Europe and Africa and spent most of the ride talking with him.

In Gisenyi we stayed at the home of Sr. Adeline's nephew and niece-in-law, Michel and Claudine.  They have two kids: Shema who is five and Sara who is 1 year and 2 months.  Staying with a local family makes for a different type of vacation because they had things they wanted to show us and do with us so we didn't lounge at the beach all day.  The time in Gisenyi was different than that in Kibuye, but it was also nice.

First, the family fed us like kings.  Friday night there was both fish and beef, along with the usual assortment of rice, beans, potatoes, green cooked leaves, cassava dough, green bananas, fruit, and Rwandan tea (milk and sugar).  Saturday morning we ate outside under the avocado leaves and enjoyed bread, avocado, honey, and tea.  Saturday night we ate at the home of Sr. Adeline's sister-in-law (her deceased brother's wife) and again we were offered fish and meat and the usual assortment.  Sunday morning we ate beignets (basically plain donuts with a different shape) and omelets and returned home after Mass for another meal of the Rwandan staples along with fresh pineapple.  Yum, yum, yum! 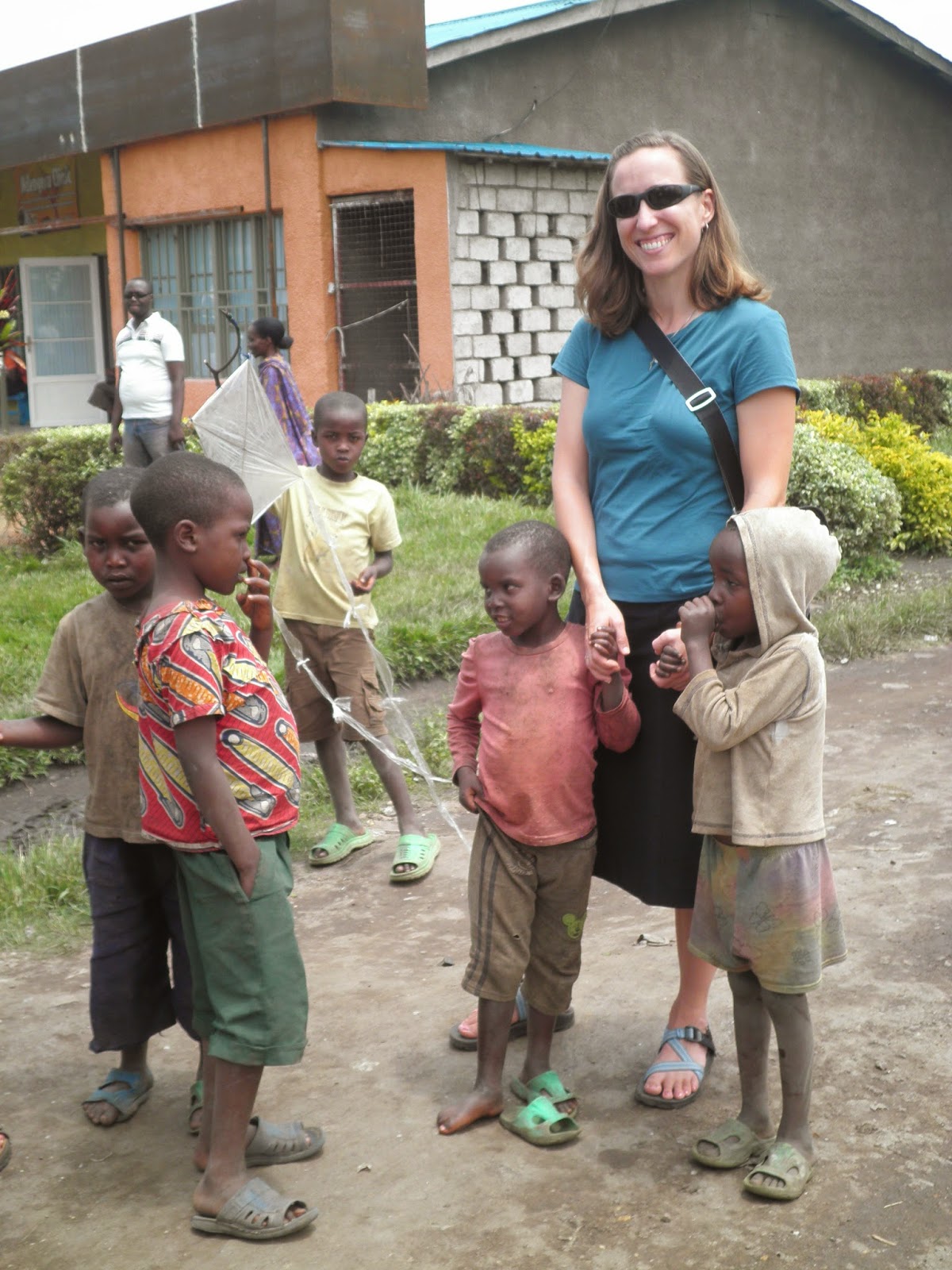 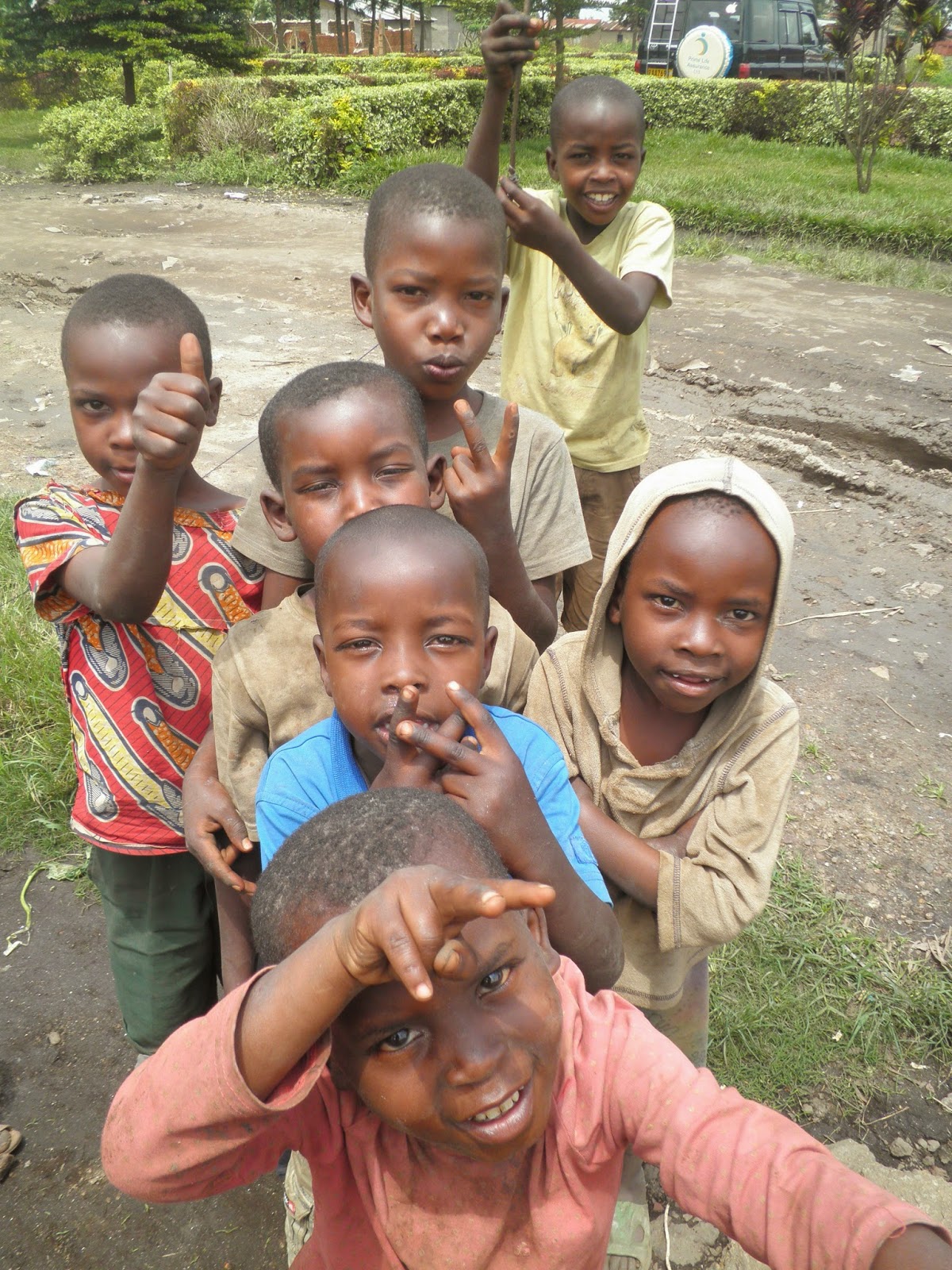 Secondly, Michel showed us a part of the city that tourists normally wouldn't see.  From his house we walked about an hour to his new plot of land that he plans to build a house on someday.  I noticed a few things that are different than I have seen in Butare or Kigali, such as: uneven dirt roads that are rutted or bumpy because of the volcanic rock underneath, and houses without walls around them so I could see the women grinding floor or washing their clothes.  As I walked through the streets, I thought to myself, "This is closer to what I pictured when I thought of Africa," and I loved it.  I could envision a ministry of presence where someone's ministry is to walk through the neighborhood, get to know the people, be present to listen to their stories or problems, offer what little medical skills or food one has, etc.  I'm not saying it will be my ministry for the next year, but if God wanted to call me back to Rwanda to walk the streets of Gisenyi, I wouldn't mind.  The desire is helped by the fact that wherever we walked, children ran from their houses to get a closer look at us, yelled "Abazungu!" (white people), and waved at us.  The African children bring me so much joy, but it is easy to bring them joy too.  All it takes is a wave and a smile.  Once we arrived at the plot of land, I made friends with the children who were in the street flying a handmade kite.  I taught them how to have thumb wars and let them ham it up for pictures.  We had quite a group following us and walking with us and holding our hands as we walked home. 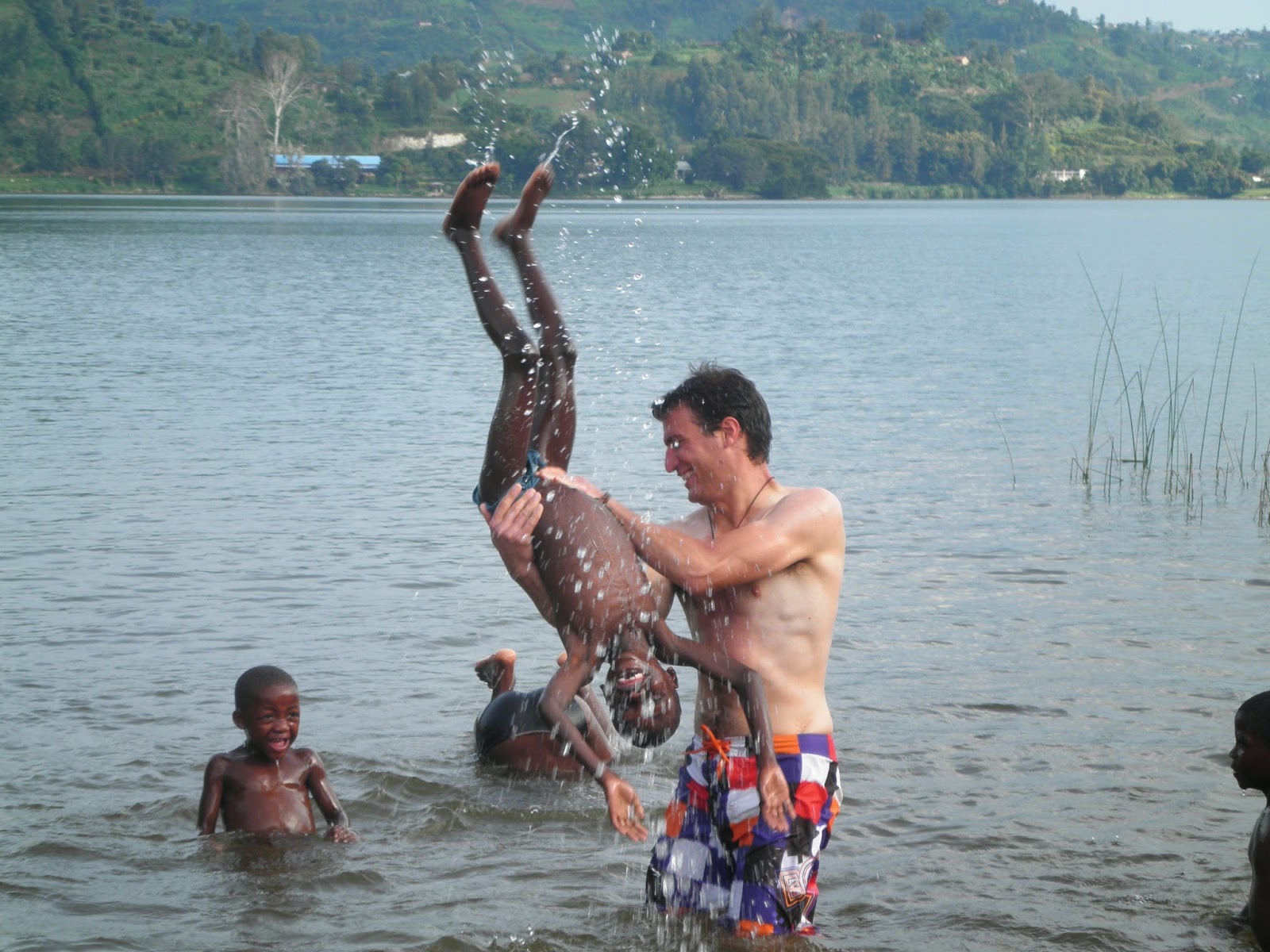 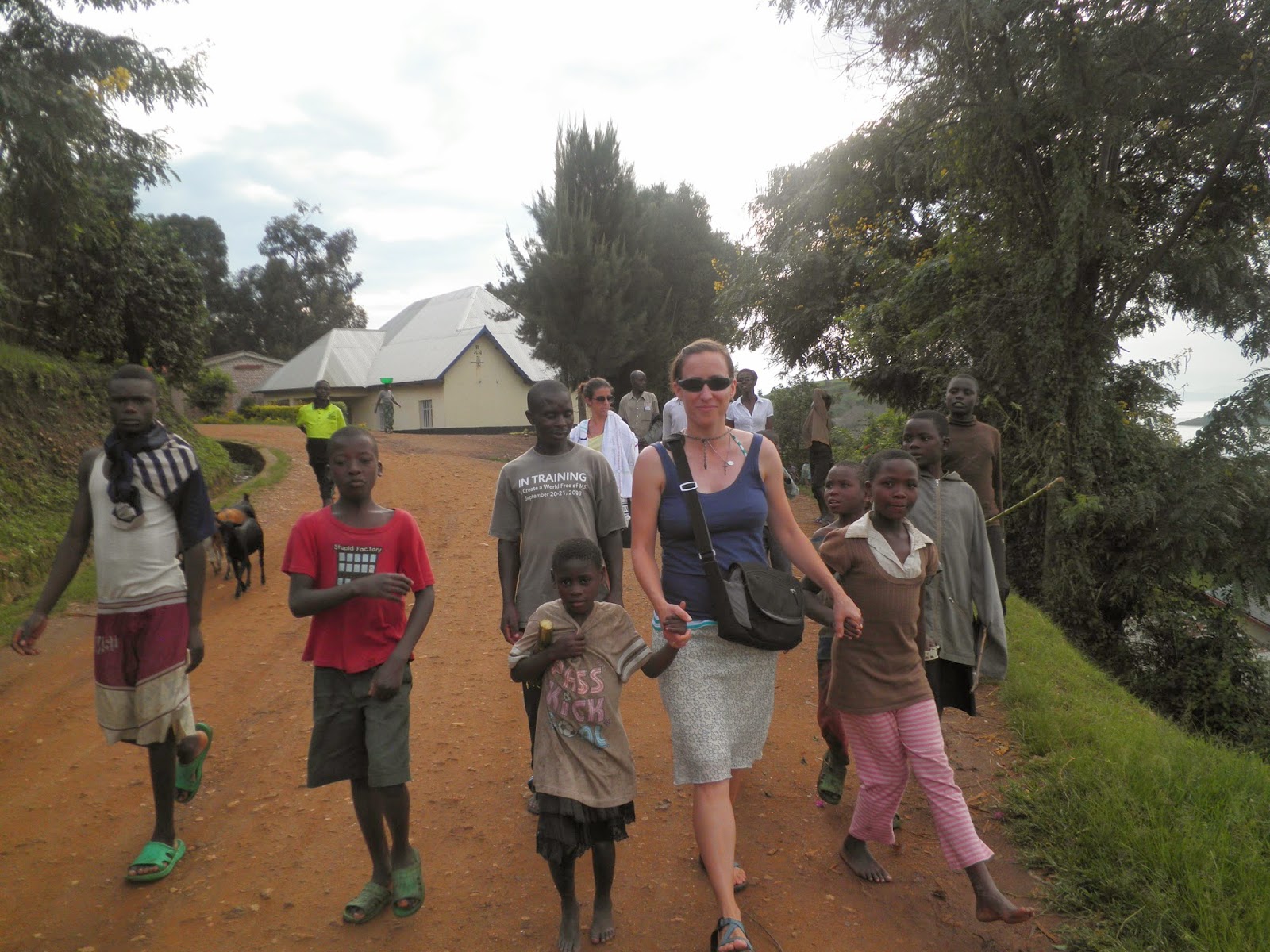 After the morning trip to the plot of land, we had another opportunity to encounter local people through an afternoon trip to some hot springs.  When Rita spoke about hot springs, I pictured a nice natural pool that we could soak in, just like a jacuzzi.  Boy, was I wrong!  We arrived at the hot springs to see some pools just bigger than puddles and very, very hot!  A man told me they were 75 degrees Celsius, which is hotter than I could stand to be in for longer than a few seconds.  Yet I was amazed to see Rwandans sitting in them and washing themselves with the "healing" water.  I was treated to a hand massage by some children who escorted us to the springs.  The spring water fed into the lake and while Rita and I didn't feel comfortable stripping down to our swimsuits in the midst of so many curious people (we amuzungus were already making quite a stir and attracting onlookers at the hot springs), Jeremie went into the water and interacted with the boys by throwing them into the water and spinning them around.  Soon we left those springs for an escorted trip to the other hot spring in the area, this one only for men.  Adults and children guided us from one spring to the other.  Since the other spring was for men and was just as hot, we quickly left and started the walk back to where we started, this time with more of an entourage than we started with (see the photo above).  Eventually the children left us and we caught a bus to the last stop of the day, the beach near the Lake Kivu Serena Hotel.

From this part of the beach, the lake reminds me of the ocean. Sometimes there are small waves and the land across the lake is far enough away that it could be Catalina Island off the shore of California.  The sun sets over the water so it is like the view of the sunset from Cali.  There is sand and a small pier that is fun to jump off of (it's less than 10 feet above the water).  We arrived in the late afternoon so we didn't have a lot of time to swim, but Jeremie, Rita, and I took advantage of the time that we had.  Jeremie and I went over to the pier and showed off our jumping skills to a group of local boys and young men.  We raced against four of the men in freestyle and backstroke, during which Jeremie had a fish enter his mouth.  He didn't eat it though!  Soon it was time to walk back to Michel's house in the dark so we walked along the lake sidewalk for as long as we could and saw all the fancy houses. 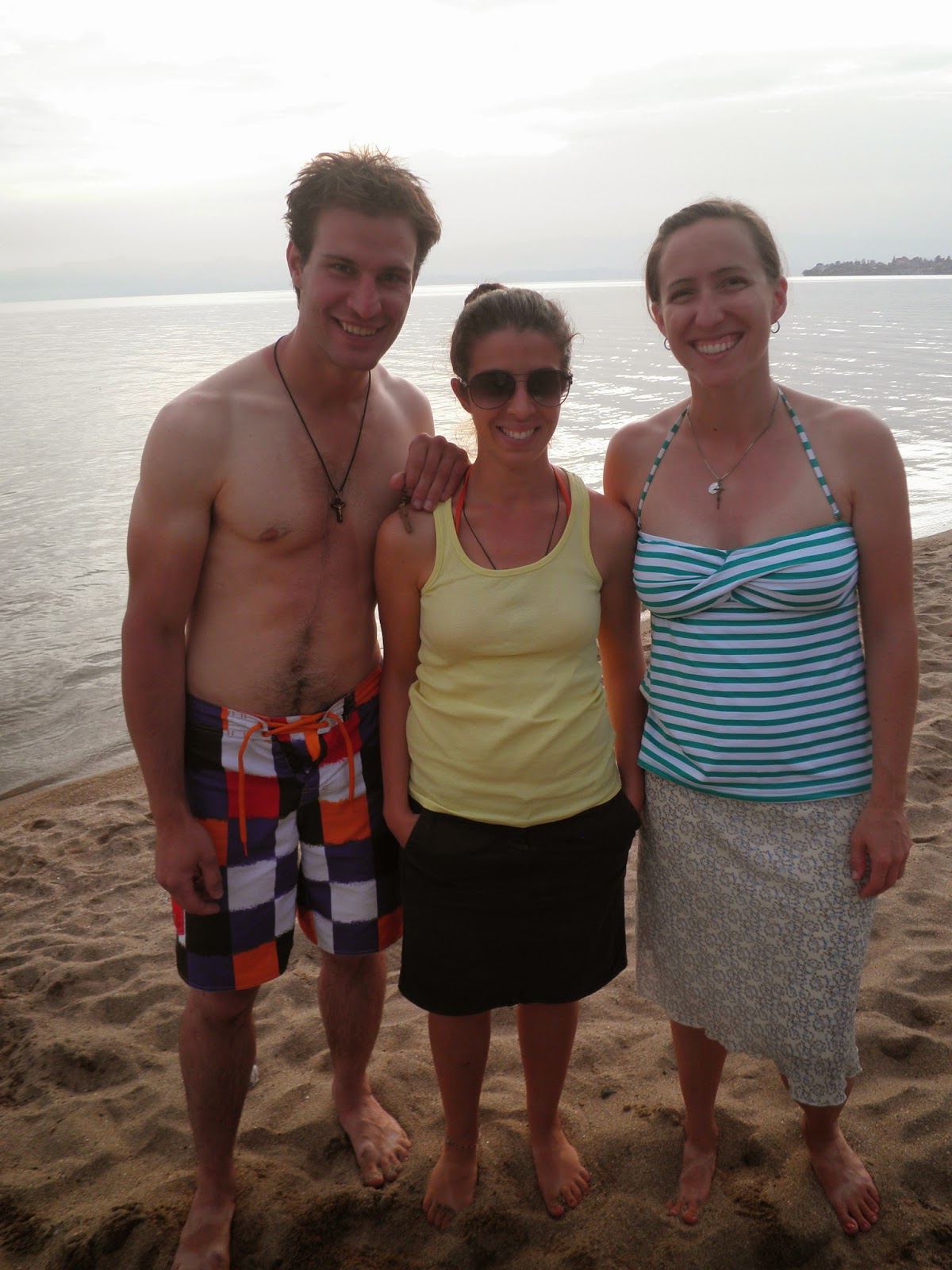