This past weekend I stole away from Butare after classes on Saturday morning and headed to Kigali for a short, 30 hour visit.  I had a few objectives: visit the Missionaries of Charity orphanage that I hadn't been to since New Year's Day, go shopping at a market that has great prices on Rwandan handcrafts, and see the French Fidesco volunteers and a Coloradan woman, Megan.  I succeeded in accomplishing all three objectives and still managed to fit in a free jazz/blues concert at the Goethe Institute (a German organization) and a late-night dinner of Mexican food at Meze Fresh.  Yum!

The highlight, for sure, was visiting the orphanage after five months.  When I arrived on Sunday afternoon, there happened to be a going-away party for three of the sisters who will move to other convents so all of the babies, children, handicapped adults, and sisters were gathered outside in the lower level for the party.  It was really nice to see all the children together because the older girls (6+) entertained and looked after the younger kids so the children weren't bored.   I saw little Jessica, the girl I wrote about in my first mission report and on the blog, and said hi to her, but she was so busy dancing and looking at a history textbook with an older girl that she didn't need attention from me.  So instead, I got to hold a baby for most of the party and when she was taken from me, I sat down on the curb and played with a few other children.  One touching encounter was with Katy, a seven year old, who was sitting a few seats away from me.  I noticed she was sucking her thumb and not interacting with anyone so I touched her to get her attention and smiled at her.  She smiled back and then moved from her perch to sit next to me on the curb.  I put my arm around her and she grabbed it and held my hand.  Eventually she rested her head on my knee and I stroked her hair.  When it was time for me to leave, she held my hand the whole way to the gate.  Katy is a good example of how not only young children, like Pisuri and Jessica, need affection but also older ones. 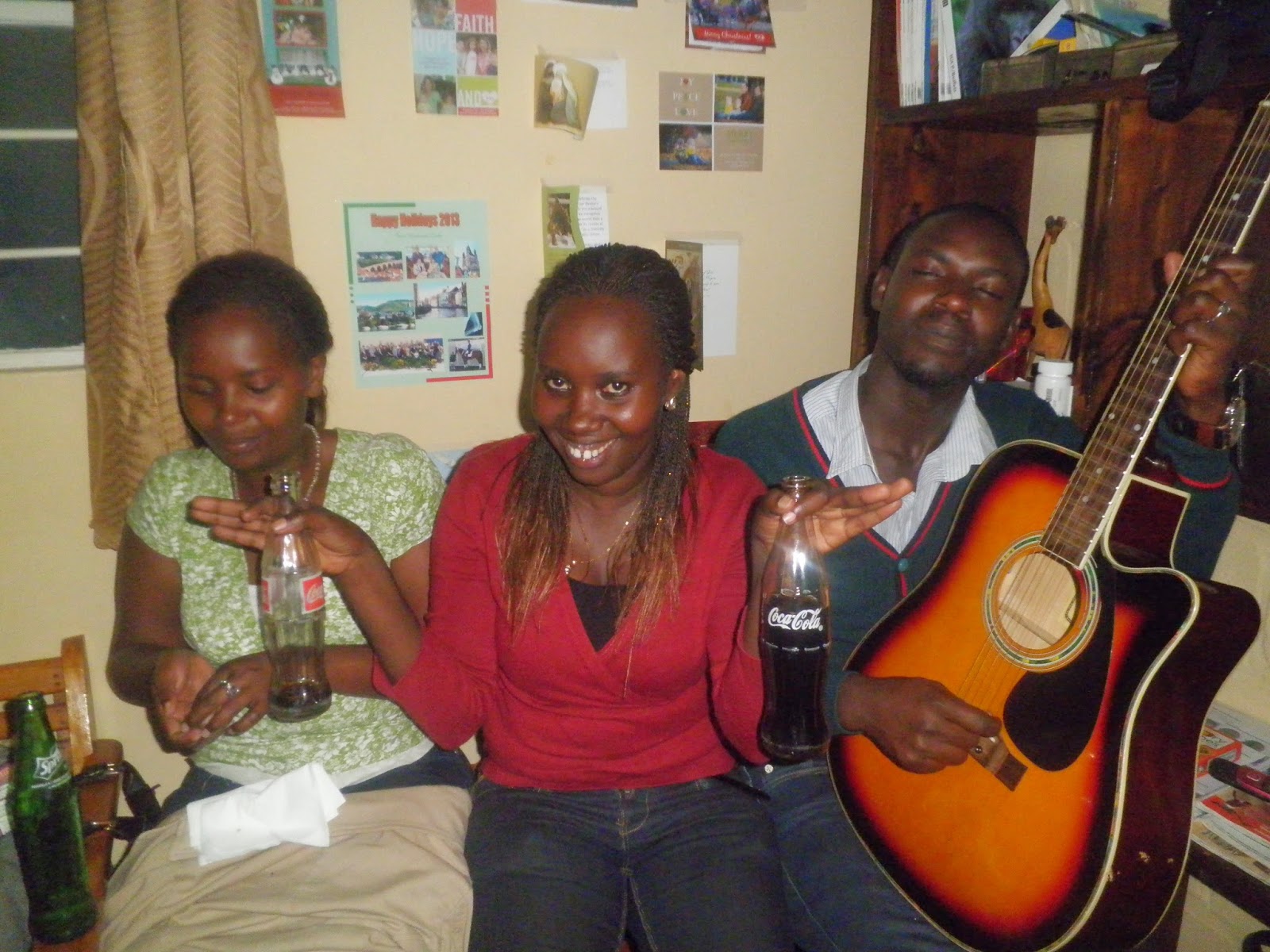 A few weeks back the young adult members of the Emmanuel Community and a few members of the university prayer group asked if they could throw a going-away party at Rita's and my house.  Even though I still had more than two months left in my contract and Rita, three, they wanted to have the party now because a lot of the young adults are students who would go home for the summer (one interesting cultural note is that the party was at our house, but it was thrown by others.  Culturally it is acceptable to ask others if on 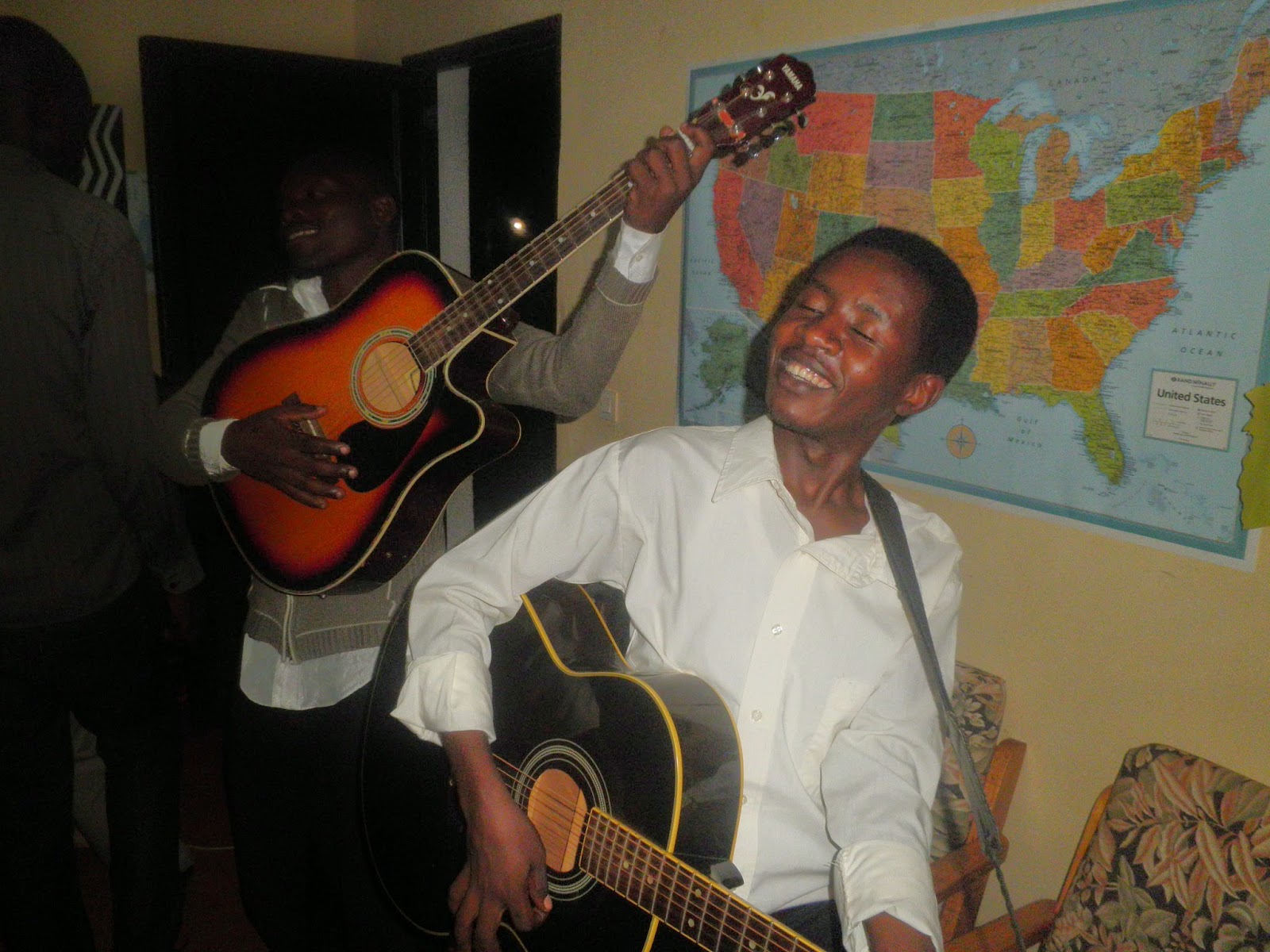 e can come to your house for dinner, a party, etc.  It puts the asked person on the spot, but it's nice to be the one asking).  We said yes so 25-30 people showed up at our house on a Tuesday night.  They brought crates of Fanta and beer, peanuts, and a huge speaker.  I put out the guacamole and brownies we had made and, voila, we had a party!  We sang and danced to Rwandan praise songs, then transitioned to Emmanuel praise songs, which was followed by eating and more dancing.  It was a holy house party!  And like most house parties, it kept our neighbors, the sisters and the family on the grounds, from sleeping.  Oops.