In February I traveled to the volcanic region of Rwanda to climb Mt. Bisoke, a dormant volcano that has a crater lake at the top.  Rita and I were felled during that trip by food poisoning so we resolved to make a second trip to the region, which we did this past weekend. 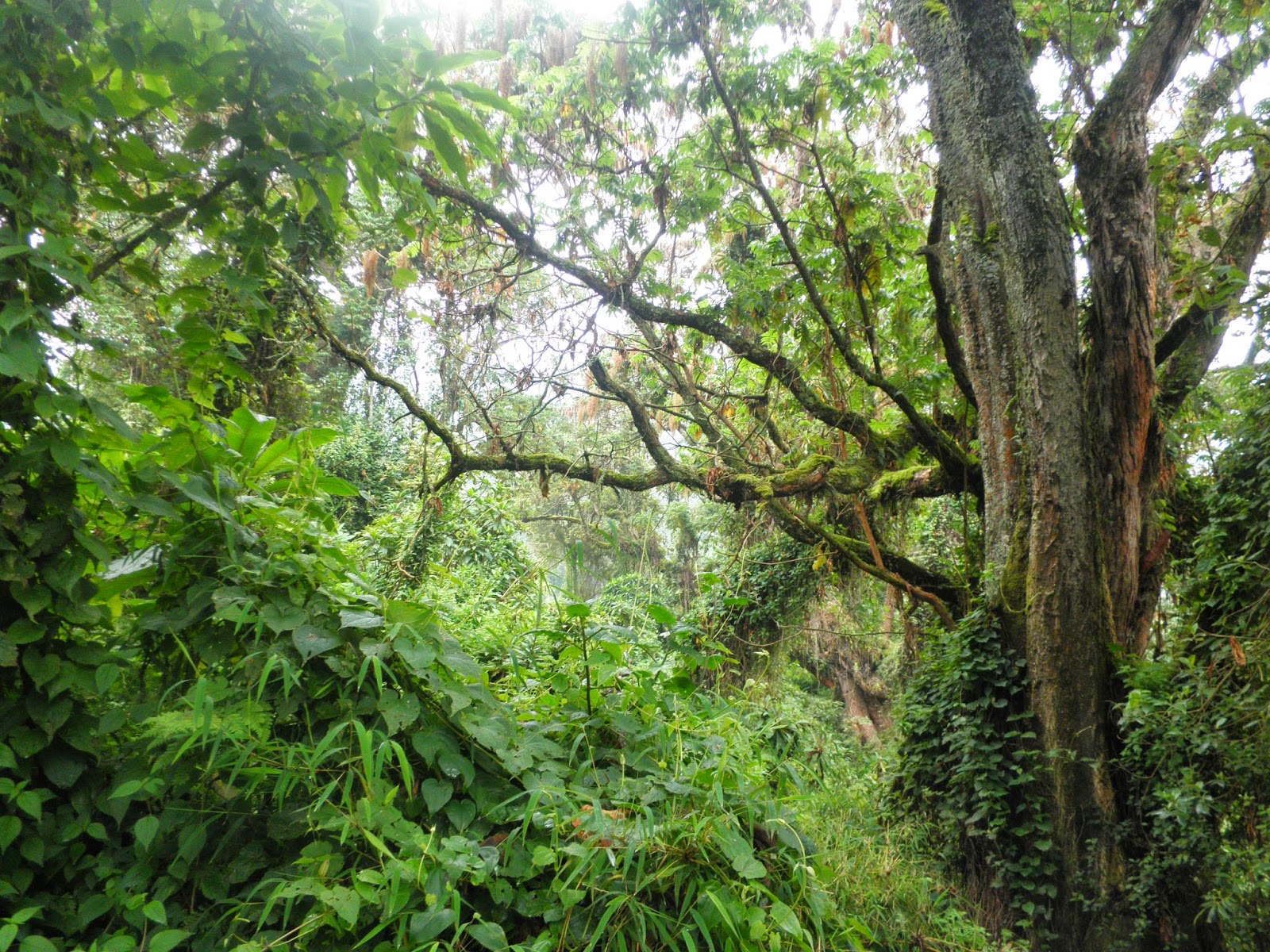 We traveled with Doug and Caron, a married American couple who live in Butare.  Caron and Rita decided to not attempt Bisoke so Doug and I got up early on Friday morning to be at the park headquarters by 7 am to meet our group and guide.  Here are some stats on Mt. Bisoke: only 9 km (5.6 mi) round-trip, 3900 ft of vertical gain, four hours up and three hours down, and in our case, lots and lots of mud.  It is supposed to be the dry season, which would make for a strenuous but pleasant hike, but since it rained the day before we arrived, this description from the Bradt guidebook is more accurate: "Far more demanding is the day hike to the 3,711 m peak of Mount Visoke, which is topped by a beautiful crater lake.  Departing from a car park at an altitude of around 2,500 m, the footpath up the mountain leads after one hour to a clearing that was used as a resting point by Dian Fossey en route to Karisoke.  From here, it takes another 2-3 hours to get to the peak, passing through lobelia and hagenia woodland, and following a path that is steep and muddy at the best of times, and outright treacherous after rain - you'll be sinking to your knees in the bog with almost every step, and do much of the descent sliding along on your butt."  Mud, mud, mud.  My shoes camouflaged with the soil after the hike, as you can see in one of the pictures.  It was one of those hikes that you are proud you did it in such terrible conditions, but you would never volunteer to do it again in such conditions.  We didn't sink in to our knees, but the mud often went right to the top of the shoe and only a quick pull out kept the mud from entering into it.  Sometimes a quick pull out almost resulted in the loss of the shoe in the mud.  It was crazy!  Luckily we were given bamboo hiking poles at the beginning of the hike and there was a porter, Emmanuel, who held onto one or two of the four of us tourists to keep us from falling on our butts every minute.  I still managed to fall on my butt two times in the first seven minutes of descent.
It's a good thing Doug and I survived the Bisoke hike in one piece because our group had a reservation to track gorillas the next day.  The highland mountain gorillas are the crown jewel of Rwandan tourism.  As a visitor pointed out, lots of African countries have savannahs for safaris, but only Uganda, the DR of Congo, and Rwanda have wild highland gorillas.  It really is something else to see a wild gorilla in its natural habitat without a zoo barrier separating us from it, and let me tell you, many people (1/3 of whom are Americans) are willing to pay a lot of money for the experience.  A non-resident foreigner pays $750 for the opportunity to trek through the jungle and spend one hour with a gorilla family and in the dry season, the permits are always sold out.  Wow, how the money flows in! 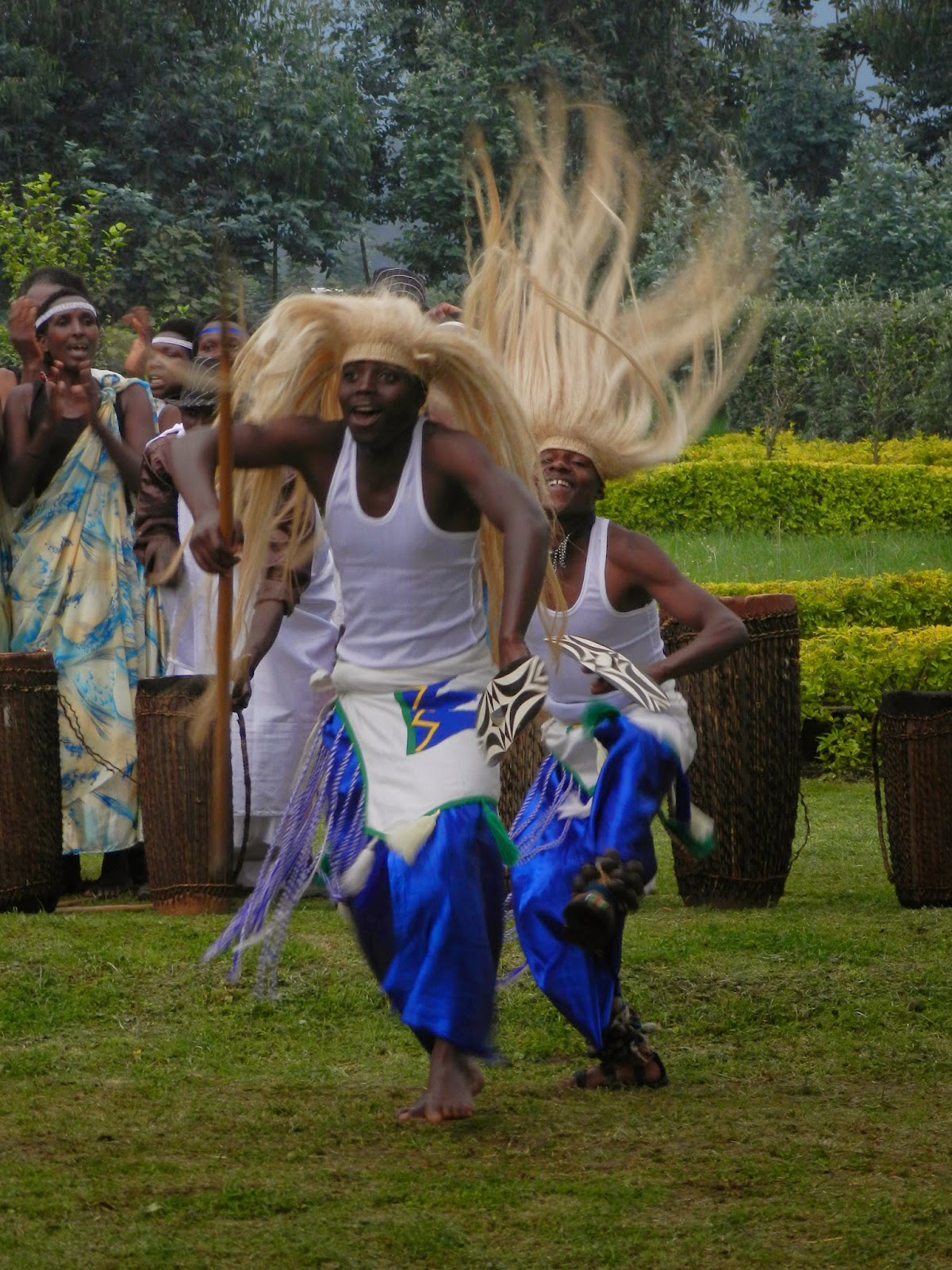 Since foreign residents don't have to pay nearly as much, Rita, Doug, Caron, and I took advantage of living in Rwanda to experience this once-in-a-lifetime opportunity.  Once again we gathered at the Volcanoes National Park headquarters at 7 am to check in and to enjoy the traditional dance show that is performed every morning for the visitors.  Then all the tourists were separated into groups of 8, the maximum number to visit each gorilla family, and my group of four was joined to four other Americans, a dad and son and a mom and son.  We loaded into our Land Cruisers and drove for 20 minutes along very rough, rocky, and rutted roads to the trek starting point.  Along with our group of 8, we had one guide, three soldiers with guns, and one porter.  We later joined up with three trackers who were following the gorillas since the early morning in order to tell our guide where to take us. 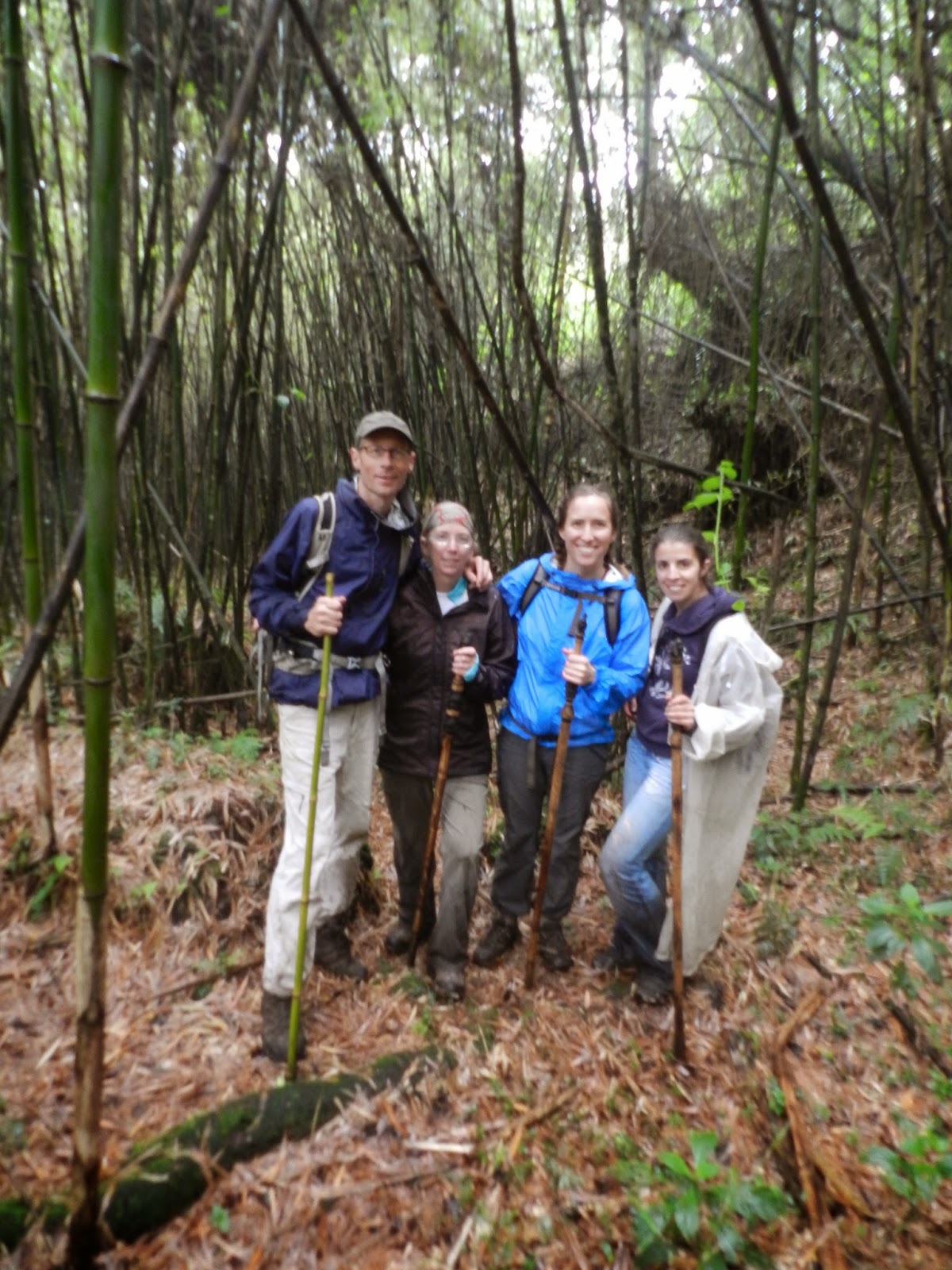 The hike was beautiful and so different than the vegetation on Bisoke.  We started by walking through fields and villages.  Once we climbed over the stone buffalo wall (built to keep the park's buffaloes from leaving the park and eating farmers' potatoes), we were in a bamboo forest.  It was raining by that point and the bamboo didn't do much to stop the rain from reaching us.  It promised to be a wet and cold day and that is what we got.  Thank goodness for synthetic hiking clothes.  Once we left the bamboo forest and ascended into the jungle, we were surrounded by leafy plants and plants that smelled like lantanas when broken. 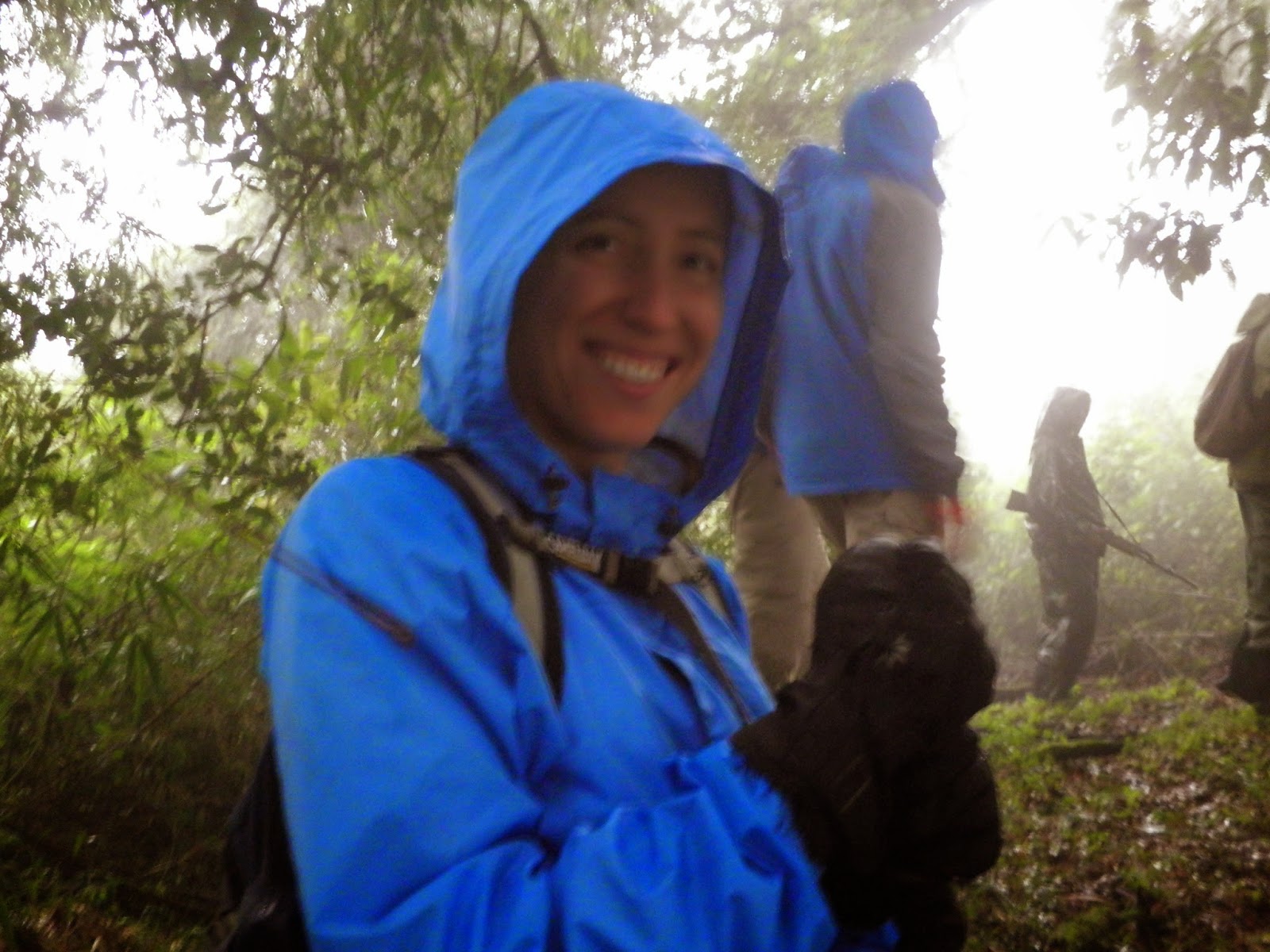 Our guide and one tracker used machetes to cut away plants covering the trail and later they used their machetes a lot to cut a new trail for us to follow.  That is how it is on a gorilla hike.  We hiked up to a certain point on a more-or-less established trail, but then the trackers told our guide that the silverback (the dominant male) was moving down to the creek bed so we had to backtrack and head down into the ravine to meet him.  Down the established trail we went, but then, at some point, we left the established trail and started slipping and sliding along the side of a mountain and then down the mountain to the creek bed.  I thought that part was pretty cool; it made the hike more of an adventure.  Once in the creek bed, we left our poles and backpacks (no food or drinks near the gorillas) in the care of the soldiers and hiked up the bed to where the silverback was enjoying a mid-morning leafy snack. 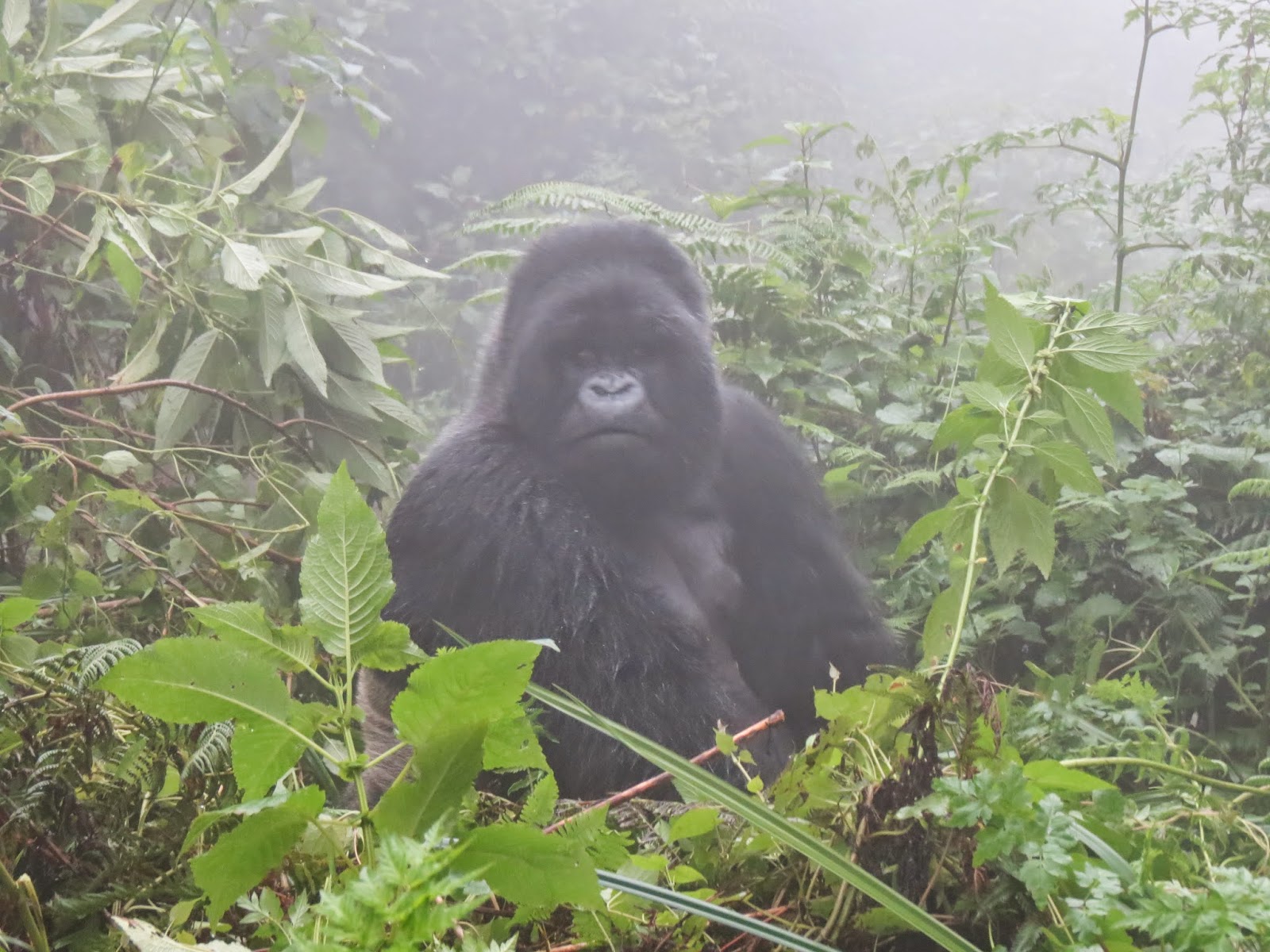 You can't even imagine what it's like to glance over a rock above you and see a 500 lbs silverback gorilla sitting there with his back to you.  He was huge, just like King Kong.  We walked around to his side and watched him chomping away on leaves.  The guide and the main tracker often made rumbling gorilla noises to appease him and keep him calm.  More than once, Mr. Lucky, as the silverback is called, hooted and then stood up to beat his chest.  Contrary to popular opinion, gorillas beat their chests with their open palms, not their fists.  The guide told us that is his way of calling his family (5 females and their babies) to come to his location.  He would beat; the females wouldn't come.  He'd move to a new place, eat, beat, and the females still wouldn't come.  Eventually he made his way back up the hill we had slid down and back up the trail we had come down so we followed him back up the hill and back up the trail.  He sat down and made himself comfortable, no longer eating, and seemed to be frustrated with these females of his who wouldn't listen to his call.

Once he settled down, we were able to get pretty close to Mr. Lucky, only 10-15 feet way from him.  It was amazing. I could see his huge potbelly and his face.  He would cross his arms and scratch his triceps.  He just sat there and waited for the females to come to him and eventually they did come. 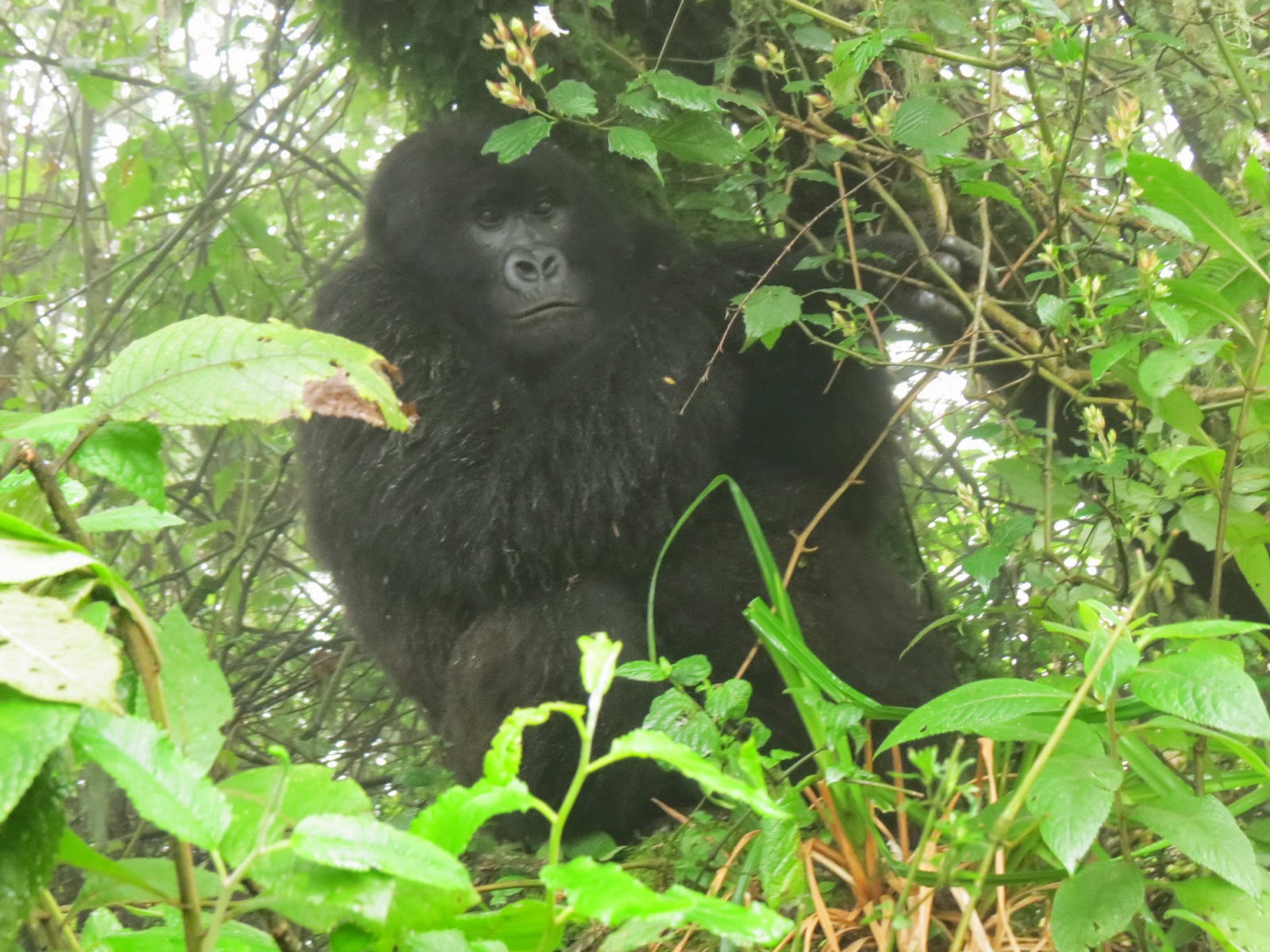 First there was a juvenile gorilla.  He put on quite a show for us, rolling around and thumping a tree with his feet.  Soon the twin two year olds showed up and a few big females.  A mom carrying the youngest baby in the park, a 1 1/2 month old, appeared very briefly holding her baby to her chest, but she moved on very quickly.  Two scary moments occurred when the silverback decided to move from his post by walking right towards the narrow trail our group was standing on.  We quickly scattered to move out of his way and he passed right by us.  Later one of the females did the same, choosing to walk right through where we were standing.  Rita even got bumped out of the way by one of the gorillas.  It sure is frightening to see a 300-500 lbs wild gorilla moving with speed and certitude in your direction, but what a cool experience too.  One humorous moment was when one of the babies, either one or two years old, walked right in front of some of us and started playing around on a rock.  It was like he was showing off for us.  Doug and I were only a few feet away from him (the park rule is to keep back 21 feet) because there wasn't any place for us to move back to. 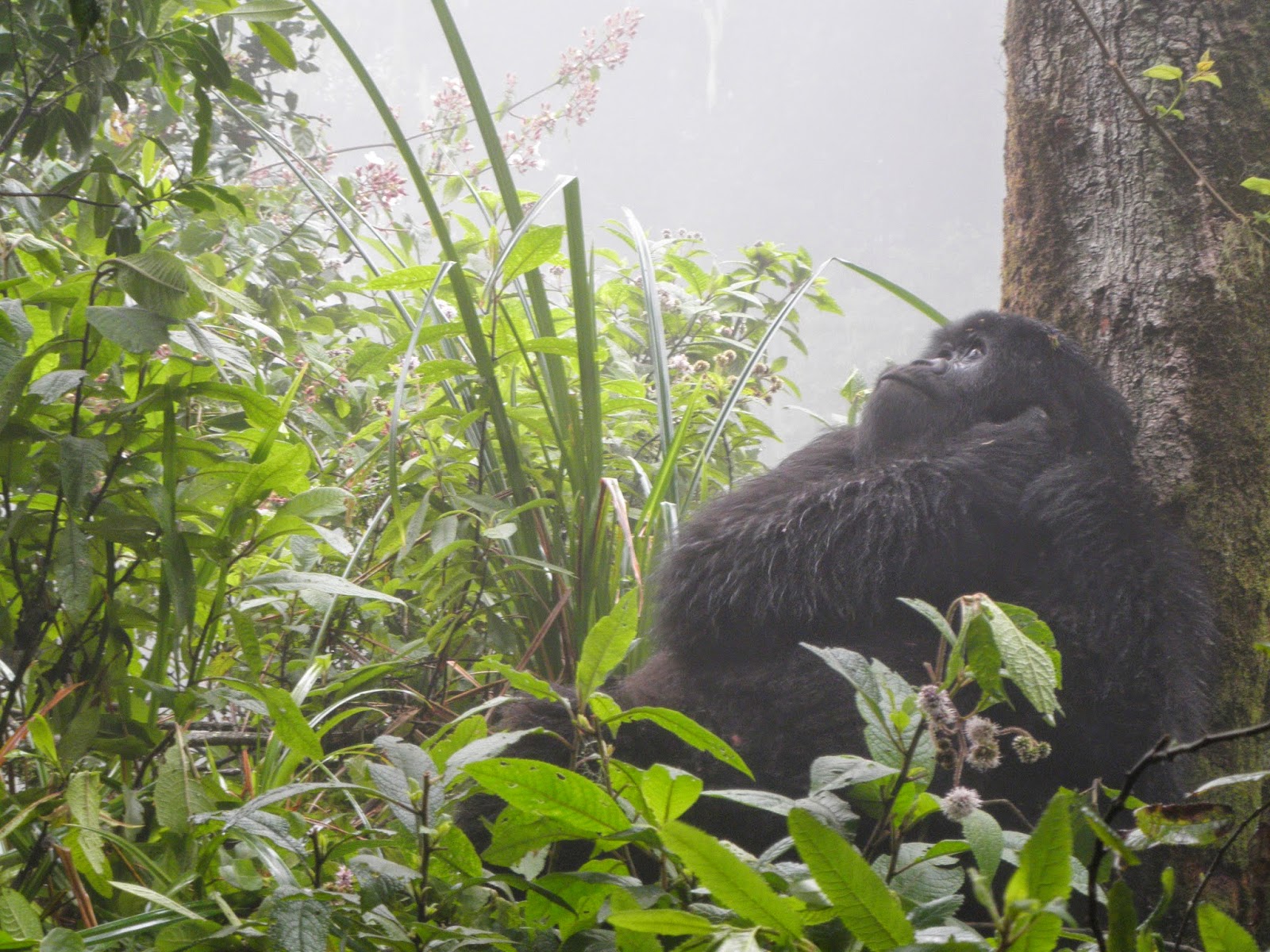 After at least 45 minutes tracking Mr. Lucky and at least 30 minutes with the family, we had to leave the gorillas to their normal life.  We walked back down the established trail and through the bamboo forest to the park boundaries.  We climbed back over the buffalo wall and walked through the fields and the villages.  Village children called out "Hello" to us and waved.  That is one thing I noticed going to the gorillas and to Bisoke.  So many more children waved at us and called out greetings than in any other part of Rwanda.  I guess the tourists are part of their daily entertainment, but seeing them was part of my daily enjoyment too.  Rwandan kids are so beautiful, affectionate, loving, etc, so it made my days to wave at them from the car or from the trail.  Man, how I will miss Rwandan children!  To show my appreciation for them, when we reached the cars, I pulled some candies out of my pack and gave them to the kids who were following us, including these three. 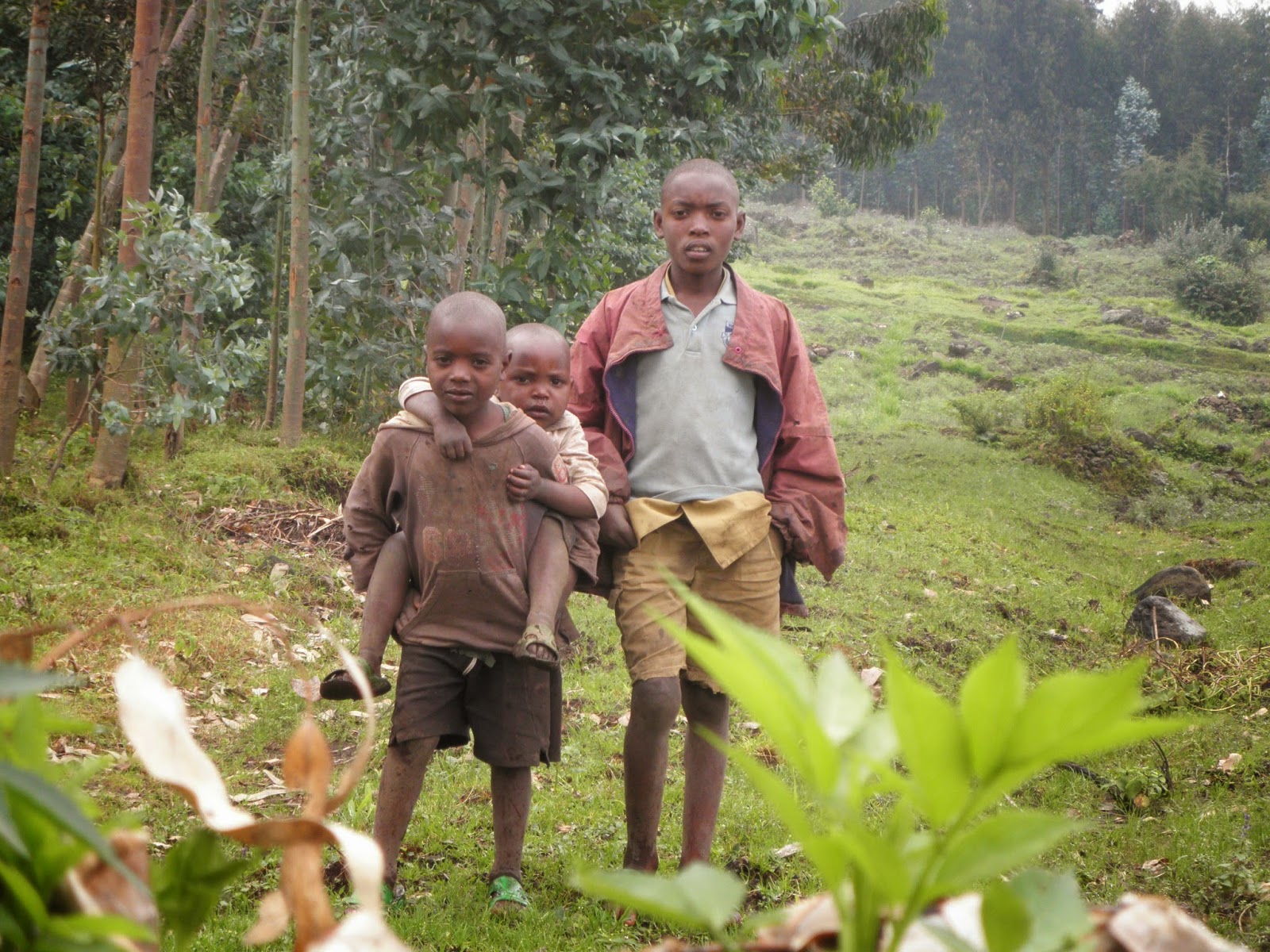