Great Shows of Hospitality and a Garden


One of the best words to describe my time in Rwanda thus far is "hospitality."  The Rwandans and the ex-patriots I know are so hospitable towards me and Rita.  Here is what the past week looked like when it came to hospitality:
As this week illustrates, the Rwandan people and the foreigners who band together love welcoming people into their homes.  This is a very social country and since I'm a social person who loves quality time with others, my love and energy tanks are often filled up.

Now switch to the garden.  Rita and I were busy bees yesterday and we succeeded in forming rows and  planting almost all of the seeds we plan to put into the ground.  Because we only had a hand spade and no shovel, I dug the trenches between the rows with my hands (the ground had been broken up and aerated the week before by men from the school) and Rita used the spade to move the cow fertilizer around into the trenches.  Once the rows were made, we got to work planting red onions, carrots, lettuce, parsley, cucumber, and cabbage.  I didn't take a picture of it yet, but I will soon.  We still have to plant corn, zucchini, and cilantro. 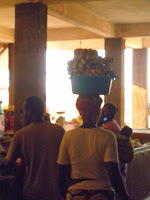 I'm sure it was quite an experience for the girls who saw us working in the garden because it's not so normal for white people to do it when there are people who will do the work for only $1.  One of the teachers told me earlier in the week that we could pay a man to plant the seeds for us, but when I told him that we wanted to do it, he asked why we would do it when there are men who will do the work for hardly anything.  I wanted the satisfaction of doing the work with my own hands and it was a good amount of work. It took more than two hours of work and I have some pink skin to show for it, but it felt good to work in the garden.  I even transported water to our plot by putting a big bucket of water on my head like the African women.  I'm sure the girls who saw that thought I was crazy, but when in Rwanda, do as the Rwandans do, right?
Posted by Heather Q. at 9:59 PM