Requests for the Girls 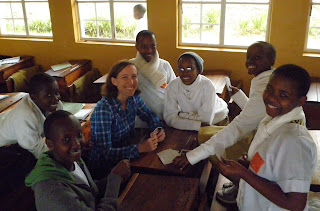 Today was the monthly visiting day for the families of the students so it was an exciting day for most of the students.  It also gave me a rare two hour segment of time when the girls were free and I was able to hang out with the girls whose families had already visited and left or whose weren't able to make it.  I brought a pack of cards with me to Rwanda so I taught some of them from senior 1, the youngest grade at the school, how to play Crazy 8's and Speed.  They aren't used to cards so the ordering of the face cards was new for them, but they picked the games up quickly.  I also taught them the song, Sanctuary, if you know it.

While I was spending time with the girls, I had more than one ask me if I have any books in English they can borrow.  I did bring a few with me to lend to the girls, but they are already lent out so I had to tell them "no."  So this brings up the first request.  I ask you to send at least one book to the students through me so I can say "yes" when they ask if I have books they can borrow.  I think all they have here at the school are Danielle Steel and local books recounting Rwandan stories.  Those are fine, but they are small like children's books.  I would like to offer them some of the best of our literary tradition, which could include The Chronicles of Narnia, Jane Austen (preferably with a modern translation), and To Kill a Mockingbird, as well as inspirational non-fiction.  These are just a few of the books or type of books that came to mind, but as long as they are books with good morals or moral lessons, I can lend anything out.  One book series that originally came to mind as one that would capture their interest was The Hunger Games, but then I thought about it and realized that it's quite gory and dystopic, perhaps not the best for inspiring them to holiness, although I think Katniss has her strengths.  So no Hunger Games or the like, please.  My address is BP 130; Huye, Rwanda.

The other request comes straight from the girls.  They would like to have pen pals.  It's possible they will ask their pen pal to sponsor their education, but I've communicated to the girls that pen pals and sponsors are distinct and that I would find them pen pals while I live here and perhaps sponsors when I return to the States.  So if you have a teenager at home or a class and would like a pen pal from Rwanda, please let me know.  I will see if I can arrange it (I just realized I haven't run the idea past the principal so I need to check on that before ensuring it will happen, but all the same, if you want one, let me know and I'll match you with someone if it is allowed).
Posted by Heather Q. at 6:47 PM