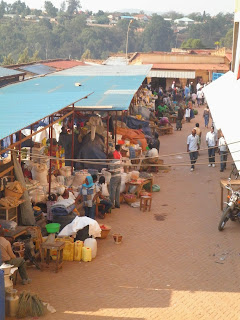 No photo depiction of Butare would be complete without many pictures of the various markets at which Rita and I shop.  We spend the bulk of our shopping time at a four-story market: produce and grains are on the ground floor; backpacks, mattresses, and home supplies on second floor; various shops on the third floor; and used clothing and shoes on the top floor.  Today I shopped on the second floor to replace the hand mixer of Rita's that I burned out while making butter and then we moved to the ground floor for our week's supply of produce.  There are three pictures in this post from the indoor/outdoor market. 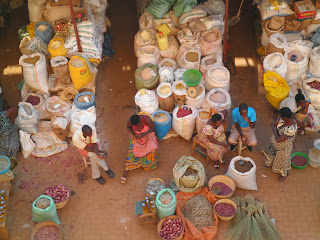 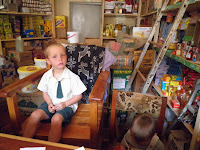 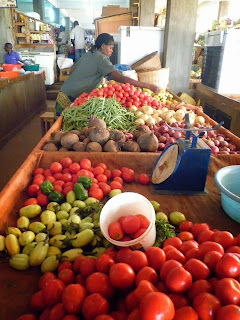 When we need products like rice, beans, oil, sugar, flour, and toilet paper, we go to a small store that is owned by the parents of one of the students at the school.  Somewhere in this post (putting pictures where I want them is more difficult with blogger.com than it was in the past) is a photo of two of the French family's children in this little store.  On this day, Vianney, the one in the chair, scored a piece of candy from the owner.  You can see how small it is and how the shelves are loaded with things.  We stand at the counter and tell the worker what we want and they bring it to the counter for us.  There is no negotiating at this store (negotiating is for the outdoor market), but we've been told they ask a fair price.  Below is a picture of the spread from our trip to the market this afternoon.  Check out how huge the zucchini is in the background.  I've never seen a small one here so we finally broke down and bought one so I can cook with it and harvest some seeds for the garden. 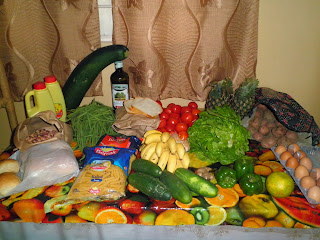 So that's the gist of our market experience.  Now to other views from the city, beginning with the roads, continuing with the Dr. Seuss trees, and ending with the Catholic cathedral.  The main road is asphalted and is in good condition.  I forgot to take a close up of the drainage ditches or trenches that run alongside every road here, but I was so intrigued by them when I first arrived.  Rwanda may not ha 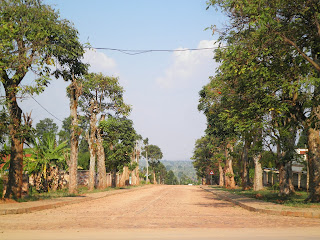 ve the same infrastructure as the US or Europe, but I think they do a good job with the ditches.  You can see one trench in the picture with the woman sitting on the back of a bike.  Some of the secondary roads have cobblestone with dirt in between the stones and sidewalks made of bricks or stones also.  These roads and sidewalks are in good enough condition that I can walk by the light of the moon without fear of tripping over a stone or falling into a hole where a brick is missing.  The other secondary roads are dirt and with the start of the rainy season a week or two ago, these roads are in pretty bad shape.  Ruts form when cars drive on them when they are muddy and that makes walking at night more treacherous.  It's a good thing there are lights on most cell phones in case I find myself without my headlamp.  [Let me just say for the mothers out there, especially my mother, that when I 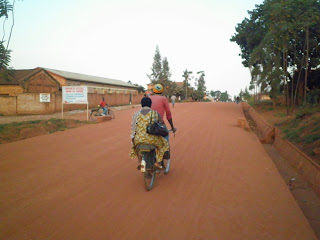 walk at night, I am with other people.  And besides, Butare is safer than some cities I've been to or worked in in the United States.  To support my opinion, let me include a passage from the Bradt guidebook to Rwanda, "As a lone female traveller, I have experienced far less hassle and anxiety in Rwanda during my several visits than I have in many other countries. ... In Kigali (more dangerous that Butare in my opinion) I've spent a lot of time walking both in and outside the city centre and never felt threatened."]  In the two road pictures above, the top one is a cobblestone road that runs off the main road between the school and downtown and the second one is a red dirt road on the way to the cathedral.  Check out the bicycle taxi.  He probably uses his bicycle to take huge sacks of produce to the market and then rides people around.  That is one form of public transportation I don't plan to utilize. 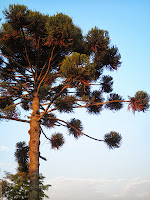 Now to the trees and the cathedral.  Here is one picture of a typical tree in Rwanda.  It is so weird to me; I am always reminded of something I would see in a Dr. Seuss book.  The green is at the end of the branches and even the green part is shaped like Medusa's hair. 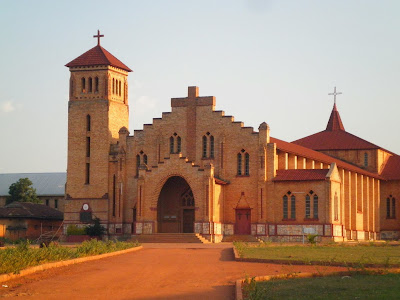 The cathedral was built in the 1930s and it is the largest cathedral in the country.  I once asked a Rwandan what is the name of the cathedral, but he said he didn't know.  Everyone just calls it the cathedral, including the guidebook I referenced above.  The outside is beautiful, but the inside is quite simple, especially the sanctuary/altar area.  The church is shaped like a T so people can sit on three sides of the altar when the church is packed. 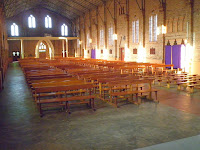 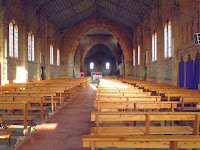 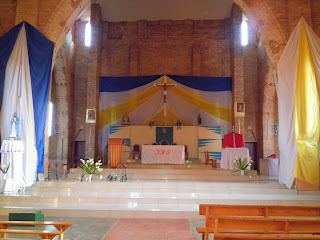